A truck driver provoked an accident with a passenger train number 14 Kiev - Solotvino at a railway crossing in the Transcarpathian region. 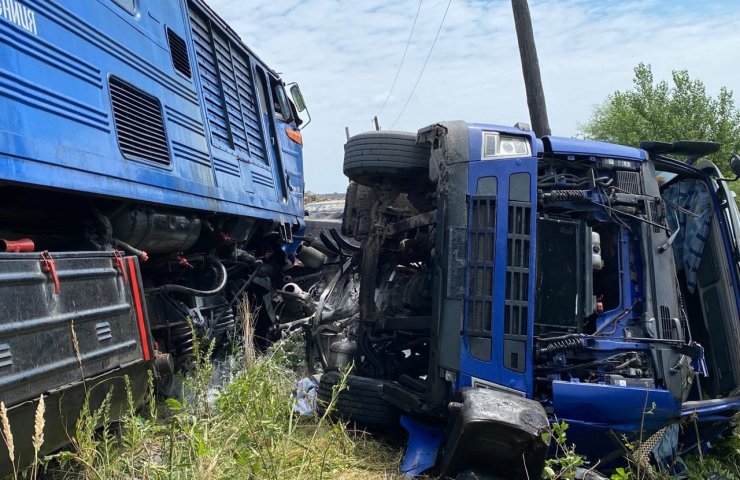 A traffic accident occurred today at about 12 o'clock on a regulated crossing of the Korolevo - Rokosovo stretch. With the crossing signaling working properly, the truck driver drove out on the track, causing a collision with a passenger train. The train's locomotive went off the rails with the first wheelset. According to preliminary information, several passengers contacted the doctors who work at the scene.

Also, a commission of the Ukrzaliznytsia left the scene of the accident, the National Police of Ukraine was called. Passengers of this flight will be delivered to Solotvino station by diesel train. Passengers of the return flight of the Solotvino - Kiev train will be transported by a diesel train to the Korolevo station, from where the train will go to the capital of Ukraine.

In case of delay of other passenger trains, Ukrzaliznytsia will inform additionally.

Recommended:
Energoatom will consider the possibility of producing small nuclear reactors NuScale in Ukraine
Ukrpromvneshekspertiza predicts a decline in scrap prices in Ukraine this week
Audi to suspend production at headquarters in Ingolstadt due to chip shortages
On this topic
Presidential "Big Construction" can reach the railways of Ukraine
Ukrposhta carried out the largest purchase of cars in the Ukrainian market
Nikola founder was suspected of buying a hydrogen truck project from a Croatian designer
INTERPIPE has allocated $ 2 million for the purchase of tests for coronavirus
At the Central railway station of Kiev have set up charging stations for electric vehicles
Gas production division of Naftogaz of Ukraine transferred UAH 1 billion in rent payments to the
Partner news
Сomments
Add a comment
Сomments (0)
News Analytics
Low-cost carrier Ryanair plans aggressive expansion in Ukraine16-09-2021, 21:34
Deutsche Bahn decided not to aggravate the situation with trade unions and will16-09-2021, 15:20
China to continue selling off its reserves to ease supply deficit16-09-2021, 15:44
Ten out of fifteen steel-making electric furnaces in Ukraine are idle -16-09-2021, 12:46
Australia will build its own nuclear submarines16-09-2021, 10:15
Moody's changes its outlook for the mining and metals industry from "positive"14-09-2021, 18:39
European steel prices decline from summer highs and remain stable high04-09-2021, 10:38
Rise in European steel prices to dizzying levels finally fizzled out - Bloomberg27-08-2021, 13:18
Gold continues to be the most efficient portfolio asset - WGC26-08-2021, 12:38
Falling iron ore prices caught Wall Street by surprise - WSJ23-08-2021, 13:57
Sign in with: