Representatives of Saudi Arabia visited the test bench of liquid-propellant rocket engines and the main assembly shop of launch vehicles in Dnipro. 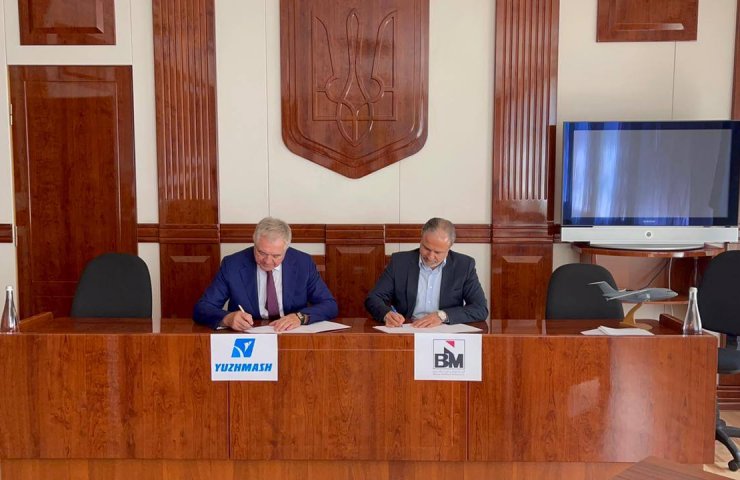 On July 16, within the framework of familiarization with the enterprises of the Ukrainian space industry, Yuzhny Machine-Building Plant named after Makarov (Yuzhmash) was visited by a delegation of National Building & Marketing Co., Saudi Arabia, headed by the Chairman of the Council of Ukrainian-Arab Cooperation, Mr. Talal Murad Al-As. The delegation was accompanied by the Chairman of the State Space Agency of Ukraine Volodymyr Taftai.

During the visit, the guests were shown a film about the production capabilities of Yuzhmash and a presentation of current and future projects of the enterprise. During the talks, the issue of further development of cooperation in the space industry was raised.

Members of the delegation visited the test bench of liquid-propellant rocket engines and the workshop of the main assembly of launch vehicles.

The final stage of the meeting was the signing of an agreement between Yuzhmash and National Building & Marketing Co. about further cooperation. The document was signed by the General Director of Yuzhmash Sergey Voit and Mr. Talal Murad Al-As.

After signing, Sergei Voit noted that this is an important step towards the development of relations between our countries. For his part, Mr. Talal Al-As thanked for the wonderful welcome and assured that the company's management is ready for fruitful cooperation.

Recommended:
In the next two weeks, full information on the use of Ukraine's subsoil will be published
The last pipe of Nord Stream 2 was welded in the Baltic Sea - gas pipeline operator
Dneprovsky metallurgical plant of Alexander Yaroslavsky sharply reduced the production of metal products
On this topic
Yuzhmash signed a contract for the supply of 10 more rocket engines for the Vega launch vehicle
Brazil is interested in the production capabilities of Yuzhmash
Ukraine and Australia have become one step closer in cooperation in the space sector
Yuzhmash told whether it is possible to launch reusable rockets from the Black Sea
Yuzhmash asks Ukrainian authorities to support the head of the national space Agency
CB "South" was visited by a delegation from China
Partner news
Сomments
Add a comment
Сomments (0)
News Analytics
Environmentalists filed claims against Metinvest plant in Kryvyi Rih for half a18-09-2021, 13:02
Coal production in Ukraine in January-August 2021 increased by 6%18-09-2021, 11:11
Viktor Pinchuk's metallurgical company Interpipe increased steel production by18-09-2021, 11:46
ArcelorMittal Kryvyi Rih will appeal environmental claims for over UAH 45018-09-2021, 11:43
State Environmental Inspection filed claims against ArcelorMittal Kryvyi Rih in17-09-2021, 10:28
Moody's changes its outlook for the mining and metals industry from "positive"14-09-2021, 18:39
European steel prices decline from summer highs and remain stable high04-09-2021, 10:38
Rise in European steel prices to dizzying levels finally fizzled out - Bloomberg27-08-2021, 13:18
Gold continues to be the most efficient portfolio asset - WGC26-08-2021, 12:38
Falling iron ore prices caught Wall Street by surprise - WSJ23-08-2021, 13:57
Sign in with: