Poisonous smoke moves towards Lützenkirchen, Opladen and Reindorf. Citizens are asked not to leave their homes and close the windows. 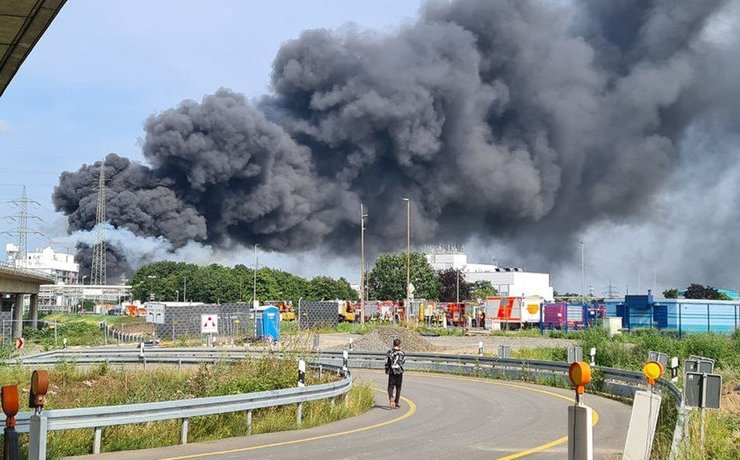 A powerful explosion occurred on the territory of the Bayer chemical plant in the German city of Leverkusen. Local residents reported on social media that the blast shook houses a few kilometers from the plant.

A column of smoke rises above the factory floor. Presumably, a waste disposal facility was damaged. Smoke moves towards Lützenkirchen, Opladen and Reindorf.

The authorities are asking the townspeople to avoid the dangerous area and stay tuned for updates. The Federal Office for Civil Defense and Disaster Relief (BBK) warns to close the windows tightly and not leave the house due to the risk of hazardous gas leaks.

The cause of the explosion has not yet been clarified. At the moment, there are also no reports of possible victims. A large number of firefighters are on duty at the site.

Recommended:
Energoatom will consider the possibility of producing small nuclear reactors NuScale in Ukraine
The first cars ordered by Ukrzaliznytsia at the Kryukovsky Carriage Works will be shown in Kiev
Steel production in Ukraine for 8 months of 2021 increased by 6.7%
On this topic
New lockdown plummets the German economy
An explosion thundered in the north of China, there are victims
Yuzhmash told whether it is possible to launch reusable rockets from the Black Sea
India intends to capture 60% of market utilization of military and civilian ships
The Pentagon acknowledges the delay in financing military aid to Ukraine
From the Prime Minister of Italy in Taranto required to close ILVA steel plant
Partner news
Сomments
Add a comment
Сomments (0)
News Analytics
State Environmental Inspection filed claims against ArcelorMittal Kryvyi Rih in17-09-2021, 10:28
US Steel will build an electrometallurgical plant with a capacity of 3 million17-09-2021, 10:48
Airbus begins designing a hydrogen-powered aircraft17-09-2021, 10:06
There are already 779 enterprises in Ukraine that officially carry out17-09-2021, 09:16
Low-cost carrier Ryanair plans aggressive expansion in Ukraine16-09-2021, 21:34
Moody's changes its outlook for the mining and metals industry from "positive"14-09-2021, 18:39
European steel prices decline from summer highs and remain stable high04-09-2021, 10:38
Rise in European steel prices to dizzying levels finally fizzled out - Bloomberg27-08-2021, 13:18
Gold continues to be the most efficient portfolio asset - WGC26-08-2021, 12:38
Falling iron ore prices caught Wall Street by surprise - WSJ23-08-2021, 13:57
Sign in with: