Ukraine has set a national record for pulling a dump truck

A unique sporting event took place at the site of the mining and transport workshop No. 1 of the Northern Mining and Processing Plant in Krivoy Rog, where eight of the strongest athletes of Ukraine challenged the American Caterpillar mining dump truck. 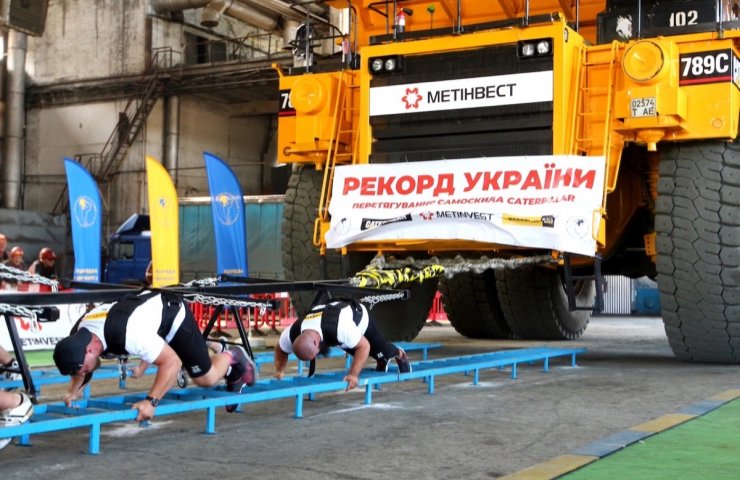 In Kryvyi Rih, eight strongest people of Ukraine have set a new national record for pulling a dump truck. It was timed to coincide with three significant dates at once - the 15th anniversary of Metinvest Group, the 30th anniversary of Ukraine's independence and the professional holiday - the Day of the Metallurgist and the Miner.

To warm up, the strongmen twice tried to move an empty dump truck weighing 156 tons. A so-called drawbar was tied to the car, to which four pairs of athletes were attached. Moving their legs and arms along a special ladder, they pulled the dump truck behind them.

“It is very significant that people who are really strong in spirit have gathered at the site. After all, miners' records are very similar to the records of weightlifters, ”commented Andrey Skachkov, General Director of Severny GOK.

After trial runs, the Caterpillar was loaded with rock, and the weight of the machine almost doubled. In the fight for a new national record, one of three attempts to stir up the career heavy truck was successful.

The panel of judges headed by Vasily Virastyuk recorded the result: eight people moved and pulled a dump truck weighing 293 tons over a distance of 44 centimeters in 53.78 seconds. Serhiy Konyushok, President of the Strongman Federation of Ukraine, noted that the achievement of athletes can also claim a place in the Guinness Book of Records.

Already on August 24, on the Independence Day of Ukraine, athletes will try to set a new record - to budge and stretch the Mriya plane.

Финансовая аналитика, прогнозы цен на сталь, железную руду, уголь и другие сырьевые товары. More news and analytics on Metallurgprom telegram channel - subscribe to get up-to-date market information and price forecasts faster than others.
Сomments
Add a comment
Сomments (0)
On this topic
Energy agencies of Ukraine and Germany have identified cooperation priorities
Metinvest will have to remodel roads and supply other excavators to change BelAZ trucks to
Energomashspetsstal successfully passed General Electric qualification
Energomashspetsstal will produce on the order of General Electric two qualifying billet
Kherson shipyard accepted for modernization two dry cargo vessels of the Dutch EEMS Werken
Railways in 2020 will buy the 40 locomotives General Electric
Recommended:
Russia will allocate more than $700 million for the production of domestic aircraft engines
UK extends ban on Russian gold imports
JSPL steel mill manager stoned to death
News Analytics
Australia and the UK aim to catch up and overtake China in the battery metal26-11-2022, 22:37
The United States imposed a ban on the import and sale of equipment from26-11-2022, 22:31
The pipe metallurgical plant in Nikopol continued to work after a short stop26-11-2022, 22:52
The state will not support the export of metals from Russia - Ministry of25-11-2022, 13:18
ArcelorMittal Kryvyi Rih suspends production due to shelling of energy25-11-2022, 12:04
Platinum market to face shortage next year - WPIC22-11-2022, 18:25
Global steel demand falls and will fall by 2.3% in 2022: WorldSteel19-10-2022, 23:12
Iron ore prices fall to 11-month low15-10-2022, 10:36
China production cuts in winter will give limited boost to steel markets -15-09-2022, 10:09
Steel prices may rise as manufacturers stop production11-09-2022, 14:06
Sign in with: