The new car, produced by the Kryukov Carriage Works, is capable of unloading bulk cargo independently in automatic mode. 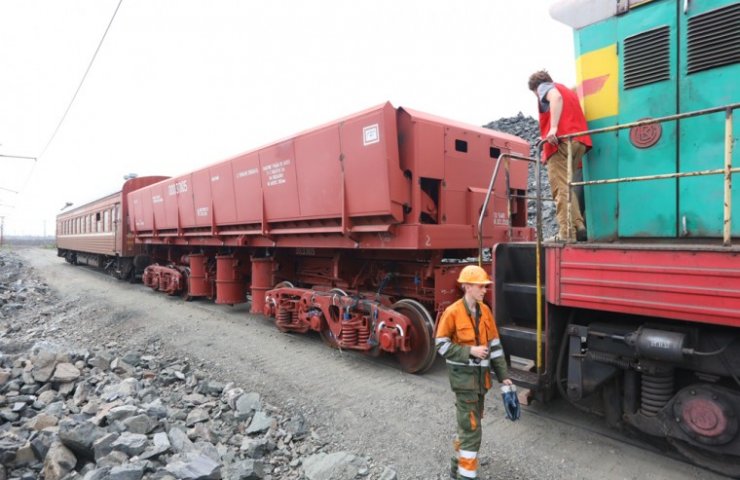 This spring, acceptance tests of a dump car (dump car) of model 33-7141 began - a sample of new products developed and manufactured by the Kryukov Carriage Works (KVSZ). And the other day they were continued in working conditions - on the tracks of the Poltava Mining and Processing Plant (GOK).

“At the plant, we tested a dump car in a busy mode. It was filled with crushed rock, which is much heavier than rubble or clay. Under such real production conditions, the dynamic, strength and braking characteristics of the prototype dump car were tested, ”said Vitaly Mikhailov, head of the electrical testing laboratory of the KVSZ design and design department.

Experts from the Research Institute of Carriage Building of the State Enterprise "UkrNIIV" took part in the tests at the GOK. They recorded the stress indicators on the car frame, folding sides, assemblies and fasteners during the movement of the dump car by industrial routes at various speeds.

At the production facilities of the GOK, a dump car was also tested for its ability to automatically unload with maximum filling of the body with moldboard. During the tests, the stresses arising in the attachment points on the frame and sides of the car were also recorded.

The dump car is loaded with an excavator, and it unloads itself automatically. According to Vitaly Mikhailov, the speed of automatic unloading of the model 33-7141 dump car is even higher than that of similar equipment currently operating at the GOK. And in terms of other functional characteristics, the car is not inferior to analogues.

“One of the most interesting stages of testing a dump car was the“ falling block ”test, - said Vitaly Valerievich. - A 300 mm thick layer of fine rock was preliminarily poured into the bottom of the car body. Then a block of rock weighing about three tons was dropped into the body from a height of three meters. This is how the body's resistance to deformation is checked. "

In general, at the Poltava mining and processing plant, the dump car successfully passed the test. Now he was taken to the KVSZ, where the final checks will be carried out. A prototype dump car will be loaded with crushed stone and impact tests will be carried out at a special "slide" stand on the territory of the test center to identify critical shock stresses. They occur when the car is lowered from the hump.

Scientists will analyze the data obtained during the complex tests of the dump car. Based on the analysis results, test reports will be drawn up. On their basis, the interdepartmental commission will decide on the provision of permits for the serial production of dump cars.

Recommended:
Ukraine and the European Union signed a Memorandum on the supply of strategically important raw materials and metals
Vice President of the European Commission visited the Irshansk ore mining and processing plant in Ukraine
Kharkov plant "Turboatom" can be renamed to "Ukrainian power machines"
On this topic
The representative of the Kryukov Carriage Works announced the critical situation in the industry
The third diesel train of the DPKr-3 series produced by KVSZ went for testing
Krukovka Carriage Works has sent a 1,500th mineral locomotive to a Belarusian customer
KVSZ checked its readiness for serial production of new flatcars
Ukrzaliznytsia started mass production of brake pads
New diesel train of Ukrainian production drove through the gates kvsz
Partner news
Сomments
Add a comment
Сomments (0)
News Analytics
Workers of Novokramatorsk Machine-Building Plant vaccinated with American27-07-2021, 15:01
Kharkov plant "Turboatom" can be renamed to "Ukrainian power machines"27-07-2021, 15:33
At least one person died and four went missing in an explosion at a chemical27-07-2021, 15:25
A powerful explosion thundered at the Bayer chemical plant in the German city27-07-2021, 12:56
Steel raw materials prices decline in all regional markets27-07-2021, 11:57
Steel raw materials prices decline in all regional markets27-07-2021, 11:57
On the regional markets of metallurgical products, prices are balancing in a22-07-2021, 16:22
Demand for armaments will ensure a stable growth of armored steel sales by 4%20-07-2021, 10:10
Protectionist Measures Support European Steel Prices Despite Summer Lull19-07-2021, 11:02
Positive price growth is observed in the markets for metallurgical products16-07-2021, 14:12