The guests from the USA got acquainted with the workshop of the main assembly of launch vehicles in Dnipro, where they examined samples of rocket and space technology. 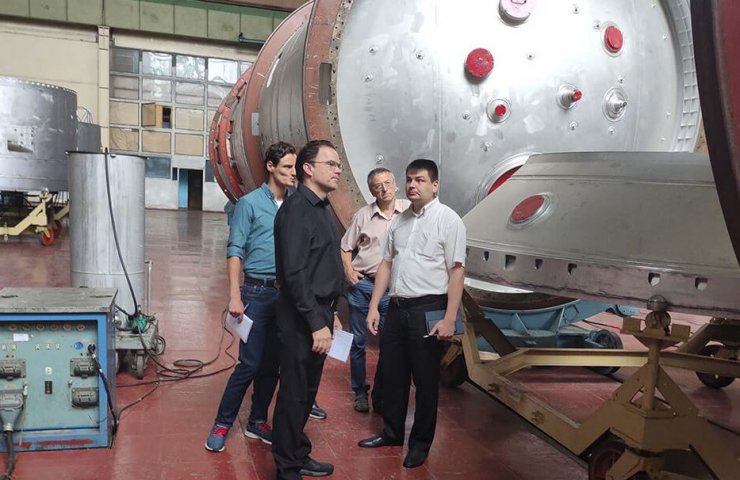 The guests from the USA got acquainted with the workshop of the main assembly of launch vehicles in Dnipro, where they examined samples of rocket and space technology.

After getting acquainted with the production, the guests were shown a film about the production capabilities of YUZHMASH and a presentation of current and promising projects. During the negotiations, the management of the enterprise raised issues of possible cooperation in the space sector.

In turn, Mr. Ferring made a presentation in which he spoke about the new developments of the FireFly company for the exploration and use of outer space for peaceful purposes. Also, Mr. Ferring proposed to continue discussing areas of cooperation during the visit of the YUZHMASH delegation to the United States at the next launch of the Antares launch vehicle.

Recall that the American supplier of fuel-efficient launch vehicles Firefly in 2019 ordered components for missiles at YUZHMASH for a total of about 15 million dollars. Among other things, the Ukrainian company was supposed to supply 100 combustion chambers, 500 units of automation and 40 turbopumps to the United States. However, nothing more was reported later.

Recommended:
The Antimonopoly Committee launched a case against the Metallurg Zaporozhye football club
In August, Ukraine increased its foreign exchange earnings from the export of scrap metal 40 times
Ukrainian Foreign Ministry summoned the Hungarian Ambassador over an agreement with Gazprom
On this topic
Yuzhmash signed a memorandum of cooperation with the Saudi company National Building & Marketing Co
Brazil is interested in the production capabilities of Yuzhmash
Max Polyakov's Firefly Aerospace plans two launches of the Alpha space rocket in 2021
Yuzhmash told whether it is possible to launch reusable rockets from the Black Sea
Booster Firefly Aerospace caught fire during testing
Firefly Aerospace ordered at the Pivdenmash missile parts to $ 15 million
Partner news
Сomments
Add a comment
Сomments (0)
News Analytics
Free access to data on special permits for the use of subsoil was opened in28-09-2021, 18:27
Zaporozhye iron ore plant modernized crushing and sorting plant28-09-2021, 16:48
The development of industrial parks will allow to completely restart the28-09-2021, 16:19
Ukrainian Foreign Ministry summoned the Hungarian Ambassador over an agreement28-09-2021, 12:43
ArcelorMittal to Build a Billion Euro Waste Blast Furnace in Belgium28-09-2021, 12:16
Oil prices to surpass $ 90 by year end due to shortages - Goldman Sachs27-09-2021, 10:58
Moody's changes its outlook for the mining and metals industry from "positive"14-09-2021, 18:39
European steel prices decline from summer highs and remain stable high04-09-2021, 10:38
Rise in European steel prices to dizzying levels finally fizzled out - Bloomberg27-08-2021, 13:18
Gold continues to be the most efficient portfolio asset - WGC26-08-2021, 12:38
Sign in with: