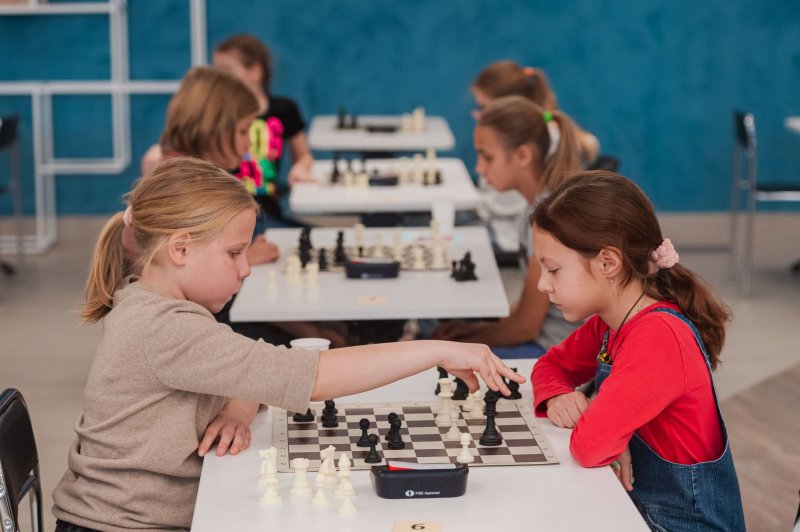 In Verkhnyaya Pyshma, boys and girls in the age groups up to 10 and up to 13 years old played the "UMMC Cup" in rapid chess. Competitions were held in the children's technopark "Quantorium" and were dedicated to the birthday of the Ural Mining and Metallurgical Company.

Rapid chess, or rapid, differs from classical chess by limiting the time for thinking over moves - from 10 to 60 minutes. Therefore, opponents have to not only think about how to play, but also demonstrate quick reaction, as well as stress resistance. In the UMMC Cup tournament, the participants were given no more than 10 minutes plus 5 seconds.

“Chess is a popular sport, and in the Sverdlovsk region chess is developing with giant strides, and today we have international results. But this is the tip of the iceberg: the platform of success is such tournaments as the one that is being held now, ”said Sergei Nabokikh, Acting Minister of Physical Culture, Sports and Youth Policy of the Sverdlovsk Region. - For the first time, the competition is held in such a wonderful place as Quantorium - the center of reason and logic, which has everything you need for chess. We must pay tribute to UMMC, which has always supported various sports, including chess, and today the strongest young chess players of the Sverdlovsk region have been gathered in Verkhnyaya Pyshma. ”

“ Today's tournament is dedicated to the birthday of the Ural Mining and Metallurgical Company , - emphasized the Deputy Director for Personnel and General Issues of UMMC Vera Zakopailova. - Chess is a wonderful type of variety, but in addition to it, our company also supports table tennis, and sambo, and hockey, and basketball. Why are we doing this? Because children are our future, and sport is health. We want our children to be healthy and happy. We hope that the young participants of the chess tournament will enjoy everything with us, and they will come to Verkhnyaya Pyshma more than once to demonstrate their increased skill and please with their successes. ”

ranks will be assigned, so the competition was preceded by a tough selection, and only 180 out of 290 applications were satisfied. So, despite their young age, real professionals play here, ”said the director of the Ural Chess Academy, vice president, executive director of the Sverdlovsk Region Chess Federation Albert Stepanyan.

In the course of stubborn fights among girls in the category up to 10 years, the third place was taken by Alesya Levenskikh (Yekaterinburg), the second - by Masha Klescheva (Verkhnyaya Salda), and Glafira Litvinkova (Yekaterinburg) became the best of the participants ... Among boys under 10 years old, the entire podium was taken by guys from Yekaterinburg: Grisha Latypov won bronze, Sasha Erofeev - silver and Vanya Golikov - gold.

Among the older participants, under 13 years old, Nastya Krylova became the best girls (Yekaterinburg), who took the third place in the standings, the second went to her fellow countrywoman Ulyana Melkozerova in a bitter struggle, and the first to Karolina Konyakhina from Revda. Among the boys, the winners were Ivan Kropachev (Yekaterinburg) - third place, Yegor Gordeev (Pervouralsk) - second place and Prokhor Moskvinov (Yekaterinburg) - first place.

The winners and prize-winners of the tournament were awarded with cups, medals and cash prizes. /p>

Финансовая аналитика, прогнозы цен на сталь, железную руду, уголь и другие сырьевые товары. More news and analytics on Metallurgprom telegram channel - subscribe to get up-to-date market information and price forecasts faster than others.
Сomments
Добавить комментарий
Комментарии (0)
On this topic
Young athletes fought for the prizes of the children's hockey tournament dedicated to the memory of
An open day was held at the UMMC Technical University
The Palace of Technical Creativity opened in Verkhnyaya Pyshma
The eternal flame from the factory furnace, Victory Waltz, Procession of military equipment and a
The X Spartakiad of schoolchildren "Healthy Generation" ended in Verkhnyaya Pyshma
All-Russian table tennis competition "Step into the future" started in the Sverdlovsk
News Analytics
The Belarusian steel plant was visited by the Ambassador of Kazakhstan to06-07-2022, 17:44
US steel prices fall to December 2020 levels06-07-2022, 13:40
Interpipe mastered a new type of railway wheels for the EU market06-07-2022, 12:15
Tesla in the second quarter reduced the supply of cars by 18%04-07-2022, 10:24
Steel prices fall due to weakening European demand and problems in China04-07-2022, 10:40
High iron ore shortage could halt metallurgy's green transition28-06-2022, 14:02
Price volatility hits global steel market27-06-2022, 19:28
Recovery in China could be key to rising global steel prices - MEPS24-06-2022, 14:00
Conflict in Ukraine spurs Europe's drive for clean energy03-06-2022, 12:14
US steel market sentiment becomes more price neutral05-05-2022, 10:15
Sign in with: