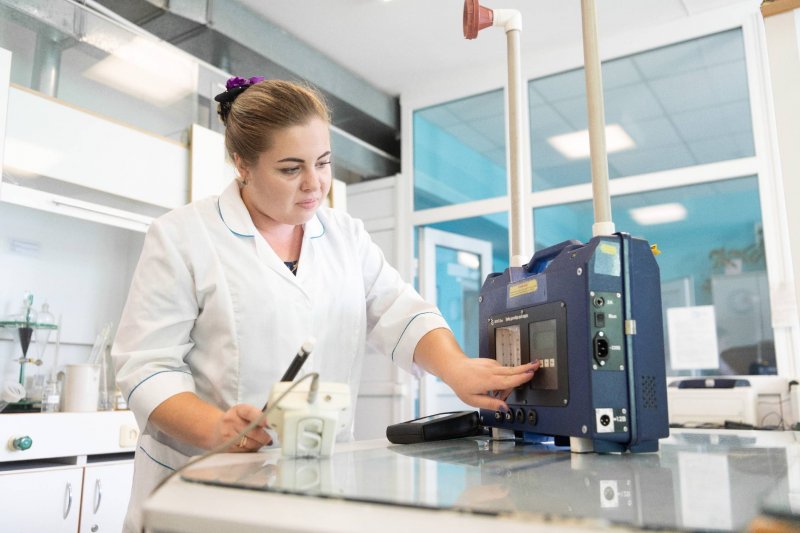 Specialists of the Department of Ecology and the accredited Sanitary and Ecological Laboratory of Vostochny Port JSC summed up the results of the systemic air quality control in the zones of the enterprise's economic activity. The analysis for the 3rd quarter of 2021 showed the efficiency of the dust suppression systems at the complexes and once again confirmed the compliance of air quality with the requirements of the environmental and sanitary legislation of the Russian Federation.

From the beginning of July to the end of September, environmentalists took almost 700 air samples for the indicators "suspended matter" and "coal dust" - about 30 in the working area next to stationary and mobile sources, 390 at the boundaries of the sanitary protection zones of the enterprise and over 280 in the places of direct work on unloading wagons, sorting and loading coal on ships on indicators "carbon dust". The results of atmospheric air monitoring in 2021 and in previous years show full compliance with the norms of Russian environmental legislation. At the same time, the efficiency of air purification in production, after the modernization of aspiration equipment, which was carried out as part of a set of environmental measures aimed at minimizing the impact of coal transshipment on the environment, is about 96-98%, experts of the Ecology Department of Vostochny Port JSC note. .

The basis of the company's environmental safety system is a complex of dust and wind protection structures up to 23 meters high and more than three kilometers long. These are the largest defensive structures in the Far East at the present time. When designing them, mathematical modeling of the wind rose in Wrangel Bay was carried out, and only then work began on the installation of equipment. Today the protective screens of Vostochny Port JSC make it possible to provide dust suppression by more than 90 percent. Wind protection is complemented by aspiration systems, dry fog and water irrigation installations, thermal imagers and snow generators. All-season mobile dust suppression systems have been successfully tested and are being introduced into production at warehouse areas: self-propelled gantry complexes moving on rails with powerful snow generators. It is worth noting the introduction of the latest dust suppression system on warehouse machines, stackers and reclaimers, based on finely dispersed water spraying, which in Russia is installed only at the production facilities of Vostochny Port.

Vostochny Port JSC at all stages of coal transshipment to sea transport uses a set of the best available technologies that minimize the impact of production activities on the environment. In particular, these are closed car dumpers, covered conveyor lines, transfer stations with aspiration systems, as well as ship-loading machines equipped with a local and all-season coal flow irrigation system, which ensure hermetic loading of coal into the holds of ships.

The environmental safety of the enterprise is also ensured by aspiration systems, dry fog systems and irrigation of coal piles with water cannons and snow generators. Along the perimeter of the terminal, 20-meter metal windscreens with a total length of 3 kilometers are installed. Today these are the largest defensive structures in the Far East.

Vostochny Port JSC is a coal terminal in the Far East, certified in accordance with the requirements of the international standard ISO 14001: 2015 “Environmental management systems. Requirements and guidance for use ”.

At the beginning of September 2019, the third stage of a specialized coal complex was commissioned, which will increase the volume of transshipment to 50-55 million tons per year. The largest private investment port project worth over 40 billion rubles. implemented without government funding. The third stage is more than 600 newly created highly qualified jobs and about 25 billion rubles. tax deductions to the budget until 2026.

In order to facilitate the implementation of urgent projects aimed at the social development of the Wrangel microdistrict, Vostochny Port JSC has established the Vostochny Port Social and Environmental Initiatives Support Fund. The Foundation is a platform for direct, open dialogue with the residents of Wrangel, an effective mechanic

Финансовая аналитика, прогнозы цен на сталь, железную руду, уголь и другие сырьевые товары. More news and analytics on Metallurgprom telegram channel - subscribe to get up-to-date market information and price forecasts faster than others.
Сomments
Добавить комментарий
Комментарии (0)
On this topic
JSC "Vostochny Port" has confirmed its high efficiency in the field of water use by
The results of eco-monitoring in 2021 confirmed the high quality of water in Vostochny Port JSC
JSC "Vostochny Port" modernizes the management of the aspiration system at a specialized
JSC "Vostochny Port" will support scientists in the study and conservation of coastal
In October 2021, Vostochny Port handled a record 2.947 million tons of cargo
The TMK Board of Directors recommends accepting the voluntary offer of the TMK subsidiary in
News Analytics
The Belarusian steel plant was visited by the Ambassador of Kazakhstan to06-07-2022, 17:44
US steel prices fall to December 2020 levels06-07-2022, 13:40
Interpipe mastered a new type of railway wheels for the EU market06-07-2022, 12:15
Tesla in the second quarter reduced the supply of cars by 18%04-07-2022, 10:24
Steel prices fall due to weakening European demand and problems in China04-07-2022, 10:40
High iron ore shortage could halt metallurgy's green transition28-06-2022, 14:02
Price volatility hits global steel market27-06-2022, 19:28
Recovery in China could be key to rising global steel prices - MEPS24-06-2022, 14:00
Conflict in Ukraine spurs Europe's drive for clean energy03-06-2022, 12:14
US steel market sentiment becomes more price neutral05-05-2022, 10:15
Sign in with: