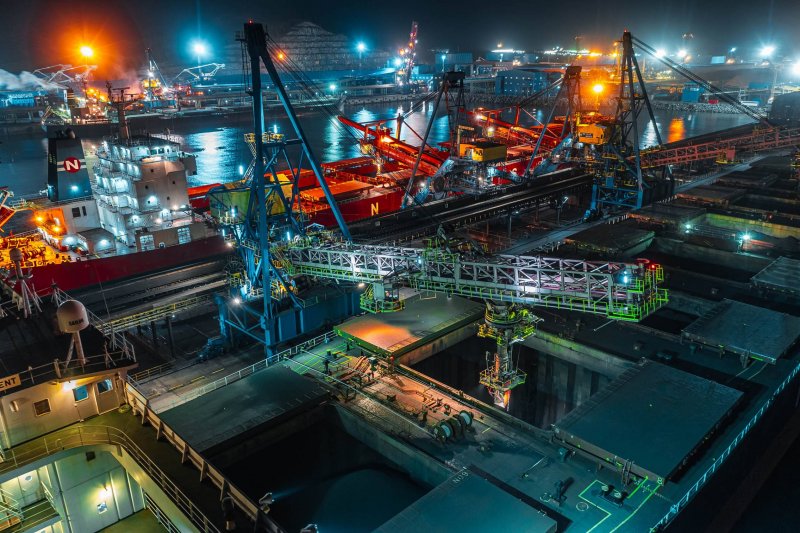 Vostochny Port JSC, the largest stevedoring company in the Russian Far East, has set its own record in terms of monthly shipments in the entire history of the enterprise. In October 2021, Vostochniki loaded on ships 2,947,214,813 tons of general cargo - 2,831,335 tons of coal, 87,659 tons of metal products, 22.904 tons of crushed stone and 5,315.983 tons of containerized cargo (1217 TEU). At the same time, on October 21, 2021, the Port set the maximum record for unloading wagons in the winter period, which amounted to 1478 units of rolling stock. which is used in JSC "Vostochny Port", as well as the well-coordinated work of all divisions and employees of the stevedoring enterprise. According to the results of the past month alone, more than 1 million tons of premium coal products were shipped from the 51st berth of the Third Stage of the specialized coal complex - an unprecedented figure since the commissioning of an ultra-modern production site in 2019.

At the same time, It is worth noting that in 2020 Vostochny Port JSC launched a process of deep modernization and transformation of the universal terminal of the production and transshipment complex (PPK1) into a multimodal export-import hub. Currently, two berths are in operation here, the current capacity is 29 thousand TEU per year. In 2022, as part of the second stage, three berths will be allocated, taking into account the modernization and purchase of new equipment, the capacity of the complex will reach 87.6 thousand TEU. The third stage, which assumes full-scale use of all four berths, will increase the capacity to 116.8 thousand TEU. Container trains are already being formed on PPK1 railway tracks. Investments in infrastructure at the second stage will amount to 463 million rubles, at the third - 346 million rubles.

- Today we are actively working to diversify our business towards containerization, we plan to attract all cargo, including containerized cargo, to "Vostochny Port". All cargoes are important for the country, - emphasizes Irina Olkhovskaya, director for port and railway projects of UMMC.

Vostochny Port JSC at all stages of coal transshipment to sea transport uses a set of the best available technologies that minimize the impact of production activities on the environment. In particular, these are closed car dumpers, covered conveyor lines, transfer stations with aspiration systems, as well as ship loading machines equipped with a local and all-season coal flow irrigation system, which ensure hermetic loading of coal into the holds of ships.

Environmental safety of the enterprise is also provided by aspiration systems, dry fog systems and irrigation of coal piles with water cannons and snow generators. Along the perimeter of the terminal, 20-meter metal windscreens with a total length of 3 kilometers are installed. Today these are the largest protective structures in the Far East.

Vostochny Port JSC is the first coal terminal in the Far East, certified in accordance with the requirements of the international standard ISO 14001: 2015 “Environmental management systems. Requirements and application guidelines. ”

In early September 2019, the third stage of a specialized coal complex was commissioned, which will increase the volume of transshipment to 50-55 million tons per year. The largest private investment port project worth over 40 billion rubles. implemented without government funding. The third stage is more than 600 newly created highly qualified jobs and about 25 billion rubles. tax deductions to the budget until 2026.

In order to facilitate the implementation of urgent projects aimed at the social development of the Wrangel microdistrict, Vostochny Port JSC has established the Vostochny Port Social and Environmental Initiatives Support Fund. The Foundation is a platform for direct, open dialogue with the residents of Wrangel, an effective mechanism for supporting social work. Currently, within the framework of the Fund, 12 programs have been identified: "Veterans", "Volunteers", "Children", "Spiritual Development", "Health", "Historical Heritage", "Team of the East", "Comfortable Environment", "Culture", "Education", "Social support", "Sports".