A reporting trade union conference was held at BMZ 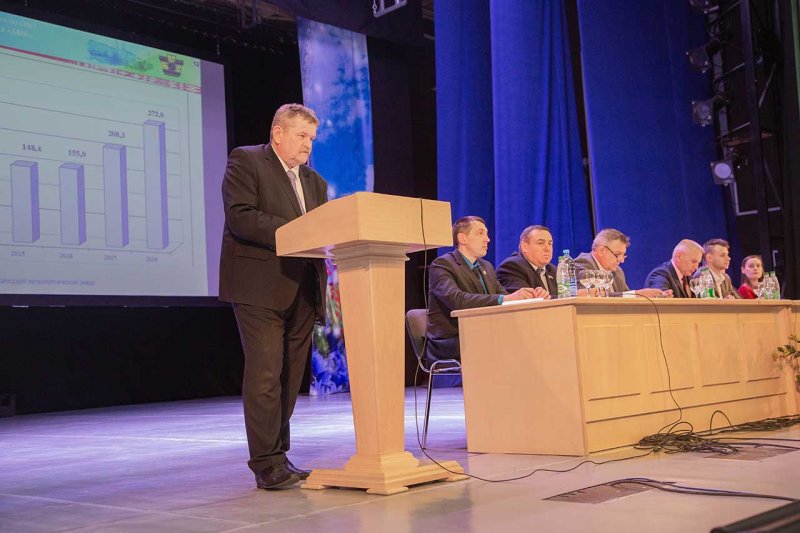 On March 29, a reporting conference of the primary trade union organization, which today unites more than 16 400 employees of the plant, its unitary enterprises and non-working pensioners, took place at OJSC “BMZ” - the management company of the “BMK” holding. At the large-scale forum, the results of the implementation of the measures of the collective agreement for 2018 were summed up, as well as some amendments to the current collective agreement for 2018 & dash; 2021.

Traditionally, the general director of the enterprise Anatoly Nikolaevich Savenok gave a detailed report on the results of BMZ's work in 2018 before the conference delegates. Having greeted the participants, the head noted that the past year was quite successful for the plant, which is clearly evidenced by the achieved economic indicators. Thus, BMZ managed to achieve a revenue of $ 1.5 billion (26% higher than the 2017 level), a sales profitability of 8.0% (higher than the 2017 level by 2 percent). In 2018, 2 million tons of metal products worth $ 1.26 billion were shipped to foreign consumers, new countries in Africa and Latin America appeared in the export geography.

& bsp; & bsp; - All our achievements and victories consist of the well-coordinated work of the entire team of many thousands, - A.N. Savenok. - For example, the economic effect from the implementation of measures to reduce costs is significant, which amounted to $ 118 million or more than 9% of the cost of production. The plant also worked efficiently in terms of energy consumption: it was reduced by 8.7 percent.

& bsp; & bsp; As the General Director noted in his speech, the achieved economic indicators allowed the plant to fulfill all social obligations to the team. First of all, to provide employees with a decent level of income. So, the average monthly accrued nominal wages at BMZ for 2018 amounted to 1,458.4 rubles. Its growth rate was almost 138 percent.

& bsp; & bsp; Speaking about the importance of BMZ for the region of presence, it is worth noting that in 2018 the plant paid income tax and to the social protection fund of the population over 93 million rubles.

& bsp; & bsp; - One of the best proofs of the effectiveness of our work is the staff turnover rate for 2018. It amounted to only 2.5%, which is the lowest figure in the last 5 years, the CEO summed up in his speech. - I thank all metallurgists for their dedication to the enterprise, their professionalism and hard work.

& bsp; & bsp; Then the floor was taken by the chairman of the trade union committee of BMZ Alexander Aleksandrovich Koleda. He informed the conference delegates about how the BMZ trade union committee worked on the implementation of the collective agreement in 2018. In his report, he described in detail the activities for each section of the collective agreement, noting that all its points were met, all legal guarantees were observed.

& bsp; & bsp; - Thanks to trade union dues for the reporting period, we were able to provide material assistance to factory workers in the amount of over 310 thousand rubles. More than 430 thousand rubles were spent on organizing cultural events. And these are just a few areas of our work. I am pleased to note that the plant trade union today unites like-minded people, and this union serves the common interests of the plant workers, allows you to do good deeds, support socially important initiatives and undertakings, - summed up his speech A.A. Koleda.

& bsp; & bsp; The conference was attended by the chairman of the Zhlobin regional executive committee I.A. Naumenko, deputy chairman of the Belarusian trade union of industrial workers "BELPROFMASH" V.V. Fedorov, chairman of the regional union of trade unions O.V. Kostenko. In their addresses, the honored guests noted the high importance of the enterprise for the republic and the region of presence, as well as its social orientation.

Сomments
Добавить комментарий
Комментарии (0)
On this topic
The results of innovative activities of OJSC “BMZ” - the management company of the “BMK” holding
A reporting trade union conference was held at BMZ.
How, where and for what can you buy wholesale cigarettes?
The CIS prize for achievements in the field of product and service quality was presented to BMZ.
Mechel announces that BMK has repaid all its obligations to the Federal Reserve Fund of the Russian
How to choose and where to buy good whiskey inexpensively?
News Analytics
Eurofer expects EU steel demand to fall 4.6% in 2022 and 1.6% in 202305-02-2023, 13:31
EU Green Deal should encourage investment in mild steel projects: Eurofer02-02-2023, 16:32
Belarusian steel plant to operate at full capacity from February02-02-2023, 16:56
British Steel considers cutting up to 1,200 jobs at Scunthorpe02-02-2023, 11:50
Electric vehicles will play a key role in US aluminum production growth - Norsk01-02-2023, 12:17
European stainless steel producers ready to raise prices31-01-2023, 16:16
S&P: Russia will continue to dominate the steel export market in the Black05-01-2023, 11:22
Fitch Analysts Predict Big Drop in Global Steel Consumption This Year14-12-2022, 13:59
Analysts predict 5% annual growth in the iron casting market through 203006-12-2022, 12:44
Commodity prices will fall, metals quotes will rise slightly - Focus Economics28-11-2022, 13:28
Sign in with: