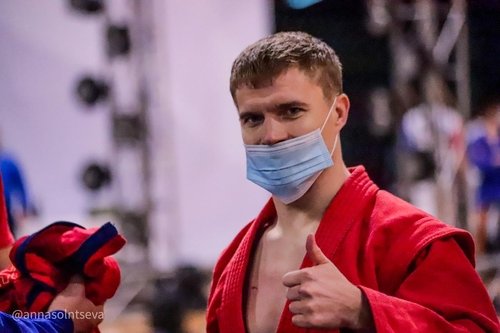 The athletes of the UMMC CS won the gold and bronze medals at the championships and World SAMBO Championships held from November 5 to 8 in Serbian Novi Sad.

Vladimir Gladkikh won gold in the under 57 kg category at his debut world championship.

And German Sorokin (up to 52 kg) won the bronze medal of the World Youth Championship.

As a silver medal winner of the Russian Gladkikh Championship was supposed to take part in the European Championship in Yekaterinburg, which was later canceled due to the coronavirus pandemic. However, fate decreed otherwise, and Vladimir got a chance to play in a tournament of a higher rank, after the first number of the national team, the champion of Russia-2020 Muscovite Sayan Hertek, was out of action. As a result, Gladkikh justified the confidence of the coaches by 100%. Having consistently dealt with his rivals in the preliminary stages, he also showed great experience and class in the final. Having tactically competently built a duel with Akmaliddin Karimov from Tajikistan, Gladkikh calmly and confidently kept a minimum advantage of 1: 0 up to the referee's victory whistle. noted on November 8.

In order to compete for the "gold", Sorokin did not have quite enough. The semifinal match with Iulian Arapan (Moldova) was full of mutual chances, but in the end the Moldovan athlete turned out to be stronger and snatched the victory with a score of 4; 2. Sorokin's disappointment knew no bounds. But he quickly managed to pull himself together and in the fight for the third place ahead of schedule defeated Dmitry Zhebchuk (Ukraine), having performed an effective painful hold.

- For Herman, this was the first international start. Therefore, I am sure that this is only his first step to great victories, ”Mikhail Sukhanov, coach of the UMMC CS, assessed the performance of the ward.

On this topic
Sambo wrestlers of the UMMC club became the owners of the Cup of Russia
The TMK Board of Directors recommends accepting the voluntary offer of the TMK subsidiary in
A new sambo section has opened at school No. 17 of Sukhoi Log
The best tennis players of Russia U11 have been identified in Verkhnyaya Pyshma
The UMMC Sambo Club was granted the right to host the European Sambo Championship 2020
European SAMBO Championships 2020 will be held in Yekaterinburg
Добавить комментарий
Комментарии (0)
News Analytics
US Provides $ 20 Billion in Government Support to Airlines to Pay Salaries02-12-2020, 19:25
Metinvest closes its first securitization deal02-12-2020, 19:05
Sanjiv Gupta one of these days will find out all the financial secrets of the02-12-2020, 19:18
EU asks Biden to abolish duties on steel and aluminum02-12-2020, 15:16
Mariupol plant named after Ilyich produced the first 20 thousand tons of02-12-2020, 15:54
European Union scrap collectors worried about possible export restrictions18-11-2020, 10:41
Occupational diseases of workers in the extractive industry: types and ways to16-11-2020, 17:49
Eurofer expects recovery in EU steel demand05-11-2020, 09:47
Hot rolled carbon steel demand will continue to grow by 4% pa until 203004-11-2020, 16:14
Platts Steel Trade Review: China Will Decide Asia's Fate30-10-2020, 10:04
Sign in with: