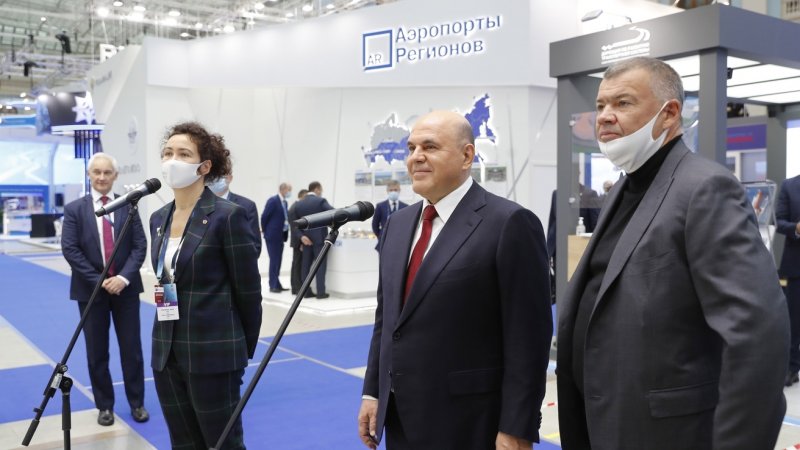 Russia's largest specialized stevedoring company with high-tech coal transshipment - Vostochny Port JSC - reports on the launch of the “Novy” railway fleet for loaded trains, built as part of the modernization of the port station Nakhodka-Vostochnaya of the Far Eastern Railway. The command to receive the first train with Kuzbass coal was given by the Prime Minister of Russia Mikhail Mishustin.

The ceremony dedicated to the landmark event took place on the territory of the Novy railway park and was televised on the big screen of the joint stand of the management company "UMMC", JSC "Vostochny Port" and JSC "Rosterminalugol" in the capital "Gostiny Dvor", where these days the XIV International Forum "Transport of Russia" is being held. On the stand screen, the launch and reception of the first loaded train with coal on the way of the new railway fleet was broadcast, followed by delivery for unloading to the specialized terminal of Vostochny Port JSC.

- Thank you very much! With all my heart I want to congratulate you on this event, on the completion of such large-scale works. And God forbid that everything works out! - the Prime Minister congratulated the port workers.

- JSC "Vostochny Port", a leading stevedoring company in Russia for using the best available technologies, and in the railway project embodied its basic principles important for the Far East: combining ecology, social responsibility and management to achieve high results of work, - said Irina Olkhovskaya, Director for Port and Railway Projects of UMMC.

The Novy railway park is the most modern in the Far East and was built using all the latest technical solutions. All train and shunting work is carried out on 12 electrified receiving railway tracks with a total length of 19 km. The turnouts and signals of the park are equipped with microprocessor centralization and are controlled from a single post. All of them are equipped with electric heating for uninterrupted operation during negative temperatures. A unique feature is the introduction of a new technology that automatically recognizes the plates of all types of freight cars at speeds up to 60 km /h. Thanks to the Novy Park, an additional 100 skilled jobs will be created in the state of Vostochny Port JSC.

The Novy Park commissioning marks the completion of the modernization of the “last mile” of the Trans-Siberian Railway - the port station Nakhodka-Vostochnaya - one of the most important nodes of the railway infrastructure of the Russian Far East. In the course of modernization in 2019, Vostochny Port JSC built the B railway park at the station. Five electrified railway tracks with a total length of 7.3 km were donated to the balance sheet of Russian Railways for general use by all companies in the industrial cluster of the Wrangel Bay. The total investment in the construction of parks amounted to 5 billion rubles.

The project for the construction of railway parks was implemented by a private investor Vostochny Port JSC on the principles of public-private partnership with Russian Railways within the framework of the target areas of the Russian Transport Strategy under the auspices of Ministry of Transport of the Russian Federation. The new railway infrastructure in the Far East will make it possible to fully load the new capacities of the largest Russian specialized coal terminal of Vostochny Port JSC up to 55 million tons per year, as well as to solve the problem of bottlenecks on the Far East railway by increasing the capacity of the Nakhodka-Vostochnaya station by 25 million tons and optimization of rolling stock handling technology.

The construction of new facilities at the station connects federal and international programs implemented by the state and private business to increase the throughput capacity of the Eastern range of Russian Railways and the construction of new seaports in eastern Russia with the purpose of fulfilling the instructions of the President of the Russian Federation on the development of transport infrastructure and increasing the country's export potential.

The enterprise is equipped with the best modern equipment for high-tech coal transshipment, in particular, covered wagon defrosters and wagon dumpers, stackers, reclaimers, covered conveyor lines and transfer stations, as well as shiploaders.

Vostochny Port JSC is the first coal port in the Far East, certified in accordance with

On this topic
UMMC took part in the international congress "Forum 100+" in Yekaterinburg
Gaiskiy GOK has started construction of a mine shaft on East Podolsk Deposit
MMK will present its project "Attraction" at the investment forum
Made in Russia: UMMC presented a new mine machine, fire-resistant cables and digital technologies
Made in Russia: UMMC will present a new mine machine, fire-resistant cables and digital
The 10th Northern Dimension Forum has ended in St. Petersburg
Добавить комментарий
Комментарии (0)
News Analytics
Scientists have created artificial leather made of metals capable of29-11-2020, 10:01
The State Environmental Inspection will not allow disrupting the terms of29-11-2020, 10:17
All vessels involved in the construction of Nord Stream-2 returned to the port28-11-2020, 16:43
IMF denies emergency financial aid to Kiev28-11-2020, 10:31
Biden's Production Plan Requires Significant Increase in U.S. Mineral Production28-11-2020, 10:35
European Union scrap collectors worried about possible export restrictions18-11-2020, 10:41
Occupational diseases of workers in the extractive industry: types and ways to16-11-2020, 17:49
Eurofer expects recovery in EU steel demand05-11-2020, 09:47
Hot rolled carbon steel demand will continue to grow by 4% pa until 203004-11-2020, 16:14
Platts Steel Trade Review: China Will Decide Asia's Fate30-10-2020, 10:04
Sign in with: