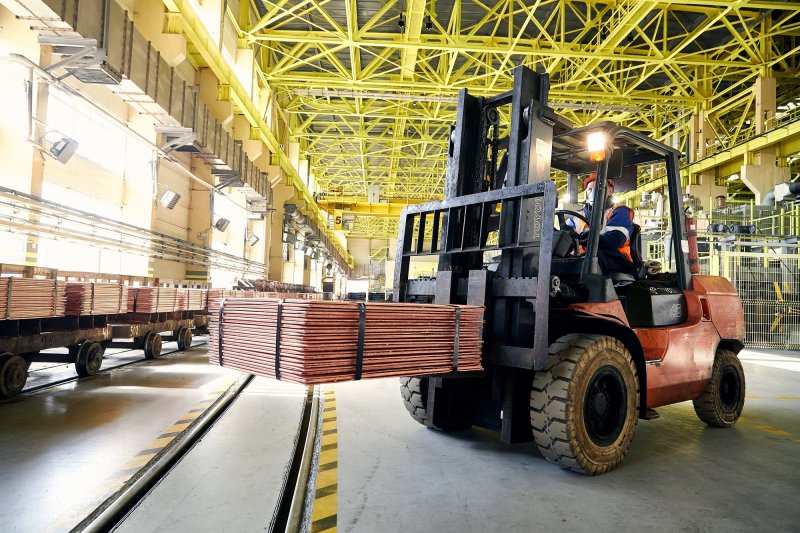 Uralelectromed JSC made a worthy contribution to the overall collection of initiatives for the operational transformation of UMMC in 2020. The company has implemented 12 measures with a total economic effect of 81 million rubles.

Last year, Uralelectromed JSC produced a record 432 thousand tons of copper. The high result was achieved largely due to initiatives aimed at obtaining significant economic benefits. Thus, in the electrolysis workshop, the intensity of copper deposition on cathodes was increased, the current strength in electrical circuits was increased, the operation of technological machines and cranes was changed, a reserve of permanent cathodes was formed on the racks in each aisle in order to reduce the waiting time for baths loading. The economic effect of these measures amounted to 36 million rubles.

On the territory of the main industrial site in Verkhnyaya Pyshma, a new scheme for the distribution of sulfuric acid was applied. Specialists of the design work department (PMD) suggested replacing the "beam" pipe interconnection scheme with a redundant collector one.

- Previously, sulfuric acid was supplied to the shops through seven pipelines about 2 km long. Now the acid is dispensed through two interchangeable collectors, - said Anton Timoshenko, deputy head of the UPR. - As a result, it was possible to reduce the length of pipelines by more than 2 times, to reduce the cost of additional shut-off valves, automation elements and reinforcement of overpasses, as well as to improve operational safety. The economic effect of the initiative will amount to 6.7 million rubles per year.

In addition, Uralelectromed JSC ranked telephone sets for digital and analogue communications. Most of the telephones installed in workshops and departments are now connected to an analog signal, which allowed the company to save 5.3 million rubles in six months, improve the reliability of repeaters and the signal identification system, while the quality of communication remained at a high level.

In the branch "Production of polymetals" (Kirovgrad) in the metallurgical shop, the initiative group proposed to process part of the slag immediately in converters, bypassing the stage of mine smelting. This led to a decrease in the costs of slag processing, an increase in the output of copper and precious metals into blister copper, and it became possible to additionally involve raw materials in mine smelting. If the branch processes 2500 tons of anode slag per year in converters, the economic effect will amount to 19.7 million rubles.

Note that 719 people took part in the implementation of 12 initiatives, the total bonus fund amounted to 5.2 million rubles.

On this topic
JSC "Uralelectromed" has mastered the effective method of cleaning electrolysis baths
The foundation of the third stage of the copper electrolysis workshop of Uralelectromed JSC is 75%
JSC "Uralelectromed" has built the foundation and frame of a new warehouse for sulfuric acid
Outotec to supply process machines to the third stage of the copper electrolysis plant
Construction of a new sulfuric acid warehouse has begun at Uralelectromed
The eternal flame from the factory furnace, Victory Waltz, Procession of military equipment and a
Добавить комментарий
Комментарии (0)
News Analytics
Gas prices in Ukraine have reached a record value over the past two years -16-04-2021, 17:24
Ukrmetallurgprom asks the Antimonopoly Committee to allow Metinvest to bid for16-04-2021, 17:23
A fatal accident occurred on the territory of the Dnieper Metallurgical Plant16-04-2021, 13:01
Cars built for Euro 2012 will be repaired at the Kryukov Carriage Works16-04-2021, 12:46
Novokramatorsk Machine-Building Plant has raised wages for the second time16-04-2021, 12:54
World Steel Association predicts a good year for metallurgists15-04-2021, 18:19
World Steel Association defines green steel and its variations12-04-2021, 13:14
China unlikely to cut steel capacity in 2021 due to high steel prices07-04-2021, 12:11
Scrap metal market at the beginning of April02-04-2021, 11:10
Rising Chinese Prices Fueled Rising Global Steel Prices - MEPS25-03-2021, 18:54
Sign in with: