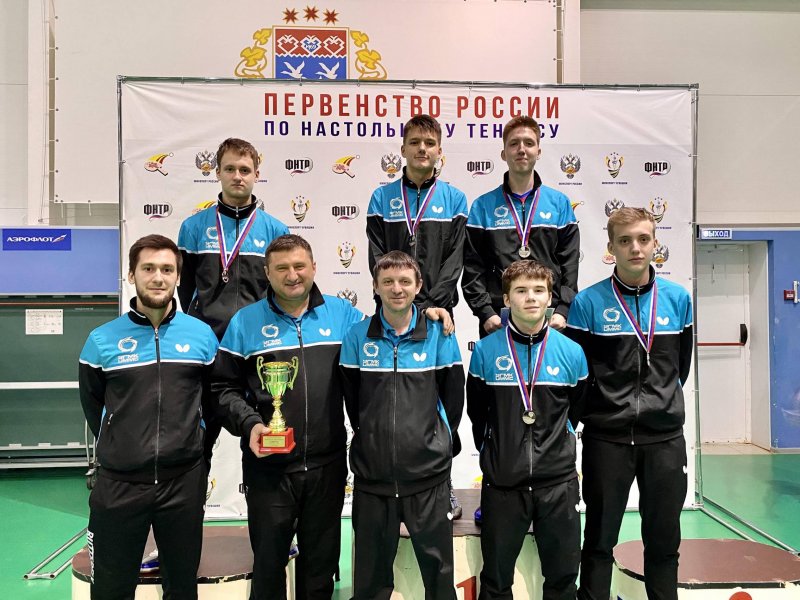 Tennis players of the UMMC as part of the Sverdlovsk region national team became silver medalists of the Russian championship among athletes under 19, which is held in Cheboksary from March 23 to 28.

The medals were won by Maxim Kaburkin, Semyon Shevnin, Ilya Konyukhov, Mikhail Rozhkov and Dmitry Susmetov, as well as the coach of the team Stanislav Zlobin.

Our tennis players, seeded number two, lost only to the Moscow team, which was in the lead in the ranking even before the tournament began. In the decisive match, the UMMC athletes fought with all their might, but they were able to win only in one meeting: Maxim Kaburkin defeated Ilya Anokhin. Semyon Shevnin in the match against Vladislav Makarov could also have earned a point, but in the fifth game his opponent was slightly stronger. Ilya Konyukhov also had a chance to win. He bounced back from the score 0: 2 in games, but he was just a little short of the decisive segment.

In the meeting between Kaburkin and Makarov, the Moscow tennis player was again stronger - 3: 1 in the meeting and at the end of the whole match .

The girls of the Sverdlovsk region team took the fifth place, under which they began their performance at the tournament. In the struggle for this line, they beat the Krasnodar Territory team with a score of 3: 2.

On March 25, a personal tournament started in Cheboksary. UMMC is represented by 18 athletes at once. The winners of the tournament will be determined on Sunday, March 28th.

On this topic
Basketball club UMMC became the first owner of the new Russian Cup
Vladimir Gladkikh from UMMC Sambo Club - World Champion
All-Russian table tennis competition "Step into the future" started in the Sverdlovsk region
The best tennis players of Russia U11 have been identified in Verkhnyaya Pyshma
The best young tennis players of the country came to Verkhnyaya Pyshma
Basketball club UMMC became a five-time Euroleague champion
Добавить комментарий
Комментарии (0)
News Analytics
The capacity of the domestic steel market in Ukraine in January-March decreased19-04-2021, 10:33
In Russia, there is an exuberant demand for agricultural machinery19-04-2021, 10:24
Iran is satisfied with the reaction of the world community to 60% enrichment of18-04-2021, 13:24
Gas prices in Ukraine have reached a record value over the past two years -16-04-2021, 17:24
Ukrmetallurgprom asks the Antimonopoly Committee to allow Metinvest to bid for16-04-2021, 17:23
World Steel Association predicts a good year for metallurgists15-04-2021, 18:19
World Steel Association defines green steel and its variations12-04-2021, 13:14
China unlikely to cut steel capacity in 2021 due to high steel prices07-04-2021, 12:11
Scrap metal market at the beginning of April02-04-2021, 11:10
Rising Chinese Prices Fueled Rising Global Steel Prices - MEPS25-03-2021, 18:54
Sign in with: