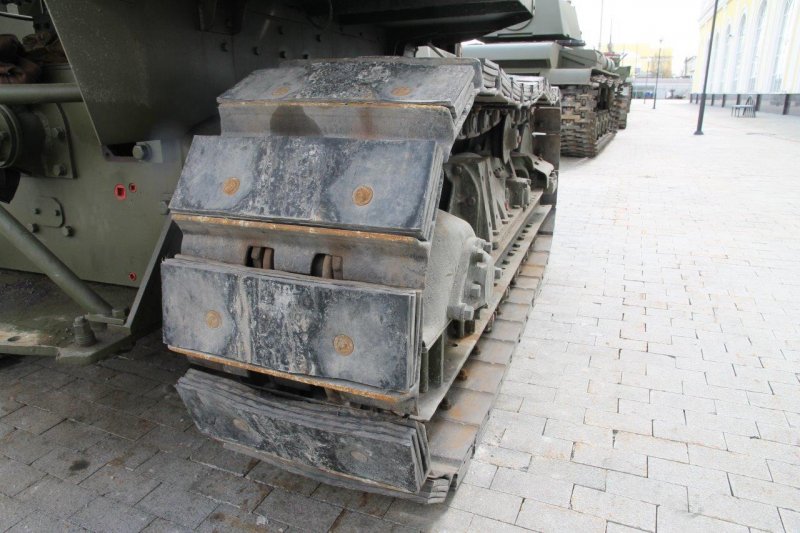 Special asphalt shoes were put on the tracks of heavy combat vehicles from the UMMC museum complex. They will preserve the road surface of the streets of Verkhnyaya Pyshma, where on the Victory Day, May 9, a traditional festive procession will take place with the participation of running historical exhibits.

“The procedure was first of all heavy vehicles ...… .. They welded on caterpillar tracks special overlays. They reduce specific loads on the ground and eliminate the destruction of asphalt. A precaution is not superfluous - the weight of individual self-propelled guns reaches several tens of tons, and by May 9, military equipment will enter the city twice more - on May 3 and 7. " - says Alexander Viktorov, senior mechanical technician of the technical department of maintenance and restoration of equipment of the UMMC museum complex.

On May 3, the first joint rehearsal of the festive procession of the walking and mechanized columns will take place. The mechanized convoy will include 39 rare armored vehicles, self-propelled and trailed artillery guns, tractors, motorcycles and tanks. Among them are the legendary T-34 tanks, the five-turret T-35 tank and the SU-100 self-propelled tank destroyer created at Uralmashzavod. For the first time, heavy tanks IS-3 and KV-1, as well as a ZIS-6 truck with a sound station in the back, will take part in the march.

This year, mostly veterans of the armed forces, participants local conflicts. One of the tanks is controlled by the guard foreman of the reserve Vyacheslav Polezhaev, a tankman and grandson of a tankman, hero of the Soviet Union Nikolai Polezhaev. He received the "Gold Star" for his selfless actions while crossing the Warta River by a tank corps. Nikolai Polezhaev was a participant in the Victory Parade on June 24, 1945. The hero's grandson was indescribably delighted when he learned that he was assigned to the T-34 tank.

“I was amazed! This is destiny! My grandfather fought in the T-34. I could not even dream that I would sit in the same tank. Already after the first drive I appreciated how much effort our grandfathers had to exert to operate these machines. Three hundred kilometers to walk on mechanics - it's not on hydraulics, where the lever is turned, and the car starts spinning by itself! The old people said - the gear lever had to be shifted together! They were strong people! " - says the participant of the procession, the driver-mechanic of the T-34 Vyacheslav Polezhaev.

The mechanized column is formed from the exhibits of the exhibition center "Parade crew" of the UMMC museum complex. This year, the organizers of the march will acquaint residents and guests of the Copper Capital of the Urals with the history of Soviet parades - from the pre-war ones to the famous Allied parade that took place in Berlin in September 1945. For this, military equipment was divided into groups according to the chronology of events. A separate group will pass combat vehicles supplied by the allies of the USSR under the Lend-Lease program. Among them are the Sherman tank, the Willis and the Studebaker cars.

The foot column will include drummers from the Yekaterinburg Suvorov School, cadets and youth soldiers from Verkhnyaya Pyshma, as well as ceremonial crews of the Central Military District and the National Guard. The total number of participants in the festive procession is almost one and a half thousand people. On May 7, a dress rehearsal of the festive procession will take place. On the ground, the coherence of their actions will be checked by the calculations of the foot and mechanized columns, and in the sky over Verkhnyaya Pyshma, the passage of the parade line will be worked out by the crews of planes and helicopters of the Central Military District.