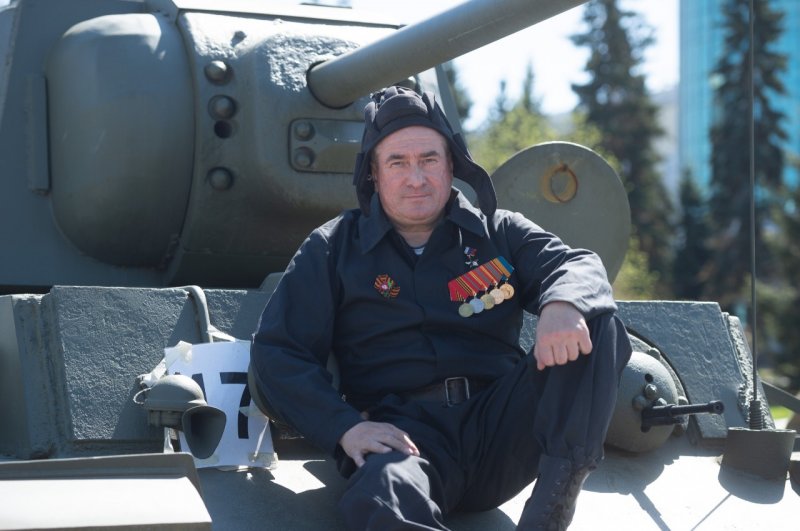 Heroes of Russia Roman Shadrin and Oleg Kaskov took part in the dress rehearsal of the solemn procession dedicated to Victory Day. They took the places of the commanders of the crews of the rare T-28 and KV-1 tanks. Behind the levers of combat vehicles, which will march on May 9 in a solemn march along the main street of Verkhnyaya Pyshma, are mainly veterans of the armed forces, participants in local conflicts.

“This is great! It's one thing to stand on the podium as a spectator, it's another to be a direct participant. I ride a T-28 tank as a crew member. This machine took part in hostilities. For me, the son and grandson of front-line soldiers, a person who has gone through more than one war, it is very important to touch history like this. It’s such a drive when you feel involved! I think that all the veterans who participate in this march are at least five years younger today! ”Says Hero of Russia Roman Shadrin.

This year the festive mechanized column has become even larger. It consists of 39 units of rare armored vehicles, self-propelled and trailed artillery pieces, tractors, motorcycles and tanks. Among them are the legendary T-34 tanks, the five-turret T-35 tank and the SU-100 self-propelled tank destroyer created at Uralmashzavod. For the first time, heavy tanks IS-3 and KV-1, as well as a ZIS-6 truck with a sound station in the back will take part in the procession.

The mechanized column is formed from the exhibits of the exhibition center" Parade crew "of the UMMC museum complex. This year, the organizers of the march will acquaint residents and guests of the Copper Capital of the Urals with the history of Soviet parades - from the pre-war ones to the famous Allied parade, which took place in Berlin in September 1945. For this, military equipment was divided into groups according to the chronology of events. A separate group will pass combat vehicles supplied by the USSR allies under the Lend-Lease program. Among them are the Sherman tank, the Willis and the Studebaker cars.

It is expected that Hero of Russia Damir Yusupov will take part in the festive procession in Verkhnyaya Pyshma. The most famous civil aviation pilot could not take part in today's rehearsal - he is on a flight. Damir Yusupov has been assigned a commanding place in the crew of the IS-3 heavy tank.

The total number of participants in the festive procession is almost one and a half thousand people. The pedestrian column will include cadets and junior soldiers of Verkhnyaya Pyshma, drummers of the Yekaterinburg Suvorov school, veterans of local conflicts, as well as ceremonial crews of the Central Military District and the Russian Guard.

Финансовая аналитика, прогнозы цен на сталь, железную руду, уголь и другие сырьевые товары. More news and analytics on Metallurgprom telegram channel - subscribe to get up-to-date market information and price forecasts faster than others.
Сomments
Добавить комментарий
Комментарии (0)
On this topic
Minute of silence, Fate of a soldier, procession of historical military equipment, planes in the
The eternal flame from the factory furnace, Victory Waltz, Procession of military equipment and a
Rare tanks and self-propelled guns got shoes before entering the city
"There is no such thing anywhere!": A rehearsal of a unique festive procession dedicated
May 9 in Verkhnyaya Pyshma: Eternal flame from the factory oven, Victory Waltz, Procession of
In Verkhnyaya Pyshma held a rehearsal of the solemn March of military equipment since the great
News Analytics
ArcelorMittal launches flagship carbon capture and recycling project in Belgium08-12-2022, 14:59
The South Korean government "ordered" the striking truckers to return08-12-2022, 11:04
India expands RoDTEP export incentive scheme to steel and iron08-12-2022, 10:28
Volkswagen Anhui's first pre-production NEV rolled off the assembly line08-12-2022, 10:17
Chinese steel exports up 28.2% - customs data07-12-2022, 23:43
Analysts predict 5% annual growth in the iron casting market through 203006-12-2022, 12:44
Commodity prices will fall, metals quotes will rise slightly - Focus Economics28-11-2022, 13:28
Platinum market to face shortage next year - WPIC22-11-2022, 18:25
Global steel demand falls and will fall by 2.3% in 2022: WorldSteel19-10-2022, 23:12
Iron ore prices fall to 11-month low15-10-2022, 10:36
Sign in with: