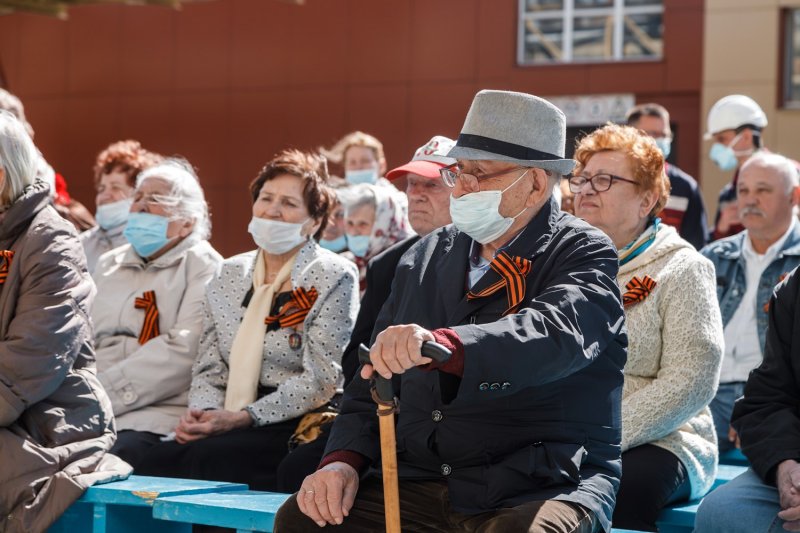 A festive marathon dedicated to the 76th anniversary of Victory in the Great Patriotic War has started at Uralelectromed JSC (an enterprise of the UMMC metallurgical complex). A delegation of veterans of the enterprise and home front workers visited two open-air concert venues organized on the territory of the plant.

Opening the event, Dmitry Galenkovsky, HR Director of Uralelectromed JSC, thanked the veterans for their selfless work during the war and post-war time and congratulated on the upcoming holiday. He emphasized the significant contribution of the Pyshminsky Copper Electrolyte Plant to the Victory - during the war years, about 80% of shell cases and cartridges were made from copper of the Pyshminsky Copper Electrolyte Plant. 667 factory workers went to the front, 250 people did not return, their names are carved on the granite of the Cranes memorial.

At the first concert "station" near the copper electrolysis workshop, participants of the Bravo theater studio of the Verkhny Pyshmin House of Children's Art performed in front of the distinguished guests under the leadership of Natalia Reznikova and Anna Sazhaeva. Together with young employees of Uralelectromed JSC, they presented the Front Triangles program: they read letters from factory workers who went to the front, sang military songs and performed stage compositions.

Creative teams performed at the second "station" near the vitriol shop Palace of Culture "Metallurg", in their speeches focused on the happiness of a peaceful life and the value of the Great Victory.

At the end of the concert, the veterans took part in the All-Russian action "Dove of Peace". They fixed paper birds on a blue canvas as a token of gratitude to the heroes of the war for their unparalleled feat in the name of humanity.

The culmination of the relay concert was the solemn laying of flowers at the memorial plaques erected in memory of the TsEM master Vasily Antonovich Danilchenko, who died on the battlefields, and the director Vladimir Aleksandrovich Khrenov, who led the enterprise during the war years.

Финансовая аналитика, прогнозы цен на сталь, железную руду, уголь и другие сырьевые товары. More news and analytics on Metallurgprom telegram channel - subscribe to get up-to-date market information and price forecasts faster than others.
Сomments
Добавить комментарий
Комментарии (0)
On this topic
Mandrivnik Spodin Igor
Minute of silence, Fate of a soldier, procession of historical military equipment, planes in the
CMP Museum under the open sky filled with new exhibits
ChMK open-air museum celebrates its anniversary
The candle of memory. The employees of JSC "Uralelektromed" has honored the memory of
Main day: BMZ celebrated Metallurgist Day
News Analytics
China's iron ore output to rise in 2023 as new projects are launched30-11-2022, 18:10
"Centravis" agreed to supply a new batch of seamless pipes to a30-11-2022, 16:51
Metinvest enterprises in Ukraine resumed work after massive shelling of29-11-2022, 11:59
The European Council added the violation of restrictive measures (sanctions) to28-11-2022, 14:22
The abolition of export duty in India may reduce the price of Turkish steel28-11-2022, 14:07
Commodity prices will fall, metals quotes will rise slightly - Focus Economics28-11-2022, 13:28
Platinum market to face shortage next year - WPIC22-11-2022, 18:25
Global steel demand falls and will fall by 2.3% in 2022: WorldSteel19-10-2022, 23:12
Iron ore prices fall to 11-month low15-10-2022, 10:36
China production cuts in winter will give limited boost to steel markets -15-09-2022, 10:09
Sign in with: