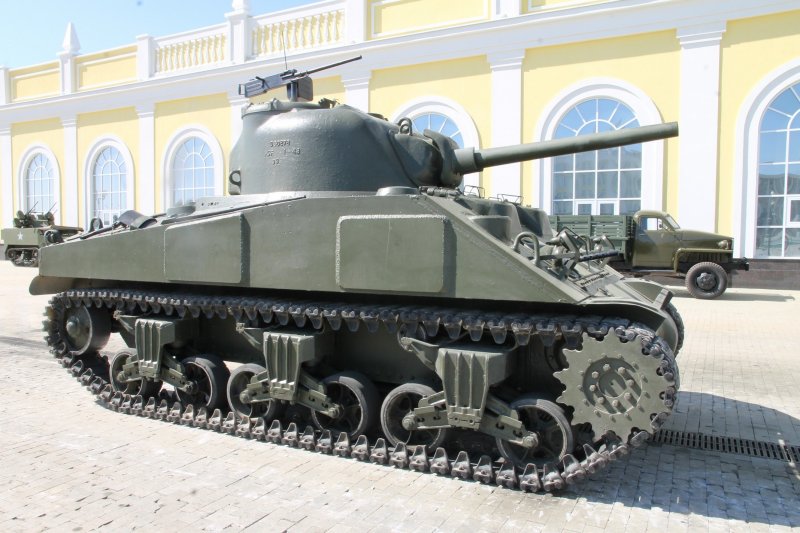 Since May 15, the "Parade Roster" exhibition center, which displays running samples of military equipment from the 1930s-1940s, is re-opening its doors to visitors. For almost two months, the exhibition center was closed to visitors: the exhibits were undergoing maintenance, and after that most of them were involved in the festive procession dedicated to Victory Day. Now tanks, cars and self-propelled guns are returning to their places according to the places in the parade crews.

Thematically, the exposition is divided into two parts. The first one shows the equipment that participated in the November 1941 parade and the pre-war parades, and the second - the equipment of the Victory parade on June 24, 1945

The renewed exposition will include a representative of another parade - the Berlin one: September 7, 1945 of the country - Allies in the anti-Hitler coalition led their troops across the capital of defeated Nazi Germany. Then for the first time the Soviet Union demonstrated a new heavy tank IS-3. The IS-3 appeared in Verkhnyaya Pyshma two months ago and has already managed to take part in the festive procession. Hero of Russia Damir Yusupov was in the commanding place of the tank, marching in the parade line.

The main exposition is preceded by a photo exhibition - 98 photographs from the Great Patriotic War embody all the experiences associated with the war. The first photo shows Muscovites listening to the radio address of the Soviet Government about the beginning of the war. The last one shows the faces of the participants in the June 1945 Victory Parade.

“The exhibition gives the necessary emotional mood: war is not so much a technique that we see in parades, war is, first of all, people! Those in the rear, children, adults, partisans, soldiers, officers - the entire Soviet people! ”Says the head of the exposition department of the museum complex Vadim Vagin.

Almost 60 samples of military equipment are presented in the "Parade Crew": trucks, armored vehicles, the world's only serial five-tower tank T-35, heavy tank KV-1 , self-propelled guns SU-76, ISU-152, as well as various samples of wheeled vehicles, artillery. The creators of the exposition set themselves the goal of immersing the visitor as much as possible in the atmosphere of the parade, so that he could feel like a participant in the event. The projection of the ceremonial newsreel is complemented by the sounds of running engines. The floor in the building is paved with paving stones, similar to the one on Red Square, and in the air you can smell the smell of gasoline and diesel fuel - the "aroma" of running exhibits.

Финансовая аналитика, прогнозы цен на сталь, железную руду, уголь и другие сырьевые товары. More news and analytics on Metallurgprom telegram channel - subscribe to get up-to-date market information and price forecasts faster than others.
Сomments
Добавить комментарий
Комментарии (0)
On this topic
One of the best children's tennis tournaments in the country "UMMC-Open" has started in
Magnitogorsk Iron and Steel Works became a member of the international project "Engineers of
NLMK Group intranet recognized as one of the best in the world
TMK took part in Steel Safety Day-2019
The ChMK team will represent Chelyabinsk in the final of the Ural "Battle of the
"Severstal" together with the Fund "SKOLKOVO" 11 Mar held Open Day accelerator
News Analytics
China's iron ore output to rise in 2023 as new projects are launched30-11-2022, 18:10
"Centravis" agreed to supply a new batch of seamless pipes to a30-11-2022, 16:51
Metinvest enterprises in Ukraine resumed work after massive shelling of29-11-2022, 11:59
The European Council added the violation of restrictive measures (sanctions) to28-11-2022, 14:22
The abolition of export duty in India may reduce the price of Turkish steel28-11-2022, 14:07
Commodity prices will fall, metals quotes will rise slightly - Focus Economics28-11-2022, 13:28
Platinum market to face shortage next year - WPIC22-11-2022, 18:25
Global steel demand falls and will fall by 2.3% in 2022: WorldSteel19-10-2022, 23:12
Iron ore prices fall to 11-month low15-10-2022, 10:36
China production cuts in winter will give limited boost to steel markets -15-09-2022, 10:09
Sign in with: