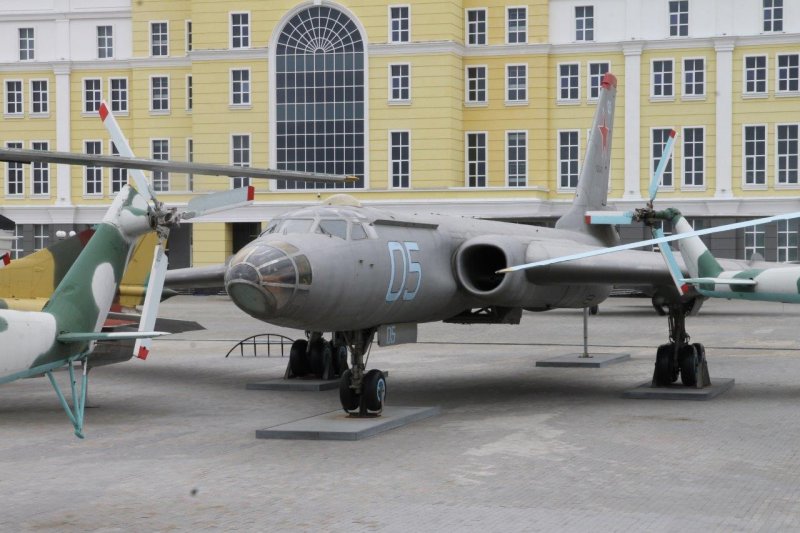 The new disassembled exhibit was delivered to the exhibition area on seven road trawls. The first Soviet strategic jet bomber M-4 was created in 1954. At that time, it was one of the largest aircraft in the world. It is 47.6 meters long and has a wingspan of over 50 meters. In height, this gigantic machine is only slightly lower than a five-story building. In the post-war years, leading design bureaus joined in the competition to create a new intercontinental bomber capable of delivering a nuclear charge to enemy territory in the shortest possible time. In the USA, the design of the B-52 and YB-60 was carried out, and in the USSR, instead of the outdated piston Tu-4, the turboprop Tu-95 and the subsonic jet M-4 were also created on a competitive basis. In the competitive struggle between the Soviet design bureaus of Myasishchev and Tupolev, friendship won - both aircraft went into production. Since 1954, only 34 M-4 aircraft have been produced. In the Armed Forces of the USSR, they were used until 1993 as fuel tankers. One of them is now being assembled in Verkhnyaya Pyshma.

“M-4 is a unique plane! Already received the central part of the fuselage and wing roots. We unload it and collect it in the very place where we plan to exhibit - opposite the Wings of Victory aviation museum. Now it does not look very good, without wings and a tail, but believe me: in the near future we will put it on display, and the plane will take its rightful place in our collection, ”says Victor Sevostyanov, director of the UMMC Museum Center. NATO, like Bison, will stand next to another Soviet jet aircraft, the Tu-16 LL, nicknamed the Badger in the North Atlantic alliance. This is a later multi-purpose vehicle. It appeared in the open area of ​​the UMMC museum complex several years ago. It was also decided not to hide the assembly of the new exhibit from the visitors. This interesting and laborious process can be observed for several weeks. The M-4 is already the seventh jet aircraft in the collection of the UMMC museum complex. The MiG-31 fighter-interceptor and the SU-24M front-line bomber, which appeared earlier, are only slightly inferior to it in size. It is planned to create a separate exhibition area for jet vehicles in the near future.

Финансовая аналитика, прогнозы цен на сталь, железную руду, уголь и другие сырьевые товары. More news and analytics on Metallurgprom telegram channel - subscribe to get up-to-date market information and price forecasts faster than others.
Сomments
Добавить комментарий
Комментарии (0)
On this topic
One of the best children's tennis tournaments in the country "UMMC-Open" has started in
UMMC-Developer and World Class become partners
SinTZ was visited by delegations of Japanese companies JFE Steel Corporation and Metal One
Regional aircraft L-410 celebrates its 50th anniversary
Services of the studio of design of premises "HATA DESIGN"
Electric cars in Dnipro
News Analytics
European steel price rise that began in January will be short-lived - MEPS26-01-2023, 14:44
Steel production in China rose in the first decade of January26-01-2023, 12:30
UK is ready to give 300 million pounds to save British Steel20-01-2023, 21:31
Carriage building plant in Kremenchug stopped production due to debts20-01-2023, 21:11
Europe's passenger car market records its worst year since the turn of the20-01-2023, 21:03
S&P: Russia will continue to dominate the steel export market in the Black05-01-2023, 11:22
Fitch Analysts Predict Big Drop in Global Steel Consumption This Year14-12-2022, 13:59
Analysts predict 5% annual growth in the iron casting market through 203006-12-2022, 12:44
Commodity prices will fall, metals quotes will rise slightly - Focus Economics28-11-2022, 13:28
Platinum market to face shortage next year - WPIC22-11-2022, 18:25
Sign in with: