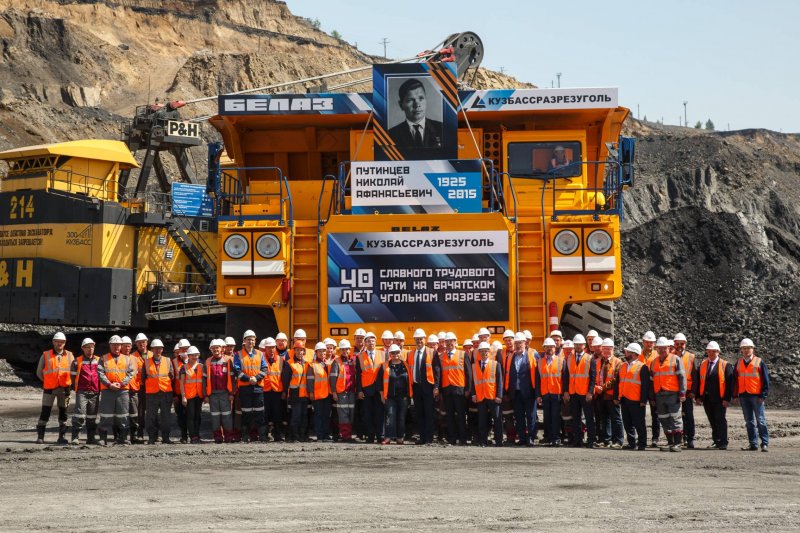 At the Bachatsky coal mine of JSC "MC" Kuzbassrazrezugol "(an enterprise of the raw materials complex of UMMC), the first in the company named BelAZ was solemnly put into operation. The new dump truck with a carrying capacity of 220 tons was named after the famous Kuzbass miner, Hero of Socialist Labor and veteran of the Great Patriotic War Nikolai Afanasyevich Putintsev.

“I would like to thank the BELAZ plant for creating such a wonderful tradition,” she said in her speech Director of JSC "MC" Kuzbassrazrezugol "Elena Drobina. “I wish the crew of our new quarry ship safe and productive sailing, proudly bear the name of a hero and never let him down.”

Nikolai Putintsev, a veteran of the Great Patriotic War, a foreman of a renowned excavator brigade, worked at Bachatskoe for over forty years section. The excavator brigade headed by him was the initiator of the initiative "Each slaughter, machine, mechanism - a high load." At the end of the 50s, Putintsev's brigade took on increased obligations and processed 1.4 million cubic meters of rock mass in a year, this record marked the beginning of the movement of “millionaire” brigades in Kuzbass.

The team will operate the dump truck. Vyacheslav Kushvid is one of the best in the open pit.

“For many years we have been supplying the most powerful mining dump trucks to people with the most powerful character who devote themselves to hard, difficult and at the same time amazing work,” the General Director of OJSC BELAZ addressed the audience Sergey Nikiforovich. “It is a great honor and double responsibility to give our car the name of a renowned Kuzbass miner, it is a great honor and double responsibility for us, equipment with such a name is simply obliged to work one hundred percent." Great names of the BELAZ equipment, initiated by the BELAZ plant, and opened a series of events dedicated to the 300th anniversary of Kuzbass.