On the Day of Memory and Grief, workers and veterans of Uralelectromed JSC laid flowers at the Cranes memorial 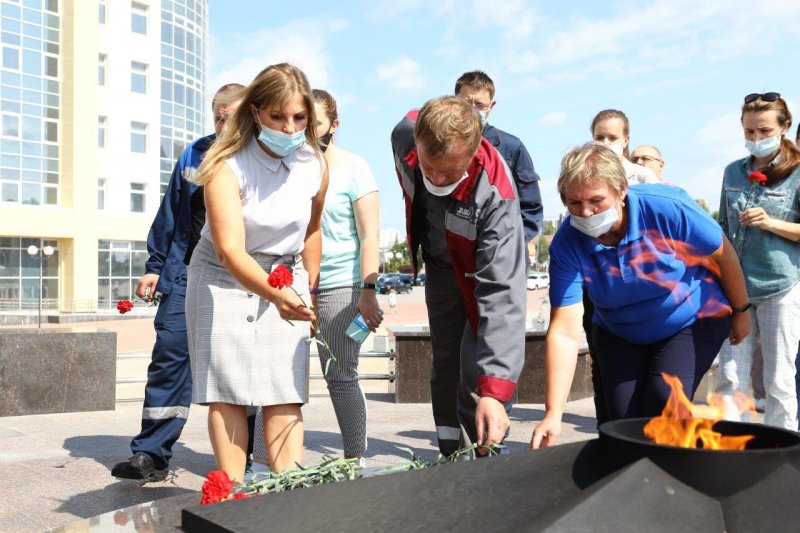 On June 22, at exactly four in the morning, representatives of the youth organization Uralelektromed JSC (an enterprise of the UMMC metallurgical complex) at the Cranes memorial laid out the number "80" out of lighted candles, symbolizing day of the beginning of the Great Patriotic War. Thus, the young employees of the enterprise supported the All-Russian campaign "Candle of Memory" and paid tribute to the heroes-front-line soldiers and their unparalleled feat.

The factory workers began their working day with the laying of flowers at the "Sleeve" sign, erected in honor of the workers of the Pyshminsky Copper Electrolyte Plant, who forged Victory in the rear. Following them, the veterans of the enterprise repeated the laying ceremony.

At 11 o'clock, the memorial action at the Cranes memorial continued. Director for General Affairs Miroslav Medvedev and Director for HR Dmitry Galenkovsky handed documents about the fate of three fighters of the Great Patriotic War to their relatives: Galina Aniskina, Nina Gudkova, Natalia Vasina, Nadezhda Semenkova and Nikolai Khlebnikov.

Fyodor Andriyanovich Bokov was 27 years old when in 1941 he went to the front, in November 1943 he disappeared without a trace. In the course of archival work, it was possible to establish that the commander of a company of anti-tank rifles of the 573rd rifle regiment of the 195th rifle division, senior lieutenant Fyodor Bokov, died heroically during the Dnepropetrovsk offensive operation. The Red Army soldier was buried in a mass grave in Ukraine, in the village of Petrovo, Dnepropetrovsk region.

Communication with Georgy Kuzmich Gudkov was cut off in June 1942. The search engines managed to trace his path. Machine gunner of the 3rd separate rifle battalion of the 37th separate rifle brigade Georgy Gudkov died on June 30, 1942 during defensive battles on the North-Western Front. He was buried in a mass grave in the village of Novoselye, Luga District, Leningrad Region.

24-year-old Viktor Ivanovich Khlebnikov, who went to the front in March 1942, wrote to his wife and three children that he was awarded the medal "For Courage". In April 1945, the squad leader of the 76th separate assault engineer-sapper battalion of the 16th assault engineer-sapper brigade of the RGK (1st Ukrainian Front), Sergeant Khlebnikov, disappeared carrying news. The bullet overtook him in Berlin. He was buried near the city of Barut.

Those gathered honored the heroic deed of the soldiers with a minute of silence and laid flowers at the Eternal Flame. At the end, the pupils of the city's schools released white balls into the sky - a symbol of peace and eternal memory.

On the same day, the UMMC Technical University hosted a regular meeting of the “Open Chair” (an educational project for representatives of the youth organization and veterans of JSC “Uralelectromed”). The participants discussed the events of 80 years ago and how the outbreak of the war affected the operation of the plant and the lives of the townspeople.