"This is the future of the city": leading experts and citizens discussed the new concept of the "Yekaterinburg-City" project 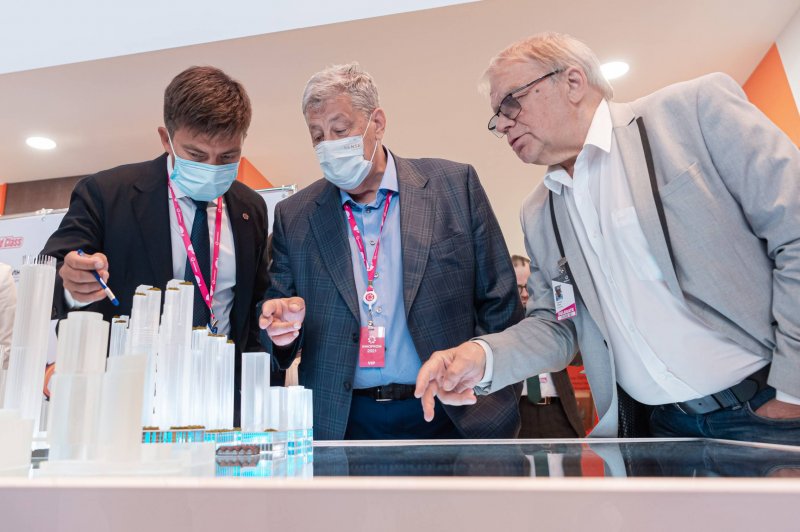 Open session entitled “Yekaterinburg-City. The creation of a new city center: a place for meetings, development, entertainment, work and life in one location ”took place within the framework of the third day of the international industrial exhibition“ INNOPROM-2021 ”. The idea and concept of the development of the quarter were discussed by such prominent experts as Senator Arkady Chernetsky, Chairman of the Regional Public Chamber Yakov Silin, President of ASRO "Guild of Ural Builders" Vyacheslav Trapeznikov, Honored Architect of the Russian Federation Mikhail Vyatkin, Deputy Head of Yekaterinburg Administration Rustam Galyamov, as well as eminent architects , heads of leading real estate agencies, event organizers, media representatives and caring citizens.

The new concept assumes that Yekaterinburg-City will become multi-level. The upper level is 5 skyscrapers dominated by the Iset Tower, the middle is a public space for walking, shopping and recreation with low-rise buildings. And on the third, underground level, there will be service zones, engineering communications, and a single underground parking lot. 30% of the project area will be a place to live, 30% - for work, and 40% - public spaces for recreation and entertainment. The planned implementation period of the project is 10 years.

The session participants admitted that the city had been waiting for a development project for many years that could harmoniously combine different types of space - a business center, housing, an area for walking and recreation, cultural space, etc. ... In their opinion, UMMC-Developer was able to create for the first time a concept for the development of Yekaterinburg-City, the successful implementation of which can be confidently believed. Despite the fact that the developer will have to face many difficulties: rather tight construction terms, a combination of different classes of real estate, building a property structure, prospects for recoupment, etc., the renewed Yekaterinburg-City will become a new word in Russian and even world practice. urban development.

Former head of Yekaterinburg Senator Arkady Chernetsky is sure - such a concept can to be realized in the city: “My team and I have always seen it as our task to save this quarter from chaotic development, to support its idea as a business center. We did not let those in there who could somehow harm this idea. However, at that time we had the idea that the business center is only an office building, where only business should live. It is now obvious that the dynamics of the development of Yekaterinburg is very high, that the development is becoming more and more thought-out quality, and monospaces are gradually losing their relevance. The vital interests of all citizens are important, their comfort and benefits for them. From this point of view, the new concept of "Yekaterinburg-City" is quite harmonious and can be successfully implemented with a competent approach. I am sure this concept will be close to all residents of the city. In the end, everyone is interested in the development of Yekaterinburg. "

" Downtown, city - in other words, a zone of concentration of business life, is in any major city in the world. Yekaterinburg-City presents a completely new, more balanced concept: a single public space filled with a variety of content, not only office and business. This idea did not come up right away. We analyzed the site for a long time to understand - what exactly to build here? If housing, what should it be? If there are office centers, how much are they needed? How to properly take into account and use the objects already existing here, including architectural monuments (security zones have already been created around). So the understanding came that everything can be done, but in a certain proportion. In order to end up with a new point of attraction for all residents of Yekaterinburg, "- said the author of the concept, chairman of the board of the Sverdlovsk organization of the Union of Architects of Russia Sergei Aleinikov.

According to General Director of UGMK-Zastroyshchik Yevgeny Mordovin, the business is in a renewed the quarter will receive good opportunities for development.

“ We're not going to wait until large industrial corporations will come to us to buy out entire buildings for their headquarters. We are creating a location for all citizens who can find a place in Yekaterinburg City for meetings, development, entertainment, work and life, "he says.

According to the Vice President of the Russian Guild, the managers and Developers Andrei Bril, the new concept of Yekaterinburg-City is also important in that it presupposes a single, harmonious architectural ensemble of all buildings, and in this regard will indeed play a big role in shaping the new, modern look of the Ural capital.

“I do not see the potential for conflict