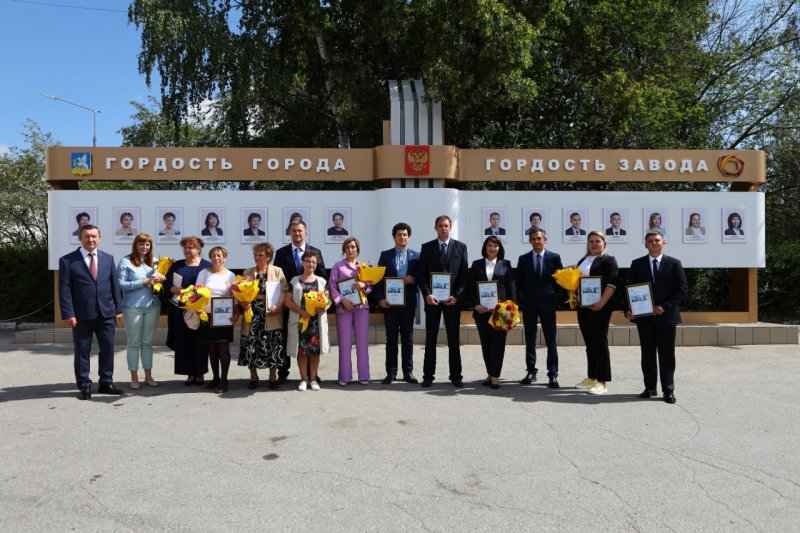 On the eve of the Metallurgist Day and the City Day, the Honor Board “The Pride of the City. The pride of the plant. " It was installed near the Metallurg Palace of Culture - where it was located in Soviet times. The Honor Board contains 14 photographs of the residents of Verkhnyaya Pyshmin, representing JSC Uralelectromed (an enterprise of the UMMC metallurgical complex) and city educational and healthcare institutions.

The opening ceremony was attended by the director of JSC Uralelectromed Vladimir Kolotushkin and the head of the city district Verkhnyaya Pyshma Ivan Solomin.

“It is very pleasant that on this holiday we are reviving the wonderful tradition of the city Hall of Fame. At our enterprise, the Alley of Honor did not cease to exist, however, it is very important that the townspeople also know those who, through their work, make a serious contribution to the development of the enterprise, and therefore to the well-being of the city district, said Vladimir Kolotushkin. - I congratulate all employees of Uralelectromed JSC, doctors and teachers, whose names will be the first to be entered on the City Board of Honor. This is a well-deserved award, professional recognition and just a sign of great gratitude for the work. ” Elza Mukhina, wire drawing machine for the production of copper wire rod Eduard Safin, mechanic of the motor transport department Anatoly Sekaev, etcher of the hot-dip galvanizing department Sergey Fedchenko and leading environmental engineer Anastasia Chechulina. All of them are not only professionals in their field who have achieved high results in their work, but also active participants in the public life of the city. So, Anatoly Sekaev is a finalist of the competition "We Glorify the Man of Labor", Sergey Fedchenko is a member of the volunteer movement, and Elza Mukhina is actively involved in various cultural events of the city.

City institutions are represented by doctors and teachers - namely, representatives of these professions a great burden of responsibility fell during the coronavirus pandemic. On the Board of Honor are portraits of the teacher of kindergarten No. 28 Lyubov Runkova, the history teacher of school No. 22 Elena Sedlova, doctors of the Verkhnepyshminsk city hospital named after P.D. Borodin - Alena Sibireva, Lidia Lodochnikova and other workers, whose work is especially noted by the townspeople.

A similar Honor Board was installed in Kirovgrad - on the territory of the city memorial complex, its opening is scheduled for Saturday, July 17. The new facility will display photographs of 14 well-known Kirovgrad residents - active participants in city events, sports and cultural life of the Kirovgrad city district, public figures and leaders of the volunteer movement. Among them are seven employees of the branch "Production of polymetals " JSC "Uralelectromed ", representatives of JSC "Kirovgrad hard alloys plant", city hospital and other organizations.

The Honor Boards are planned to be updated annually.

Финансовая аналитика, прогнозы цен на сталь, железную руду, уголь и другие сырьевые товары. More news and analytics on Metallurgprom telegram channel - subscribe to get up-to-date market information and price forecasts faster than others.
Сomments
Добавить комментарий
Комментарии (0)
On this topic
The eternal flame from the factory furnace, Victory Waltz, Procession of military equipment and a
June 24, Verkhnyaya Pyshma: Alley of heroes, the dress-up calculation, the Fate of the soldier and
Minute of silence, Fate of a soldier, procession of historical military equipment, planes in the
May 9 in Verkhnyaya Pyshma: Eternal flame from the factory oven, Victory Waltz, Procession of
Main day: BMZ celebrated Metallurgist Day
Metallurgist day will give verhnepyshminsky colorful fireworks
News Analytics
The production of passenger cars in Russia decreased by 2.8 times in eight29-09-2022, 11:19
Donetsk and Torez electrotechnical plants will start producing electrical29-09-2022, 11:37
Ukrainian coking plants reduced gross coke production by 55.2%29-09-2022, 11:28
China ramps up investment in transport to bolster economy29-09-2022, 11:33
The heads of mining companies named the main risks for business29-09-2022, 10:03
China production cuts in winter will give limited boost to steel markets -15-09-2022, 10:09
Steel prices may rise as manufacturers stop production11-09-2022, 14:06
IREPAS: The global long products market is in a "dramatic situation"10-09-2022, 20:49
Steel prices are unlikely to rise significantly in the near future - analysts02-09-2022, 22:58
Steel prices may move up on new data from China31-08-2022, 12:19
Sign in with: