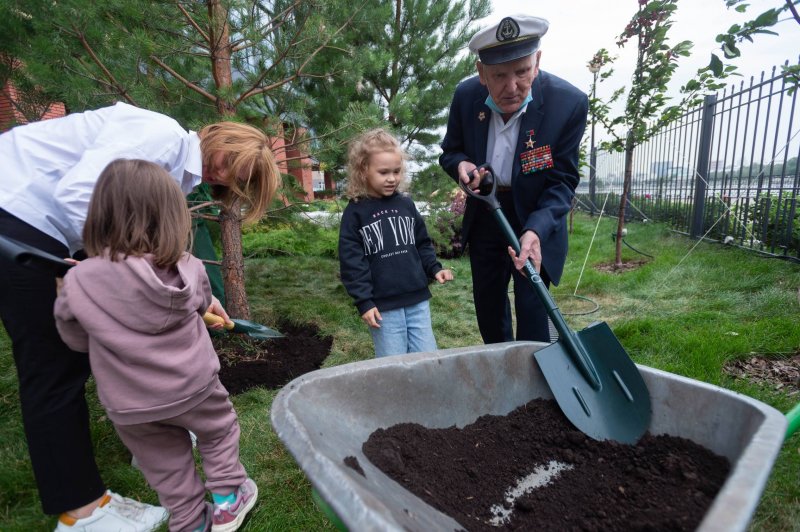 Pines with an unusual history will grow near the elite-class house in the Makarovsky residential complex on the Olympic Embankment. They were planted here by the famous veteran of the Great Patriotic War Anatoly Terekhov. For 38 years in a row, he has been planting trees every year in different cities of Russia and even abroad in memory of the people of Kuzbass who died in the war.

This is a very good story. Anatoly Mikhailovich Terekhov, a native of Kemerovo, is 95 years old. From here in 1944 he went to the front with his brothers. He fought in the 183rd Tank Brigade of the 10th Tank Corps of the Fifth Guards Tank Army, took part in the capture of Konigsberg, and met victory in Poland, near Krakow. After the war he worked in the coal industry and did not stop looking for brothers missing in the battlefields. The place of their burial (mass grave) near the village of Gorshechnoye, Kursk region, he managed to find almost 40 years later, in 1983.

“Then I decided to plant a cedar in memory of the brothers. But in this grave there were still 435 soldiers who were liberating the village. And I thought it would be fair to honor their memory. Therefore, I planted not one cedar, but a whole Walk of Fame. Since then I have been doing this every year, I have traveled almost all over the country and have been abroad more than once - I managed to plant more than three thousand trees, "says Anatoly Terekhov.

Cedars and other trees of Anatoly Mikhailovich grow in Moscow, Kursk, Volgograd, Kaluga, Veliky Novgorod. They can be seen in Belarus, Serbia and even Canada. Now pine trees will decorate the Iset embankment near the Makarovsky residential complex in Yekaterinburg. General Director of UMMC-Zastroyshchik Evgeny Mordovin, Deputy Chairperson of the Legislative Assembly of the Kemerovo Region Irina Fedorova, Deputy Governor of Kuzbass Alexei Kharitonov and young pupils of the “World of Discovery” children's development center located in the Makarovsky space.

“These are beautiful and strong trees that can live for over 300 years. This means that the memory of the feat accomplished by the heroic Soviet people will remain for centuries. Here, in the very center of Yekaterinburg, people will walk along the embankment next to such a wonderful modern house and remember. The idea to plant trees in the Urals came to me back in February, but in the spring it did not work out - so I arrived in the fall. In general, I really liked the Ural capital. It can be seen that the people of Yekaterinburg love their city, develop it, build something new to make it better, "says Anatoly Terekhov.

UMMC-Developer takes care of history. We have reconstructed and breathed new life into several objects of cultural heritage: the Simanovskaya mill, which is more than 130 years old, the laboratory building at the mill, which now houses the Children's Development Center “World of Discovery”. Next to the historic wall, we restored a monument to the workers of the Yekaterinburg flour mill who did not return from the Great Patriotic War. Planting trees is a good tradition. These strong strong pines came to us from the last festival of landscape art "Atmosphere". We decided that they should continue to delight the townspeople. They were planted on the territory of the house itself, but everyone who wants to walk along the embankment can admire them, '' said Evgeny Mordovin. “And the guys who every day study in the children's center“ World of Discovery ”will take care of them and send Anatoly Mikhailovich a photo report about how the pines took root, how they grow.”

“Kuzbass and the Urals are tightly linked by history. During the war in Siberia, metal was mined, it went to the Ural factories, which produced tanks during the war. Every second tank was made of this metal. Therefore, Anatoly Mikhailovich and I thought it important to plant cedars in Yekaterinburg. The idea was supported by the heads of the regions - Kuzbass and the Sverdlovsk region: on September 3, in honor of the 76th anniversary of the end of World War II and the Ural-Kuzbass friendship, Anatoly Mikhailovich Terekhov and I will plant an alley of 20 cedars on the site near Lake Shartash, ”said Irina Fedorova.