Mednogorsk metallurgists removed 16 tons of garbage from the city park 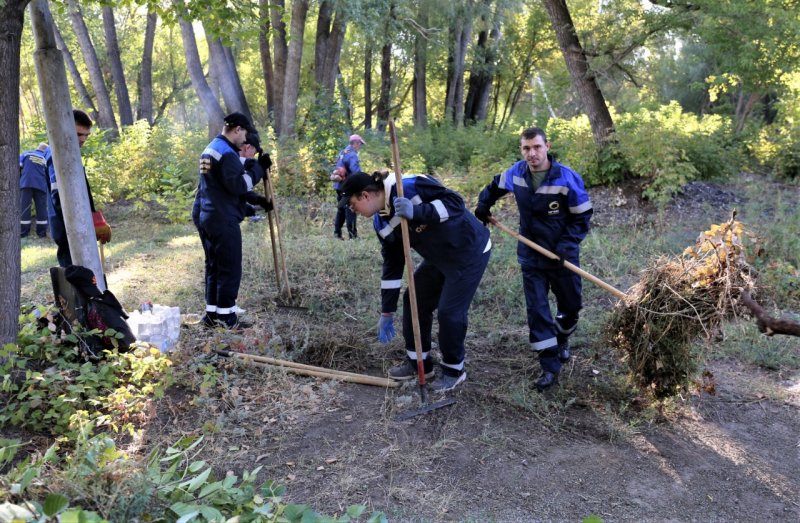 The team of Mednogorsk MSK (an enterprise of the metallurgical complex of the UMMC) organized a cleanup on the territory of the city park as part of the ecological action "Clean Shores".

The city park was founded by the first builders copper and sulfur plant in the middle of the last century. For many years it served as a resting place for the company's employees and their families. Attractions worked, dancing evenings were held, cafes functioned. Since the late 90s, the park has fallen into disrepair. However, thanks to the persistence of metallurgists and townspeople, who defended their right to receive the federal grant "Formation of a comfortable urban environment", in 2021, landscaping work began here at a cost of about 10 million rubles.

- Considering that the project for the revival of the central city the park is designed for seven stages, we only welcome any additional charity events to create space for active recreation for residents of all ages, - says the head of the city Andrey Nizhegorodov.

More than 70 workers from MMSK shop departments took part in the environmental campaign ... The main scope of work fell on the overgrown and littered areas of the park, so the main tools for the cleanup were pruners, chainsaws, rakes and garbage bags. In addition, the plant has allocated three units of automotive equipment.

- We have tried to take a responsible attitude to this noble cause. We call on other enterprises of the city to join our initiative. For us, this is not the first experience of carrying out such environmental campaigns - every year we direct them to fixed territories in the city. Such work, if performed by a close-knit team, is not difficult to do, and the result will delight the eye for a long time. Moreover, almost all participants in today's subbotnik are residents of the city who will come here to relax with their relatives and friends, - noted the general director of MMSK Ilfat Iskhakov.

We add, during the subbotnik with the participation of workers About 16 tons of garbage were removed from the territory of the city park to the solid waste landfill.

Финансовая аналитика, прогнозы цен на сталь, железную руду, уголь и другие сырьевые товары. More news and analytics on Metallurgprom telegram channel - subscribe to get up-to-date market information and price forecasts faster than others.
Сomments
Добавить комментарий
Комментарии (0)
On this topic
One of the best children's tennis tournaments in the country "UMMC-Open" has started in
Manufacturing of advertising structures in Odessa
Hyatt Place Ekaterinburg: official opening of the first Hyatt Place hotel in Russia
Buying and selling metal
Stainless steel from the company "alpha Old"
Kazan on the map of Russia
News Analytics
Tata Steel merger plan to secure long-term profits03-10-2022, 10:46
US hydrogen prices to drop to zero dollars per kg in 5 to 6 years: Platts02-10-2022, 21:53
The production of passenger cars in Russia decreased by 2.8 times in eight29-09-2022, 11:19
Donetsk and Torez electrotechnical plants will start producing electrical29-09-2022, 11:37
Ukrainian coking plants reduced gross coke production by 55.2%29-09-2022, 11:28
China production cuts in winter will give limited boost to steel markets -15-09-2022, 10:09
Steel prices may rise as manufacturers stop production11-09-2022, 14:06
IREPAS: The global long products market is in a "dramatic situation"10-09-2022, 20:49
Steel prices are unlikely to rise significantly in the near future - analysts02-09-2022, 22:58
Steel prices may move up on new data from China31-08-2022, 12:19
Sign in with: