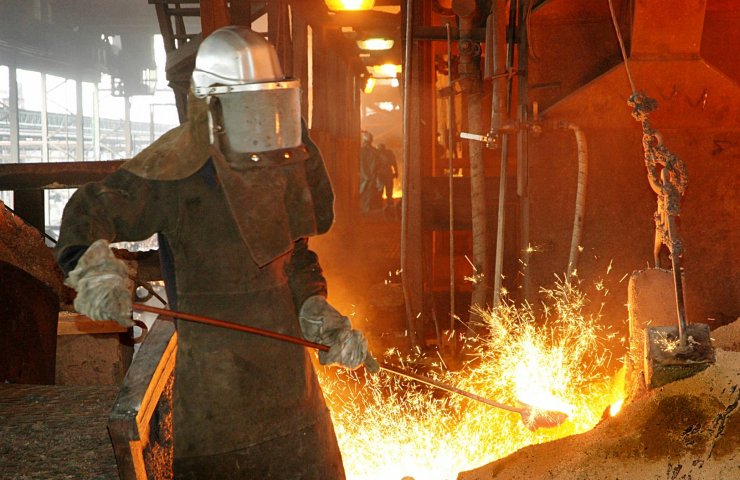 commodities demonstrated mixed performance in 2019. In each case, the dynamics was influenced by factors unique to a sector. It is possible to draw certain overall conclusions and to suggest trends 2020 on the basis of available statistics, said Boris Krasnozhenov, head of analytical research at Alfa Bank.

First of all, it should be noted that China is absolutely dominant role in almost all commodity markets. For example, China consumes and produces more than 50% of world steel went up close to the figure of 1 billion tons of production in 2019. For comparison, the United States this year will produce a little more than 85 million tons of steel, and Russia - circa 71-72 million tonnes. China consumes about 55% of the global total of Nickel, aluminum and copper according to statistics 2018, 2019. A player with such a big share in any of the major commodity segments, of course, has an impact on the price dynamics. However, we see that Nickel prices are rising 35% in the same time, while copper prices rose only 6%, and aluminum prices remained virtually unchanged. We believe that the difference in price dynamics is caused by three main factors – (1) a share of self-sufficiency of China, (2) the situation of supply in the sector and (3) the effect of strategic initiatives ("One belt and one road" and "the Northern sea route") for infrastructure investment. I must say that China in General is not interested in the import of commodities at high prices in case of not full self-sufficiency in a particular segment.

Dynamics of the basic commodities 2019 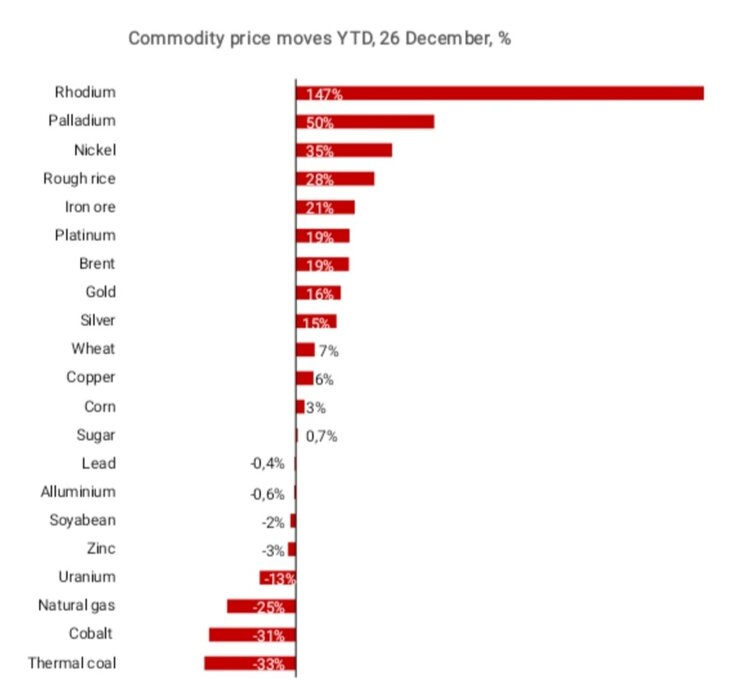 Analyzing these factors, it is possible to draw conclusions that correlate with the dynamics of prices in 2019 and point out the main vectors of development in 2020.

platinum group Metals. Despite the significant decline in sales of passenger cars in China in 2019, the prices of palladium and rhodium were the leaders of growth. China produces palladium, being the largest consumer. The increased supply of palladium from Russia and South Africa is limited. After consolidation of palladium is around $1900-2000 per ounce, we can expect further growth.

Nickel. China is the largest producer of stainless steel, and is used about 70% of Nickel and a major producer of batteries, where the premium Nickel is increasingly used. Production of Nickel in China is limited, and the country imports the needed amounts of Nickel, ferronickel and Nickel ore. The increased supply of Nickel is limited due to the lack of major new projects, and in the segment of Nickel ore support the Nickel price have restrictions on exports and production in Indonesia and the Philippines. Thus, we can expect the return of the price of Nickel at $17000 plus per tonne in 2020.

Iron ore. China consumes about 2/3 of the iron ore in the world. He imports most of iron ore as its own field, basically, have a low iron content and low volume. The world's largest players in Brazil and Australia to provide supply growth, but, according to our assessment, it lags behind the growth rate of steel production in the Asia-Pacific region. We expect consolidation in iron ore prices around $90 per tonne (62%, cif, China), with a possible move above $100 next year. Iron ore is one of the best indicators of the volume of infrastructure investment in the region.

Metallurgical coal. Given the lack of reliable statistics on grades of coking coal produced in China, and used coking technology, it is difficult to assess the situation with self-sufficiency in China. We believe that, consuming more than 60% of the world's coking coal, China will continue to import premium brands of coking coal. New deposits of premium brands in the world, not many. The price of hard coking coal may return to the level of $180-200 per tonne on FOB basis as 2020.

Steel. China produces about 1 billion tons of steel, exporting around 60-70 million tons. We expect further growth of consumption and production of steel in China (about 5% in 2020) on the background of growth of investment in fixed assets, and investments in infrastructure projects in the framework of the "One belt and one road". The growth of steel production in China will support prices of iron ore and coking coal. We expect further recovery in steel prices on the world market next year. The price of hot-rolled coil can return to the level of $500 per tonne on FOB basis.

Copper. China imports about 2/3 of the consumed volume of copper, consuming about 60% of all copper produced in the world. The growing volume of infrastructure investment supports demand for copper. The balancing factor is the increase in supply from new projects with medium and small size. Most of the major projects in the industry do not generate sufficient IRR in the copper price below $7,000 per tonne. Considering all these factors, we expect copper prices to around $6000 per tonne next year, with possible fluctuations in the range of $5500-6000K per ton.

Aluminium. China is fully secured with aluminium and is a net exporter of this metal. Global demand for aluminium shows no growth, while the proposal begins to increase due to a number of projects and a significant amount of reserves with the perimeter of the warehouses LME. It should also be noted that aluminium finds wide application in the initial stage of major infrastructure projects. We expect that the price of aluminium in 2020 will remain at $1700-1800 per ton (cash, LME) with downside risk to $1600-1700 per ton.

Gold. The world's Central Bank, including Bank of China, continue to increase gold reserves. China is the largest gold producer in the world. It should be noted that there is a significant divergence in the dynamics of supply and demand between physical gold and “paper” gold (derivatives market). In General, the world's Central Bank not interested in a sharp rise in gold prices at the moment when they are increasing their reserves. In the absence of a serious escalation of macro and geopolitical risks can be expected that the price of gold will remain at $1500-1600 per ounce. However, in the case of rise of risks in the global economy, the potential growth of gold prices can be very significant. Gold is a protective asset in case of a crisis, while the liquidity of the asset relative to other financial instruments is very low.

Финансовая аналитика, прогнозы цен на сталь, железную руду, уголь и другие сырьевые товары. More news and analytics on Metallurgprom telegram channel - subscribe to get up-to-date market information and price forecasts faster than others.
Сomments
Add a comment
Сomments (0)
On this topic
Scrap metal market at the beginning of April
Aluminum market overview in Q1 2019
Rusal: global demand for aluminum will grow by 3 percent
Review of "Norilsk Nickel" the market of metals: Nickel, platinum and palladium
The world market for rare earth metals will grow by 10.4% per year
Aluminum dissonance: why prices have declined despite supply shortages?
Recommended:
Chinese steel mills to suspend several production lines in August
India launches carbon trading market
Ukraine reduced the export of scrap metal by eight times
News Analytics
India prepares to lift export duties on steel09-08-2022, 08:34
Russian metallurgists will need more than 10 years to replace imports of key09-08-2022, 07:23
China reduced steel exports in July by one million tons or 12%08-08-2022, 17:41
World steel prices have moved from a protracted fall to growth08-08-2022, 16:27
Ferrexpo's net profit in the first half of the year decreased by 88%03-08-2022, 10:20
The US market may begin a collapse in prices for thick sheet14-07-2022, 09:39
High iron ore shortage could halt metallurgy's green transition28-06-2022, 14:02
Price volatility hits global steel market27-06-2022, 19:28
Recovery in China could be key to rising global steel prices - MEPS24-06-2022, 14:00
Conflict in Ukraine spurs Europe's drive for clean energy03-06-2022, 12:14
Sign in with: