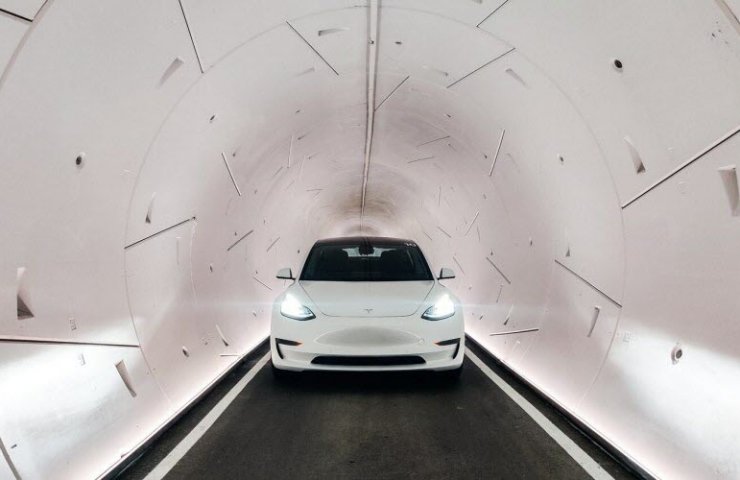 Elon Musk has struck a deal to build his network of tunnels under the city that never sleeps to transport people seamlessly using Tesla's automatic electric vehicles. This earned the Vegas Loop project the nickname "Tesla in the Tunnels".

In just three years, about 47 kilometers of tunnels will be dug. The project envisions 51 stations and ultimately 57,000 users per hour. This is a great way to deal with heavy traffic and congested transport.

The idea is simple: traffic is congested, due to the lack of flying cars, the only way to facilitate it is to suggest another route, underground. In theory, at the whim of Elon Musk at the end of 2016, The Boring Company was created for this purpose: to dig tunnels so that people can use fully automated Tesla cars, like traveling on a tram or subway. Except that users do not need to share space with other passengers, and the car does not stop at all stations.

Tesla in fully automatic mode either enters the tunnel directly, or in order to get to the tunnel, you need something like an elevator.

The first line already exists: it connects three stations to the Las Vegas Convention Center (LVCC), which is almost 3 km long. It took a year to build these two tunnels and three stations (including one underground).

Финансовая аналитика, прогнозы цен на сталь, железную руду, уголь и другие сырьевые товары. More news and analytics on Metallurgprom telegram channel - subscribe to get up-to-date market information and price forecasts faster than others.
Сomments
Add a comment
Сomments (0)
On this topic
How Tesla became the world's most valuable automaker
Yuzhmash told whether it is possible to launch reusable rockets from the Black Sea
An Internet scammer in a couple of hours "earned" $ 32,000 on Twitter using the nickname
Elon Musk: from hyperloop to the conquest of Mars
Environmentalists oppose Elon Musk's plan to build a Starbase in Texas
Top 10 digital trends in the global steel industry
Recommended:
Fitch downgrades 2022 global GDP growth forecast to 2.9% from 3.5%
The largest steel company in Austria announced its readiness to stop gas supplies from Russia
Russian lead production plants are on the verge of closing due to a complete halt in exports
News Analytics
Tesla in the second quarter reduced the supply of cars by 18%04-07-2022, 10:24
Steel prices fall due to weakening European demand and problems in China04-07-2022, 10:40
The United States refused to impose duties on Russian metals and increase02-07-2022, 09:05
Daimler Truck began testing Actros tractor on liquid hydrogen02-07-2022, 08:54
Volvo invests $1.25 billion to build electric vehicle plant in Slovakia01-07-2022, 18:17
High iron ore shortage could halt metallurgy's green transition28-06-2022, 14:02
Price volatility hits global steel market27-06-2022, 19:28
Recovery in China could be key to rising global steel prices - MEPS24-06-2022, 14:00
Conflict in Ukraine spurs Europe's drive for clean energy03-06-2022, 12:14
US steel market sentiment becomes more price neutral05-05-2022, 10:15
Sign in with: