The head of the Pentagon: concrete evidence that Iran is preparing attacks against the American Embassy there

the Minister of defence, the words of the President of the United States Donald trump's planned Kassem Soleimani attacks on four American embassies, nothing concrete has been confirmed. 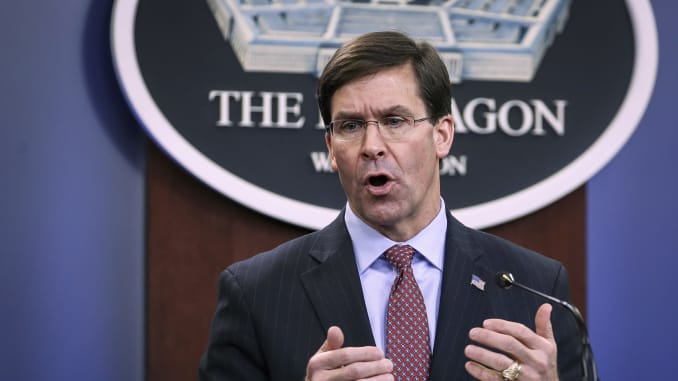 the Minister of defense mark Esper in an interview with CBS ' "face the nation" on Sunday said that there is no concrete evidence on the part of employees of the intelligence that Qassem Soleimani planned the attack on four US Embassy statement, which was made by President Donald trump to justify the killing of the military leader of Iran.

According to the head of the Pentagon, which quotes Reuters, he admits that could be planned additional attacks on the U.S. Embassy, but the comments trump to Fox News were not based on concrete evidence.

"the President said that perhaps there may be additional attacks on the Embassy. I share that view," said Esper. "But the President has not provided specific evidence".

On the question of whether to grant intelligence officials specific evidence on this issue, he said, "I have not seen any against four embassies".

After confirmation that Qassem Soleimani was killed by US air strike in Baghdad, administration officials trump's claim that they acted because of the inevitable threat of attacks on American diplomats and military personnel in Iraq and throughout the region.

Democrats and some Republicans in Congress questioned the validity of an attack on Iran and said that they were not given proper, detailed explanation.

national security Adviser USA Mike O'Brian repeated review of the Pentagon that the administration has a trump "intelligence" that the threat is imminent, but does not comment on evidence that four American Embassy would be attacked.

Recommended:
SpaceX запускает еще 60 спутников для своего проекта широкополосного интернета
"ArcelorMittal Krivoy Rog" in 2019 paid to the budget UAH 340 million of environmental taxes
Tesla has introduced a new aluminium alloys for parts of electric vehicles
On this topic
CNN: Ukrainian airliner was shot down by Iran missiles surface-to-air Russian production
Iran is preparing to strike back at the United States military facilities
Russia accused of illegal trade in chemicals – Reuters
On the background of sharp reductions in the steel mill at NLMK USA workers demand the abolition of
Los Angeles Times: a Perfect storm in the American market of steel
Топ 10 цифровых трендов в мировой металлургической промышленности
Add a comment
Сomments (0)
News Analytics
UN: one in five working youth live in poverty20-02-2020, 09:39
Coal mining is unprofitable: the government plans to find the miners new jobs19-02-2020, 21:11
Car-grain truck KrAZ-6511С4 will increase the efficiency of agribusiness group18-02-2020, 15:10
Sanjeev Gupta bought another bankrupt steel plant18-02-2020, 10:09
The IMF team goes to Ukraine for talks18-02-2020, 09:39
UN: one in five working youth live in poverty20-02-2020, 09:39
The Chinese company has patented the coronavirus, "Fairever"16-02-2020, 19:13
Stronger than steel, harder than diamond: is called the graphene material of14-02-2020, 15:26
FT: the US Treasury Deripaska is suspected of laundering money for Putin14-02-2020, 12:12
Nissan requires a payment of $ 90 million from ex-boss Carlos Ghosn12-02-2020, 11:27