A rare metal asteroid about three times farther from the Sun than our planet may reveal secrets about the molten core of the Earth, and scientists want to know all about it. 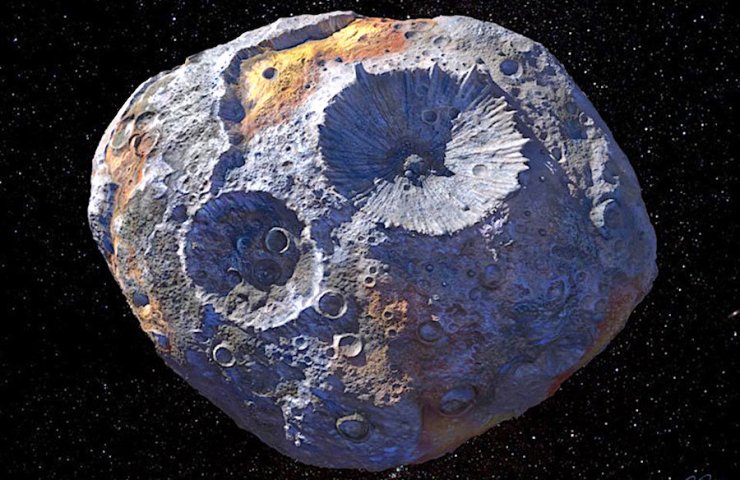 The asteroid Psyche, located between Mars and Jupiter, is one of the most massive objects in the asteroid belt in our solar system. Its diameter is about 200 kilometers.

Psyche's exact mineral composition is still unclear, but scientists believe that the asteroid is mainly composed of iron and nickel. It has been hypothesized that a piece of iron of this size could be worth about 10,000 quadrillion dollars, which is more than the entire economy on our planet.

Scientists believe Psyche may have been the metal core of an early planet that lost its mantle and crust due to collisions that could have occurred early in the formation of the solar system.

In 2022, NASA will send an unmanned spacecraft to Psyche to study it closer and better determine its composition.

Meanwhile, a new study, published in The Planetary Science Journal, looked at Psyche through the Hubble telescope at two specific points of its rotation to capture both sides of the asteroid.

The study includes the first observations of Psyche in ultraviolet light, which contributes to our understanding of its surface and its possible composition.

NASA intends to send a mission to Psyche led by Arizona State University.

“We are building space equipment and preparing to launch in August 2022,” Lindy Elkins-Tanton, planetary scientist who is the mission's chief investigator, told CNN. The mission launch, originally slated for 2023, has been pushed back to 2022 and will take place from Cape Canaveral Air Force Station using a SpaceX Falcon Heavy rocket.

According to Elkins-Tanton, the unmanned spacecraft should reach Psyche by January 2026 and will orbit the asteroid for 21 months, mapping and studying it from a distance.

When he gets to Psyche, the mission will be the first to photograph the asteroid.

Scientists plan to immediately make these images available to everyone on Earth so they can see and study them, possibly within 30 minutes of receiving them, Elkins-Tanton said.

Regarding this staggering estimate that Psyche could be worth $ 10,000 quadrillion, Elkins-Tanton says she takes responsibility for naming the number during an interview when the mission was first announced in 2017 NASA.

According to Elkins-Tanton, while the talk of asteroid mining is evolving here on Earth, Psyche is not a goal we should be aiming for.

“We cannot bring Psyche back to Earth. We have absolutely no technology to do that, ”Elkins-Tanton said.

According to her, even if it was possible to get metals from Psyche with delivery to Earth, it would most likely bring down the markets and bring the cost of steel to almost zero.

Recommended:
Revenue of Metinvest's Metallurgical Division in September increased by $ 24 million
Toyota more than doubles earnings forecast amid rebounding sales in China
Donald Trump wants to finally hit the mining industry in China and "annoy" Joe Biden
On this topic
Virgin Galactic reveals the interiors of the new space plane
Yuzhmash told whether it is possible to launch reusable rockets from the Black Sea
The company of Ukrainian businessman plans to deliver on the moon scientific equipment
In climate change the fault of the rich - a new study by British scientists
Asteroid mining would serve as the impetus for the colonization of other planets, says market
5 signs that the global economy is hurtling towards recession
Add a comment
Сomments (0)
News Analytics
ArcelorMittal stops steel production in Spain due to workers' strike04-12-2020, 19:47
KVSZ demanded to adopt a program for updating the freight car fleet of JSC04-12-2020, 17:19
The Czech Republic has invented a paper that destroys the coronavirus04-12-2020, 13:55
Oleg Gladkovsky's Bogdan Motors company demands to protect the Ukrainian04-12-2020, 13:22
Metinvest increases environmental spending to $ 384 million in 201904-12-2020, 11:13
European Union scrap collectors worried about possible export restrictions18-11-2020, 10:41
Occupational diseases of workers in the extractive industry: types and ways to16-11-2020, 17:49
Eurofer expects recovery in EU steel demand05-11-2020, 09:47
Hot rolled carbon steel demand will continue to grow by 4% pa until 203004-11-2020, 16:14
Platts Steel Trade Review: China Will Decide Asia's Fate30-10-2020, 10:04
Sign in with: