Complete the requirements for traction winches are used as haulage and shunting equipment is given in GOST 55158-2012. 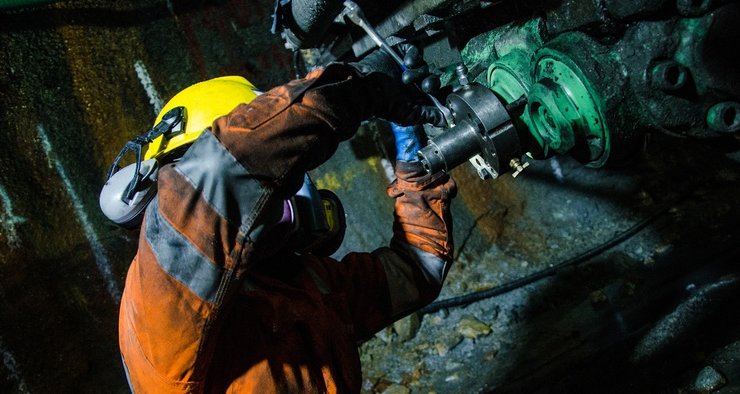 In the course of mining operations regularly arises the need of transportation of various cargos. The need for this may arise both vertical and horizontal planes. In this situation traction winch is considered the most universal mechanism. It can act as an independent equipment and enter into equipment other lifting mechanisms.

Requirements for winches used in the mining works

Note that the main purpose of the winch in creating traction. It follows from this that as an independent mechanism, it can be used to move cargo in planes close to the horizontal (inclined drifts and tunnels). In this case, it is equipped with a drum for reeling the cable of higher capacity.

To move cargo vertical pull winch is mainly used in the kit with gear, which by changing the gear ratios, allows to operate with weights greater than the force developed a winch.

mining operation used the winch with manual, hydraulic or electric clock drive. Of course the greatest power have the latter two. As for the actuator, in terms of its use in mines and mine workings, hazardous gas and dust, the latter must be made explosion-proof.

Requirements for traction winches are used as haulage and shunting equipment is given in GOST 55158-2012. According to paragraph 4.2.2, these mechanisms are guaranteed to provide:

Also in paragraph 4.2.4 of the document there is a limit on the width of the traction winch, used in mining operations — it should not exceed 950 mm. It is necessary for the unimpeded delivery of the equipment to the place of installation in confined conditions of underground workings.

When choosing the winch for use in mining operations it is necessary to pay attention to the conditions in which its application was acceptable. So the letter "T" in the marking indicates that the equipment can be used at ambient temperatures from -40 °C to + 35 °C. If the marking is present, the index "T", these winches do not operate at temperatures below zero.

Recommended:
Dneprovskiy metallurgical plant has completed a major repair of sinter machine
Как реформа рынка электроэнергии в Украине может привести к коллапсу и что с этим делать
The natives refused to accept Rio Tinto after the blasting of their sacred caves in the Pilbara
On this topic
Services company "TC Riggers"
The choice of water filters in Almaty
Eyelets for attaching cylinders
Truck scales
Станки с ЧПУ для гибки листового металла
Возможности и функционал фрезерного оборудования
Add a comment
Сomments (0)
News Analytics
Strategy of defense in space07-07-2020, 10:49
AVTOVAZ predicts the fall of the Russian car market by 20-25%06-07-2020, 16:52
Novokramatorsky Mashinostroitelny Zavod re-entered the market of coke chemical06-07-2020, 16:50
DMK exceeded the plan of sales in June, shipping of metal less than a year ago06-07-2020, 16:35
Metinvest announced the final stage of negotiations on the loan of 62 million06-07-2020, 14:52
Steel prices in southern Europe are rising, despite weak demand23-06-2020, 10:54
Analysts expect strong demand growth for steel in China10-06-2020, 11:57
Global steel consumption in 2020 will be reduced by 6.4% - Worldsteel04-06-2020, 13:53
American steelmakers are faced with an unexpected problem associated with the14-05-2020, 09:09
Relying on the incentives, Chinese steelmakers increase production30-04-2020, 10:20
Sign in with: