The rocket was launched from the cosmodrome at Cape Canaveral (Florida) at 21:14 US East Coast time 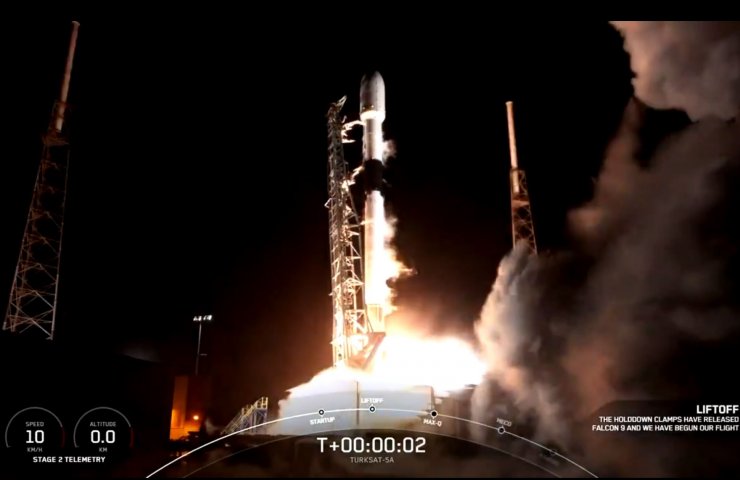 The American company SpaceX has launched a Falcon 9 launch vehicle with the Turkish communications satellite Turksat 5A into orbit. This satellite will be the fourth Turkish spacecraft in orbit.

The rocket launched from the Cape Canaveral cosmodrome in Florida at 21:13 (05:13 Moscow time), according to the website SpaceX . The device is designed to provide digital television and broadband Internet services. The satellite will cover Turkey, Europe, North Africa and the Middle East.

The founder of Tesla and SpaceX, Elon Musk, became the richest man in the world, according to the Bloomberg Billionaires Index. This happened on January 7 due to the growth of Tesla quotes by 4.8%.

Recommended:
Uranium mines of Ukraine will resume mining on January 12 - administration of SE "VostGOK"
Protests against the work of a by-product coke plant continue in Kharkiv
Russia may restrict the export of metal products due to a sharp rise in prices on the domestic market
On this topic
Russia launches environmentally friendly space rocket "Angara-5"
NASA Accelerates Mission to $ 10,000 Quadrillion Metal Asteroid
Panasonic announced plans to increase battery capacity for electric vehicles by 20%
Elon Musk has decided to change the grade of steel for plating spaceship Starship
SpaceX launches 60 more satellites for its broadband internet project
Elon Musk presented Starship
Add a comment
Сomments (0)
News Analytics
YUZHMASH expects the adoption of the new space program of Ukraine in the near22-01-2021, 15:18
Eleven miners still await rescue from exploded gold mine in China22-01-2021, 12:34
Rivne NPP shut down power unit No. 122-01-2021, 12:13
Russia will start producing "green" hydrogen22-01-2021, 10:47
High-speed railway launched in China Beijing-Harbin highway22-01-2021, 10:22
China will overtake the United States to become the world's largest economy in27-12-2020, 12:04
The shortage in the US steel market will last at least until the end of the25-12-2020, 11:36
Steel production in China to surpass one billion tons this year23-12-2020, 10:59
Iron ore prices hit seven-year high and continue to rise15-12-2020, 10:26
Prices for metallurgical raw materials continue to rise in regional markets10-12-2020, 11:32
Sign in with: