The Tianwen 1 probe weighing about five tons consists of an orbiter, a lander and a rover. 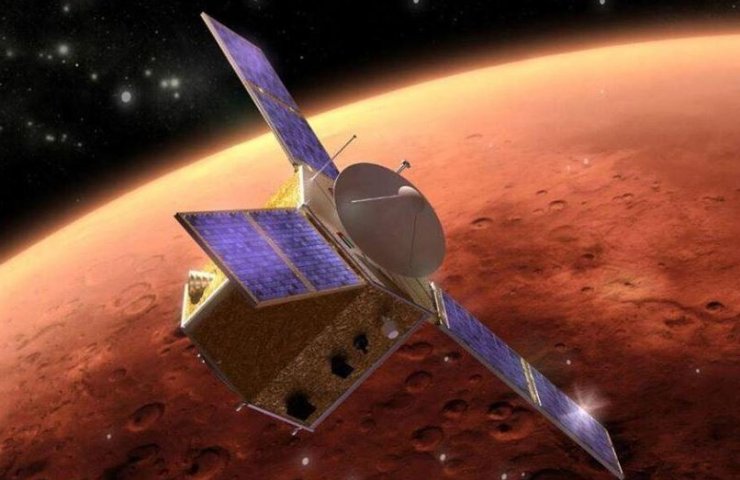 According to CNSA, the probe is functioning stably and should slow down before entering Mars orbit in more than a month and preparing for landing on the Red Planet.

Since its launch on July 23, 2020, Tianwen 1 has taken a photograph of both the Earth and the Moon. He also took a selfie. During the flight, it performed three orbit corrections, a deep-space maneuver, and a self-test of payloads.

The Tianwen-1 probe weighing about five tons consists of an orbiter, a lander and a rover. It is called upon to carry out an orbital flight, landing on the surface of Mars and moving along it within one mission.

After entering Mars orbit, the spacecraft will spend two to three months exploring potential landing sites using a high-resolution camera to prepare for landing in May.

The most difficult part of the mission will be a soft landing - an autonomous process of operation of the probe, which lasts from seven to eight minutes. The probe will use its aerodynamic shape, parachute and retro rocket to brake and lower its legs for landing.

After landing, the rover will start its work, in particular for scientific research with an expected service life of at least 90 Martian days /about three months on Earth /, and an orbiter with a design life of one Martian year /about 687 days on Earth /will relay messages to the rover during its own scientific sounding.

Tianwen means "Questions to Heaven." It got its name from the poem of the same name written by Qu Yuan (about 340-278 BC), one of the greatest poets of ancient China. It symbolizes the desire of the Chinese nation to seek truth and explore nature and the universe.

Recommended:
Sriwijaya Air SJY 182 from Jakarta to Pontianak disappears from radar immediately after takeoff
Ukraine's economy returned to pre-pandemic indicators and will grow by 5% in 2021
Coal is a new hope: scientists have succeeded in turning fossil fuels into anode-grade graphite
On this topic
Chinese lunar module to conduct geological exploration on Earth satellite
Bacteria will help space mining industry - results of an experiment on the ISS
Virgin Galactic reveals the interiors of the new space plane
NASA has published plans to build a manned base on the moon
The Russian space Agency has accused trump of the creation of the basis for seizure of territories
Steel laboratory is being built in Japan to train lunar robots
Add a comment
Сomments (0)
News Analytics
Industry association predicts 8% growth in passenger car sales in China in 202123-01-2021, 11:07
YUZHMASH expects the adoption of the new space program of Ukraine in the near22-01-2021, 15:18
Eleven miners still await rescue from exploded gold mine in China22-01-2021, 12:34
Rivne NPP shut down power unit No. 122-01-2021, 12:13
Russia will start producing "green" hydrogen22-01-2021, 10:47
China will overtake the United States to become the world's largest economy in27-12-2020, 12:04
The shortage in the US steel market will last at least until the end of the25-12-2020, 11:36
Steel production in China to surpass one billion tons this year23-12-2020, 10:59
Iron ore prices hit seven-year high and continue to rise15-12-2020, 10:26
Prices for metallurgical raw materials continue to rise in regional markets10-12-2020, 11:32
Sign in with: