Developed by NUST MISIS scientists is the most effective and cheapest way to obtain technical magnesium from all that exist today. 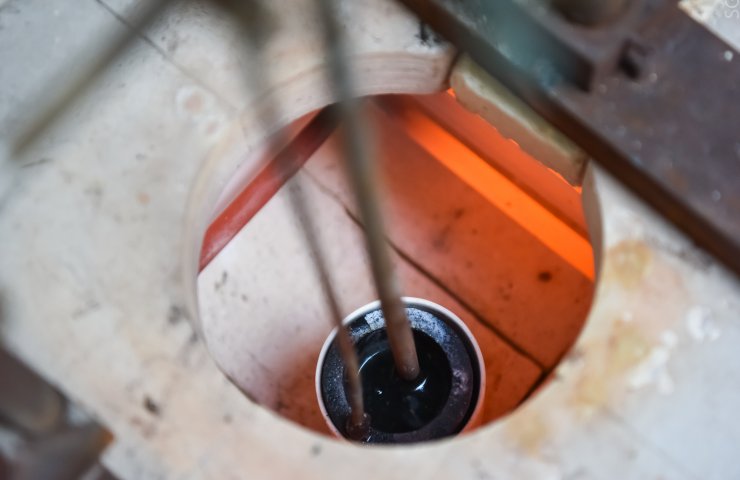 A team of scientists from the Department of Non-Ferrous Metals and Gold of the National Research Technological University "MISiS" has found a way to reduce the cost of the process of obtaining technical magnesium, which is widely used in the aviation and defense industry. By improving the process, the scientists were able to increase the magnesium yield by 15% and reduce energy consumption by 5%. As a result, the productivity of magnesium plants can increase up to 10%.

However, there is a problem - in traditional electrolysis conditions, the current efficiency does not exceed 80%. This means that 100% of the current spent on the electrolysis process "pays off" only 80%, the remaining 20% ​​is wasted. This is due to the fact that, "scattering" to the cathode and anode, magnesium and chlorine begin to combine again after some time. A team of NUST MISIS scientists have found a way to improve the electrolysis process so that the current efficiency increased to 95%, that is, no more than 5% of magnesium began to be "lost".

“Under traditional conditions of electrolysis of a magnesium-chlorine compound, liquid magnesium is released to the cathode, and chlorine gas to the anode. Due to the fact that the magnesium droplets are mixed with the gas, they easily rejoin. We found a way to prevent this process by lowering the temperature of the electrolyte, and forced the release of magnesium in solid form, ”says Andrey Lysenko, Ph.D., head of research, associate professor of the Department of Non-Ferrous Metals and Gold, NUST MISIS.

However, it remained to understand how to separate the solidified magnesium from the cathode, because simply scraping it off is difficult and ineffective. Then the scientists decided to try to bring magnesium into a liquid state - the very one with which they fought initially. But this time, time played a decisive role: it turned out that if the temperature of the electrolyte is raised quickly enough - within an hour - to make the magnesium melt, and then quickly get the molten magnesium out of the electrolyte, no more than 5% of the metal will be lost (versus 20% in traditional technology).

It should be noted that electrolysis is not the only way to separate the MgCl2 compound. For example, vacuum distillation is sometimes used, but this is a much more expensive method. It turns out that the development of NUST MISIS scientists is the most effective and cheapest way to obtain technical magnesium from all that exist today.

In the near future, scientists plan to tackle the issue of automating the entire cycle - from melting magnesium chloride in an electrolyte to scooping up the melt of finished magnesium.

Обозреватель рынка стали и цветных металлов. Пишу аналитические обзоры рынка для Металлургпром. More news and analytics on Metallurgprom telegram channel - subscribe to get up-to-date market information and price forecasts faster than others.
Сomments
Add a comment
Сomments (0)
On this topic
Coal is a new hope: scientists have succeeded in turning fossil fuels into anode-grade graphite
An economical way of producing metal powders will simplify the 3D printing of aircraft parts
Copper could be the key to converting CO2 back to fuel
Spee3D causes the copper on various surfaces, creating an anti-virus coating
Virgin Galactic has signed an agreement with NASA on the delivery of the ISS commercial passengers
Turkey successfully tests a rocket engine for a flight to the Moon (Video)
Recommended:
The largest steel company in Austria announced its readiness to stop gas supplies from Russia
Bulgaria began unloading the first tanker with American liquefied gas
Russian lead production plants are on the verge of closing due to a complete halt in exports
News Analytics
The United States refused to impose duties on Russian metals and increase02-07-2022, 09:05
Daimler Truck began testing Actros tractor on liquid hydrogen02-07-2022, 08:54
Volvo invests $1.25 billion to build electric vehicle plant in Slovakia01-07-2022, 18:17
Swedish court authorizes construction of steel mill for the first time in 5001-07-2022, 11:09
AvtoVAZ plans to produce at least 400,000 vehicles in 202301-07-2022, 11:29
High iron ore shortage could halt metallurgy's green transition28-06-2022, 14:02
Price volatility hits global steel market27-06-2022, 19:28
Recovery in China could be key to rising global steel prices - MEPS24-06-2022, 14:00
Conflict in Ukraine spurs Europe's drive for clean energy03-06-2022, 12:14
US steel market sentiment becomes more price neutral05-05-2022, 10:15
Sign in with: