“The government is currently working hard to attract investment to Indonesia,” said the country's industry minister during a protest. 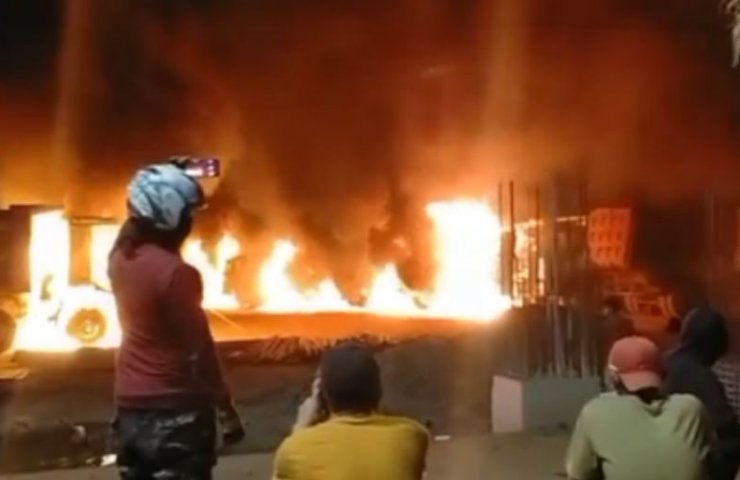 The billion dollar nickel refinery located in Konawa, southeastern Indonesia, began operations in February last year with a theoretical capacity of 800,000 tonnes of ore to produce nickel pig iron with a nickel grade between 10% and 12%.

As a result of a protest, during which 800 workers demanded higher wages on Monday, protesters burned 40 cars and some production and administrative buildings of the plant.

“The turmoil left the company paralyzed as the plant's auxiliary equipment was badly damaged,” said PT VDNI, a subsidiary of China's Jiangsu Delong Nickel Industry, in a statement.

According to Ferri Valintukan, a police spokesman for Southeast Sulawesi, there were no casualties during the protest, five protesters were arrested.

“The government asks all parties ... not to aggravate the situation in order to maintain a cool investment climate in Konawe Regency,” said Industry Minister Agus Gumivang Kartasasmita.

Nickel prices on the Shanghai Futures Exchange fell from a 14-month high of 134,180 yuan a tonne reached earlier in the session, driven in part by supply concerns over the unrest at the plant, and fell 1.4% to 129,370 yuan per ton by closing Wednesday.

Indonesia was the largest exporter of nickel ore until it stopped exporting in January in an effort to attract foreign investment to develop its nickel processing industry.

Recommended:
Gazprom starts gas supplies to Serbia and Bosnia via the Turkish Stream pipeline
Naftogaz launches first tight gas field in Svyatogorsk
Interpipe attracted a 37 million euro loan from Ukrgasbank
On this topic
Shanghai authorities will help Tesla to resume production of cars in the epidemic of the coronavirus
China can greatly reduce production of stainless steel, having transferred power to Indonesia
Norilsk Nickel increased its quarterly production of palladium and platinum
Nippon Steel's Kimitsu plant will be closed until the end of December
India considers liquidation of the Ministry of Steel
China's Tangshan imposes 50 percent restrictions on steel production
Add a comment
Сomments (0)
News Analytics
Auto giants FAW and Audi launch joint EV project in China19-01-2021, 11:14
Germany suspended construction permit for Nord Stream 219-01-2021, 11:57
Interpipe Steel: green metallurgy in Ukraine turns 9 years old18-01-2021, 15:28
Ukrmetallurgprom clarifies data on iron and steel smelting in Ukraine for 202018-01-2021, 12:50
At least 12 living miners remain under the rubble of a mine blown up on January18-01-2021, 11:47
China will overtake the United States to become the world's largest economy in27-12-2020, 12:04
The shortage in the US steel market will last at least until the end of the25-12-2020, 11:36
Steel production in China to surpass one billion tons this year23-12-2020, 10:59
Iron ore prices hit seven-year high and continue to rise15-12-2020, 10:26
Prices for metallurgical raw materials continue to rise in regional markets10-12-2020, 11:32
Sign in with: