Workers, civil society and political parties in Vishakhapatnam are gripped by protests against the privatization of a metallurgical plant built by the Soviet Union in the 1980s. 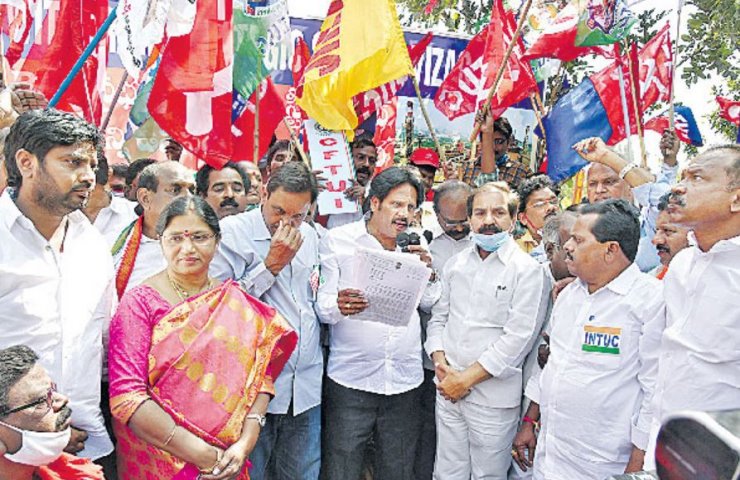 In India, mass protests began against the privatization of a metallurgical plant in Visakhapatnam. Factory workers and members of the local trade union took to the streets to protest against the government's decision.

On Wednesday, the Indian government announced a 100% strategic divestiture in a steel plant that employs about 65,000 workers.

“This is the worst decision made by the Modi government. Making a 100% strategic sale of a steel mill is not good. Andhra Pradesh has developed thanks to the Visakhapatnam Steel plant, ”said Narsing Rao, leader of the Communist Party of India (KPI) at the protest.

“Responsibility for the suspension of the privatization of the metallurgical plant lies with the Chief Minister. Political divisions aside, intellectuals, trade unions and political parties must unite and fight against privatization. They must be prepared to submit their resignation if necessary and be prepared for any sacrifice. If the protest happens on such a large scale, then I am confident that we will be able to slow down the privatization process, ”said senior local government official Ganta Srinivasa Rao.

He said that the government's decision under the leadership of Narendra Modi to privatize the steel plant shocked not only the residents of Visakhapatnam, but also all Telugu (the main population of Andhra Pradesh). “It is regrettable to see the government privatize a steel plant, citing minor losses,” Ganta said.

Recommended:
The State Space Agency and the Cadastral Service of Ukraine agreed on cooperation
DTEK Energy plans to allocate UAH 2.3 billion for repairs of thermal power plants in 2021
ArcelorMittal Temirtau drone army replenished with three more fighters
On this topic
Indonesian protesters burned down factory demanding wage increases
India will make a third attempt to land on the moon
The demand for steel in India is growing with the growth of public expenditure
The members of the Majlis of Iran resigned after a rise in gasoline prices
The leader of Iran has accused the enemies of the Republic in protest against rising gasoline prices
American security expert named the main problem in Korean metallurgy
Add a comment
Сomments (0)
News Analytics
В Иране удовлетворены реакцией мирового сообщества на 60-процентное обогащение18-04-2021, 13:24
Gas prices in Ukraine have reached a record value over the past two years -16-04-2021, 17:24
Ukrmetallurgprom asks the Antimonopoly Committee to allow Metinvest to bid for16-04-2021, 17:23
A fatal accident occurred on the territory of the Dnieper Metallurgical Plant16-04-2021, 13:01
Cars built for Euro 2012 will be repaired at the Kryukov Carriage Works16-04-2021, 12:46
World Steel Association predicts a good year for metallurgists15-04-2021, 18:19
World Steel Association defines green steel and its variations12-04-2021, 13:14
China unlikely to cut steel capacity in 2021 due to high steel prices07-04-2021, 12:11
Scrap metal market at the beginning of April02-04-2021, 11:10
Rising Chinese Prices Fueled Rising Global Steel Prices - MEPS25-03-2021, 18:54
Sign in with: