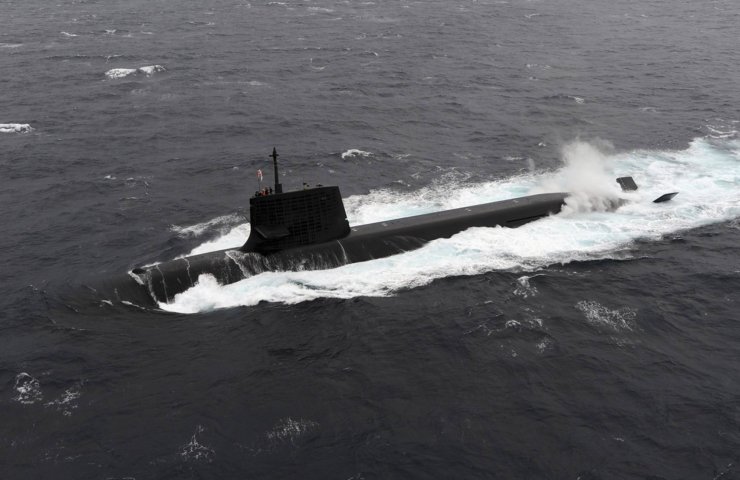 Chief Cabinet Secretary Katsunobu Kato confirmed that a Japanese Shoryu-class submarine collided with a private ship off the coast of Ashizurimisaki, Kochi Prefecture, shortly before 11 a.m.

He announced that the Japanese government has set up a coordination office at the Crisis Management Center of the Prime Minister's Office in response to this news and is in the process of gathering information.

No casualties were reported on the merchant ship, but a government official said the ship told the Japanese Coast Guard that it did not feel any contact with the submarine and did not notice any damage to its hull.

A Shoryu-class submarine is a diesel-electric attack submarine. The first boat in its class entered service with the Japan Self-Defense Forces in 2009.

Recommended:
Kherson shipyard accepted for modernization two dry cargo vessels of the Dutch EEMS Werken
Shooting of a French film with the tentative title "Earth" has begun at Severny GOK in Ukraine
You can now buy Tesla with Bitcoin - Elon Musk
On this topic
Iran detains Korean tanker carrying 7,200 tons of ethyl alcohol
36 people were killed at a construction site in Cambodia after the contractor saved on the valve
Eyewitnesses reported details of the deadly plane crash in Kazakhstan
China has commissioned a second aircraft carrier and is preparing to launch the third
Japan and South Korea fell out completely
China Trade Conflict Reflects Asian Stainless Steel Market
Add a comment
Сomments (0)
News Analytics
The capacity of the domestic steel market in Ukraine in January-March decreased19-04-2021, 10:33
In Russia, there is an exuberant demand for agricultural machinery19-04-2021, 10:24
Iran is satisfied with the reaction of the world community to 60% enrichment of18-04-2021, 13:24
Gas prices in Ukraine have reached a record value over the past two years -16-04-2021, 17:24
Ukrmetallurgprom asks the Antimonopoly Committee to allow Metinvest to bid for16-04-2021, 17:23
World Steel Association predicts a good year for metallurgists15-04-2021, 18:19
World Steel Association defines green steel and its variations12-04-2021, 13:14
China unlikely to cut steel capacity in 2021 due to high steel prices07-04-2021, 12:11
Scrap metal market at the beginning of April02-04-2021, 11:10
Rising Chinese Prices Fueled Rising Global Steel Prices - MEPS25-03-2021, 18:54
Sign in with: