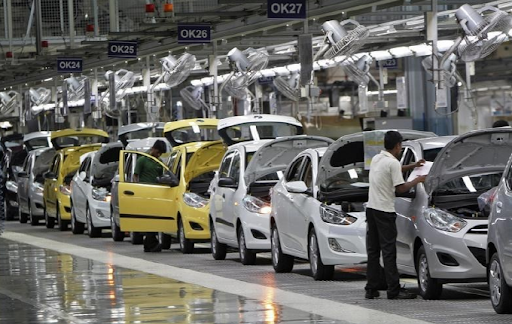 South Korea's Hyundai Motor Co said Tuesday it will suspend production at its # 1 plant in Ulsan, South Korea from April 7-14 due to a shortage of semiconductor chips and supply problems for electrical components.

The company said it had problems supplying semiconductor parts for the front camera system of its Kona SUV and the power electrical modules for the IONIQ 5.

Recall that a fire at a Renesas chip manufacturing plant in Hitachin-Naka, Japan in mid-March caused more damage than was originally anticipated. A spokeswoman for a Japanese semiconductor manufacturer told Reuters that it will take at least a month to resume production.

At the same time, Samsung Electronics announced that production at its Austin, Texas-based chip factory has returned to near-normal levels as of last week. Samsung and other chipmakers with manufacturing facilities in the area were halted due to an abnormal cold in mid-February.

A shortage of microcircuits has already forced the largest car manufacturers around the world to shut down production lines. According to analysts, such shutdowns do not yet affect steel purchases, as automakers prefer to build under-equipped cars and leave them in the warehouse pending the resolution of the chip issues.

Recommended:
Export of scrap threatens the national security of Ukraine - opinion of the people's deputy
Installation of the first giant battery in Ukraine is being completed at Zaporizhzhya TES
Donbasenergo offers a number of measures to overcome the systemic problems of the Ukrainian energy market
On this topic
Chip shortage for auto industry will rise sharply due to fire at factory in Japan
Hyundai to replace batteries in 82,000 Kona and Ioniq electric vehicles due to spontaneous
Korean auto makers will switch to hydrogen engines with help from Chinese steelmakers
Samsung closes its last facility in China
The South Korean Prosecutor's office demands to arrest the Vice-President of Samsung Group
Taiwanese chipmaker TSMC brings production in the United States
Add a comment
Сomments (0)
News Analytics
Iran is satisfied with the reaction of the world community to 60% enrichment of18-04-2021, 13:24
Gas prices in Ukraine have reached a record value over the past two years -16-04-2021, 17:24
Ukrmetallurgprom asks the Antimonopoly Committee to allow Metinvest to bid for16-04-2021, 17:23
A fatal accident occurred on the territory of the Dnieper Metallurgical Plant16-04-2021, 13:01
Cars built for Euro 2012 will be repaired at the Kryukov Carriage Works16-04-2021, 12:46
World Steel Association predicts a good year for metallurgists15-04-2021, 18:19
World Steel Association defines green steel and its variations12-04-2021, 13:14
China unlikely to cut steel capacity in 2021 due to high steel prices07-04-2021, 12:11
Scrap metal market at the beginning of April02-04-2021, 11:10
Rising Chinese Prices Fueled Rising Global Steel Prices - MEPS25-03-2021, 18:54
Sign in with: