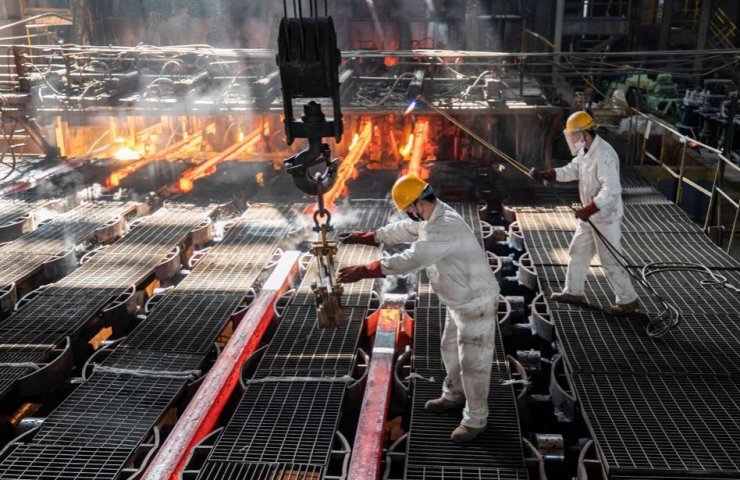 China's steel exports rose 22.5% in June from May to 6.46 million tonnes and 74.6% from a year earlier, even after the government lifted exemptions on export taxes. Nevertheless, this is half the record indicators of the end of 2015.

Steel prices in China began to decline rapidly in the second half of May after Beijing began applying market regulation to stabilize prices. But world steel prices remained unchanged.

“Steel exports this year are likely to exceed 60 million tonnes, as prices in China have been competitive with other countries, and export orders from the mills remain at a satisfactory level,” Argus quotes an exporter from northern China. >

In the first half of 2021, China's total exports grew 28.1% year-on-year to reach 9.85 trillion yuan. According to the General Administration of Customs of the PRC, the volume of China's foreign trade from January to June 2021 increased by 22.8% compared to the same period in 2019.

According to official statistics, the Chinese economy has successfully overcome the consequences of the coronavirus pandemic. In the first quarter, economic growth was a record 18.3% compared to the same period in 2020. The Chinese authorities expect that by the end of 2021, the growth rate of the country's economy will exceed 6 percent.

Финансовая аналитика, прогнозы цен на сталь, железную руду, уголь и другие сырьевые товары. More news and analytics on Metallurgprom telegram channel - subscribe to get up-to-date market information and price forecasts faster than others.
Сomments
Add a comment
Сomments (0)
On this topic
Steel production at record levels. What's next?
China's steel sector can only rely on the real estate sector
China's steel production growth surprised analysts
Platts: Real steel demand in China will fall by 36% in the first quarter
Steel exports from China in November increased compared to October and will continue to grow in
China increased export duties on rolled metal and zeroed import duties on raw materials
Recommended:
Naftogaz launches new arbitration against Gazprom
Minister of Energy of Kazakhstan visited ArcelorMittal Temirtau
Russia may increase taxation of oil, gas, coal and fertilizers
News Analytics
The production of passenger cars in Russia decreased by 2.8 times in eight29-09-2022, 11:19
Donetsk and Torez electrotechnical plants will start producing electrical29-09-2022, 11:37
Ukrainian coking plants reduced gross coke production by 55.2%29-09-2022, 11:28
China ramps up investment in transport to bolster economy29-09-2022, 11:33
The heads of mining companies named the main risks for business29-09-2022, 10:03
China production cuts in winter will give limited boost to steel markets -15-09-2022, 10:09
Steel prices may rise as manufacturers stop production11-09-2022, 14:06
IREPAS: The global long products market is in a "dramatic situation"10-09-2022, 20:49
Steel prices are unlikely to rise significantly in the near future - analysts02-09-2022, 22:58
Steel prices may move up on new data from China31-08-2022, 12:19
Sign in with: