German metallurgists will receive a lump sum of 500 euros

IG Metall planned to get the owners of the metal business in Germany to raise wages by 4%, but agreed on lump sum payments. 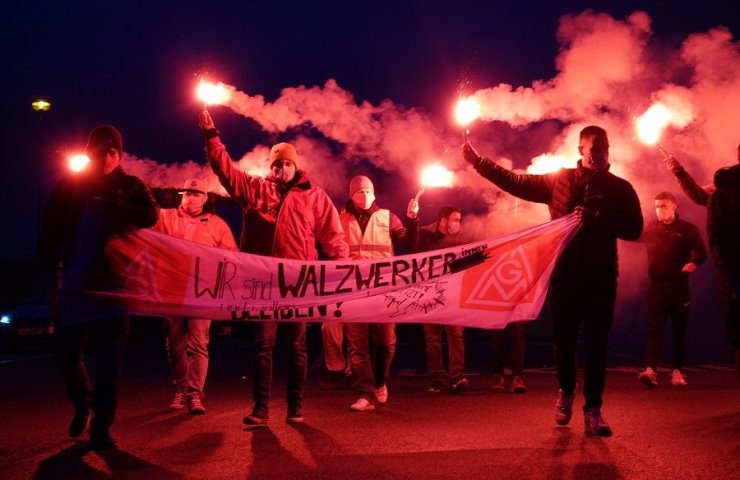 Under the 15-month agreement, which was concluded after seven hours of negotiation, each worker will receive a one-time payment of € 250 on December 28 this year and February 28, 2022.

From February 28, 2023, metallurgists will receive an additional payment of 600 euros per year. The parties also agreed on a one-time coronavirus benefit of 500 euros, which should be paid by the end of June.

The union initially demanded a 4% wage increase for the metallurgists Thyssenkrupp and Salzgitter.

During the biggest economic crisis of the post-war period, the collective bargaining partners in the steel industry found a responsible and fair compromise, ”said Knut Giesler, head of IG Metall in North Rhine-Westphalia.

The parties also agreed to develop a collective bargaining agreement framework for the transition to CO-neutral steel production 2 .

In order to force the employer to make concessions, workers of metallurgical enterprises held warning strikes. Metallurgists from more than 34 companies took part in car parades and other events in Berlin, Brandenburg am Havel, Hennigsdorf and Ludwigsfeld. Numerous campaigns also took place on Tuesday in North Rhine-Westphalia - the largest in Duisburg. There, 1,300 employees demonstrated in front of MSV Stadium in a car cinema.

Recall that the Dutch mining and metallurgical holding Metinvest B.V. billionaires Rinat Akhmetov and Vadim Novinsky announced in Friday on the increase in wages of employees of the Ukrainian factories of the company without any strike action by the trade unions.

Recommended:
A new world record for unbending horseshoes has been set in Kazakhstan
The metallurgical plant of Alexander Yaroslavsky is carrying out the reconstruction of coke oven batteries
Ferrexpo board of directors proposes to quadruple dividends for 2020
On this topic
Thyssenkrupp says it will cost too much to support the German government
Sanjiv Gupta one of these days will find out all the financial secrets of the largest German steel
British billionaire Sanjeev Gupta raises the stakes in race for Thyssenkrupp Steel assets
Thyssenkrupp will lay off 11,000 people to stop losses rising to 1.6 billion euros
ThyssenKrupp sold its Elevator business dropped 17.2 billion euros
The Swiss manufacturer of elevators challenged the sale of Elevator division Thyssenkrupp
Add a comment
Сomments (0)
News Analytics
The capacity of the domestic steel market in Ukraine in January-March decreased19-04-2021, 10:33
In Russia, there is an exuberant demand for agricultural machinery19-04-2021, 10:24
Iran is satisfied with the reaction of the world community to 60% enrichment of18-04-2021, 13:24
Gas prices in Ukraine have reached a record value over the past two years -16-04-2021, 17:24
Ukrmetallurgprom asks the Antimonopoly Committee to allow Metinvest to bid for16-04-2021, 17:23
World Steel Association predicts a good year for metallurgists15-04-2021, 18:19
World Steel Association defines green steel and its variations12-04-2021, 13:14
China unlikely to cut steel capacity in 2021 due to high steel prices07-04-2021, 12:11
Scrap metal market at the beginning of April02-04-2021, 11:10
Rising Chinese Prices Fueled Rising Global Steel Prices - MEPS25-03-2021, 18:54
Sign in with: