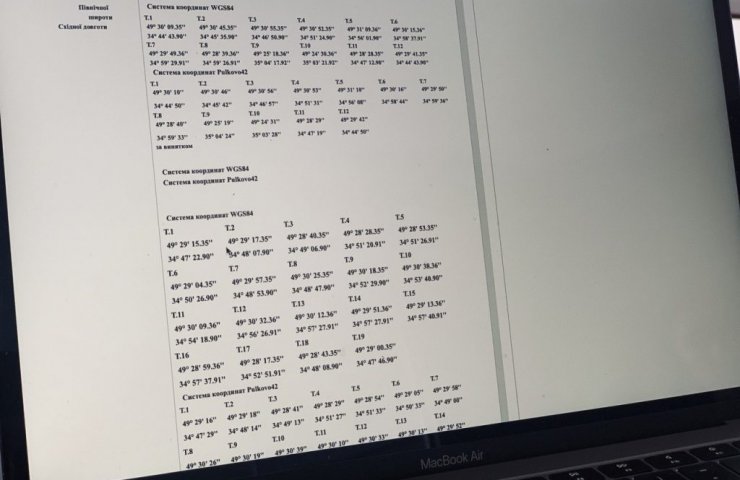 Executing decisions a meeting of the board of the State Service of Geology and Subsoil of Ukraine dated December 11, 2020 GNPP "Geoinform of Ukraine" made an iterative recalculation of the corner points of subsoil plots for the provided special permits in the WGS-84 coordinate system (World Geodetic System 1984 ). Licenses with translated coordinates were placed in the database of special permits maintained by the company.

“We performed the recalculation using the licensed ArcGis software package, using the method described in the instructions for recalculating geographic coordinates in materials and documents of the geological industry between the Pulkovo42 and WGS84 coordinate systems,” said Sergei Primushko, director of the Geoinform State Scientific and Production Enterprise. He said that now in the database of special permits, the coordinates of the sites are located in two systems Pulkovo42 and WGS84 which will be used in parallel during the transition period (2 years).

Soon GNPP "Geoinform of Ukraine" will recalculate the coordinates of the water intake facilities specified in the special permits and publish them on the website. The procedure for making changes and specifying coordinates is the same as described above.

“The 1984 World Geodetic Coordinate System is the most convenient for use, because using only an ordinary smartphone, you can determine the corner points of a subsoil plot that interests you and begin the procedure for nominating it for an auction. In addition, the accuracy of such a system is much higher than the current Pulkovo 42, ”commented Roman Opimakh, Chairman of the State Geological Survey.

Recommended:
ArcelorMittal Raises Hot Rolled Steel Prices in Europe Above € 1,000 /Ton
Net profit of Ukrhydroenergo in 2020 amounted to more than 4 billion hryvnia
Copper price rises to a record high
On this topic
Gosgeonedra drew attention to the protests of Mariupol residents against zirconium mining
Gosgeonedra of Ukraine is moving to the world geodetic coordinate system WGS-84
Why will beryllium become one of the most demanded metals of the XXI century?
Steel production in September 2020
Global steel production in June 2020 decreased by 7%
The state service of Geology and mineral resources of Ukraine presented the Atlas of the investor
Add a comment
Сomments (0)
News Analytics
China's Non-Ferrous Metals Sector Records High First Quarter Profits08-05-2021, 15:43
Copper price rises to a record high08-05-2021, 10:17
Dneprotyazhmash manufactures technological equipment for DMK07-05-2021, 10:07
The National Bank of Ukraine will sell 46 tons of scrap metal from obsolete07-05-2021, 10:10
Dnieper Metallurgical Plant DCH Steel in April reduced steel production by 2.8%07-05-2021, 09:18
The current state of the market is ideal for the sale of rolled steel - IREPAS04-05-2021, 18:41
Global hydrogen demand to grow 7-fold by 2070 - PwC21-04-2021, 12:31
World Steel Association predicts a good year for metallurgists15-04-2021, 18:19
World Steel Association defines green steel and its variations12-04-2021, 13:14
China unlikely to cut steel capacity in 2021 due to high steel prices07-04-2021, 12:11
Sign in with: