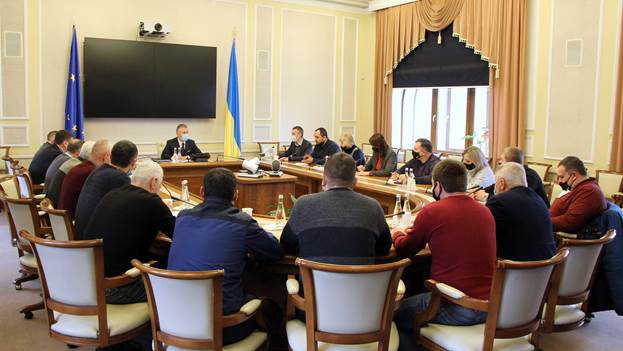 Acting Minister of Energy of Ukraine Yuriy Vitrenko met with representatives of the Lviv territorial organization of the coal industry workers' trade union, the Regional Association of the Independent Trade Union of Miners of Ukraine in Chervonograd, Lviv region.

The meeting was attended by Deputy Minister Alexander Zorin, Director of the Department of the Coal Industry Complex Andrey Sinyuk and representative of PJSC "Centrenergo" Vitaly Dovgal.

Yuriy Vitrenko said that now the issue of accelerating payments from the State budget is being resolved so that miners receive the money they earn. There are also agreements with the State Property Fund to assist in paying off debts to miners.

He also informed the audience about the withdrawal of the previously adopted concept of reforming the coal industry in Ukraine.

“We have withdrawn the concept that we had prepared earlier to make sure that we will really make an efficient vertically integrated company based on Centrenergo. We are ready to fully assist if the newly formed company really works like a clock and pays money on time, ”the head of the Ministry of Energy said.

The head of the Ministry of Energy informed about the intentions to transform coal regions, in particular about cooperation in this direction with German partners, and investments in those enterprises that have exhausted their resources. In their place in the process of transformation, it is planned to create new enterprises with the support of investors.

Alexander Zorin suggested holding a conference call next Monday with the participation of the heads of mines, OJSC "Centrenergo", other enterprises and miners' trade unions in order to discuss and determine ways and terms of debt repayment.

Let us remind you that today in Kiev, protest actions of workers of mining enterprises of the Lviv region, organized with the support of the Independent Trade Union of Miners of Ukraine, took place. The miners demanded that the country's leadership pay off wage arrears to employees of state-owned mines.

Recommended:
Russia has expanded state support for manufacturers of special equipment
The Ministry of Energy of Ukraine proposes to exempt biofuels from environmental tax
The State Service of Geology and Subsoil of Ukraine commented on the sanctions against subsoil users
On this topic
The largest energy company in Ukraine asks the state to intervene in the situation with coal
The Ministry of Energy of Ukraine presented a project for the transformation of the coal industry
Mine "Nadezhda" does not ship previously paid coal - statement of "Centrenergo"
Mine DTEK Dobropolyeugol out of idle due to the contract for the supply of coal with Centrenergo
Stopped nuclear power plants and mines. What's going on in the energy sector of Ukraine?
Relentless degradation of the coal industry. Close Ukrainian mines?
Add a comment
Сomments (0)
News Analytics
The capacity of the domestic steel market in Ukraine in January-March decreased19-04-2021, 10:33
In Russia, there is an exuberant demand for agricultural machinery19-04-2021, 10:24
Iran is satisfied with the reaction of the world community to 60% enrichment of18-04-2021, 13:24
Gas prices in Ukraine have reached a record value over the past two years -16-04-2021, 17:24
Ukrmetallurgprom asks the Antimonopoly Committee to allow Metinvest to bid for16-04-2021, 17:23
World Steel Association predicts a good year for metallurgists15-04-2021, 18:19
World Steel Association defines green steel and its variations12-04-2021, 13:14
China unlikely to cut steel capacity in 2021 due to high steel prices07-04-2021, 12:11
Scrap metal market at the beginning of April02-04-2021, 11:10
Rising Chinese Prices Fueled Rising Global Steel Prices - MEPS25-03-2021, 18:54
Sign in with: