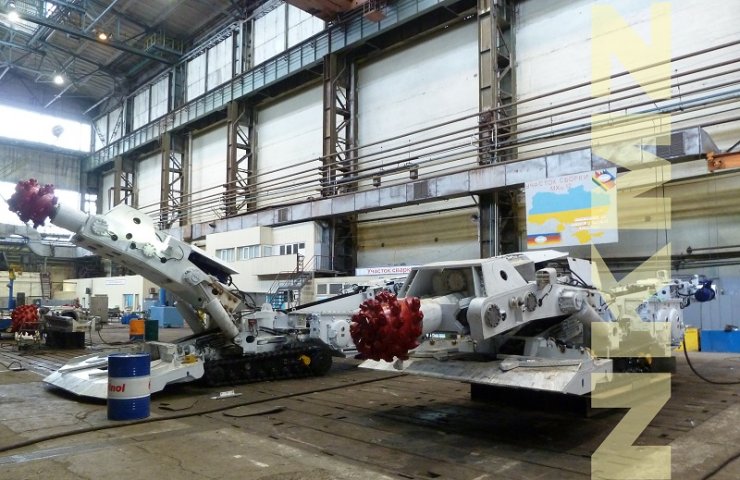 The tunneling equipment of NKMZ was appreciated by the miners of DTEK Pavlogradugol. Since 2017, the Novokramatorsk employees have supplied them with 21 roadheaders of the P110 serial model, which has two transverse cutting crowns. This harvester is highly popular with miners in Ukraine and the CIS countries. It belongs to the lightest series and is used for working faces with rock hardness up to 100 MPa.

Combine P110-03 with a longitudinal-axial cutting bit was designed and manufactured by NKMZ at the request of the miners of PJSC "DTEK Pavlogradugol" especially for local mines with small working sections. It is smaller and can be used in workings with a section of 7-25 m 2 . This harvester differs from the serial P110 by a new executive body, which consists of a longitudinal-axial cutting bit, a spur gearbox and a frame. This body and the executive bodies of other combines of the P110 series are completely interchangeable.

The project of the new combine was developed by the specialists of the bureau of combines and tunneling equipment of the design department of the metallurgical and mine-tunneling equipment division of NKMZ under the leadership of the head of the bureau Evgeny Klimenko. Lead designer of the project - Maxim Churikanov. Combines were manufactured in mechanical assembly shops No. 12, No. 6 and in workshop No. 16.

The range of cooperation between NKMZ and PJSC "DTEK Pavlogradugol" is expanding. Its new direction is the performance of major overhauls by the Novokramatorsk workers of the P110 serial roadheaders that have exhausted their service life, previously supplied to the mines of the joint-stock company. In March, the documentation required for this was released into production.

Recommended:
Russia may face a shortage of metal products due to the restriction of its exports
Tesla doubles quarterly sales of electric vehicles far beyond analyst expectations
Ministry of Economy of Ukraine and ArcelorMittal Kryvyi Rih signed a Memorandum for a billion dollars
On this topic
Novokramatorsk Machine-Building Plant keeps sales and production at the level of 2019
Installation of a spreader made by Ukrainian NKMZ continues in Uzbekistan
At CorumExpo presented the first Ukrainian harvester for coal mining in ultra-thin seams
Novokramatorsky Mashinostroitelny Zavod re-entered the market of coke chemical equipment
DTEK because of the crisis in the energy sector stopped the largest coal producing company in
The Dnieper hydroelectric power station can operate for another 100 years after reconstruction
Add a comment
Сomments (0)
News Analytics
Ukraine and the United States are deepening cooperation in the trade and20-04-2021, 20:46
Nikopol pipe plant "Centravis" is approved as a supplier of the Chinese20-04-2021, 20:10
The capacity of the domestic steel market in Ukraine in January-March decreased19-04-2021, 10:33
In Russia, there is an exuberant demand for agricultural machinery19-04-2021, 10:24
Iran is satisfied with the reaction of the world community to 60% enrichment of18-04-2021, 13:24
World Steel Association predicts a good year for metallurgists15-04-2021, 18:19
World Steel Association defines green steel and its variations12-04-2021, 13:14
China unlikely to cut steel capacity in 2021 due to high steel prices07-04-2021, 12:11
Scrap metal market at the beginning of April02-04-2021, 11:10
Rising Chinese Prices Fueled Rising Global Steel Prices - MEPS25-03-2021, 18:54
Sign in with: