The machine is eagerly awaited by the Ingul mine, which has already carried out preparatory work for the launch of the machine in a real production process. 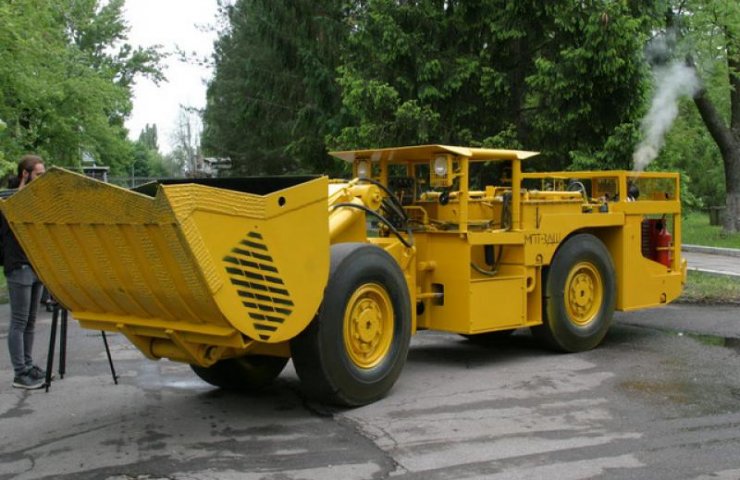 On June 4, on the basis of the mechanical repair plant (RMZ) of SE "VostGOK", a presentation and testing of the MPT-3DSh loading and transport machine, developed and manufactured by a team of plant specialists, took place. The car was presented by the director of the RMZ Igor Sorokin, the head of the design department of the plant Vyacheslav Sergeev.

A mining machine of this class is made to order from the uranium mines of the plant. At the current stage of work at the Ingulskaya, Smolinskaya, Novokonstantinovskaya mines, there is a need for self-propelled equipment of appropriate power, maneuverability, carrying capacity, which is due to the peculiarities of the passage of mine workings. There was also a need to increase the functionality of the mine machine.

Taking into account the technical parameters and tasks of the mines, the mechanical repair plant developed the corresponding design and technological documentation, manufactured all the machine units, carried out assembly, commissioning, and carried out the author's and technical supervision over the work.

The autonomous diesel drive makes the MPT-3DSh more maneuverable than similar machines powered by an electric drive, which significantly affects the increase in labor productivity. It is also an important solution to the issue of providing mines with new equipment, since the cost of this machine is several times lower than imported counterparts.

The presented sample of the MPT-3DSh loading and transporting machine can be used for loading, transporting and performing auxiliary work in underground mines with a width of at least 2400 mm and a height of at least 2250 mm, hazardous in terms of gas and dust. Consists of chassis, hydraulic system, control system and gas cleaning materials, bucket for rock mass transfer. Additional equipment of the machine is also possible, expanding its functionality: a shovel-shovel for picking up rock mass, a dump, a lifting boom with more than a container.

Considering that the MPT-3DSh machine can be used not only at the mines of the SE "VostGOK", but also at other mining enterprises, the presentation was attended not only by representatives of the Ingulskaya, Smolinskoye, Novokonstantinovskaya mines of the plant, but also specialists from Zaporozhye and Krivorozhsky iron ore factories.

Anton Bendikov, acting General Director of SE "VostGOK", thanked the RMZ staff for the fruitful and hard work on the creation of a modern loading and transport machine, which became a kind of gift for the 70th anniversary of the plant, which will be celebrated in August this year.