This is how the plant's ecologists fight dust. In addition to rye, places with metallurgical waste are sown with rapeseed and wild-growing herbs, which not only restrain dusting, but also improve the aesthetic appearance of disturbed lands. 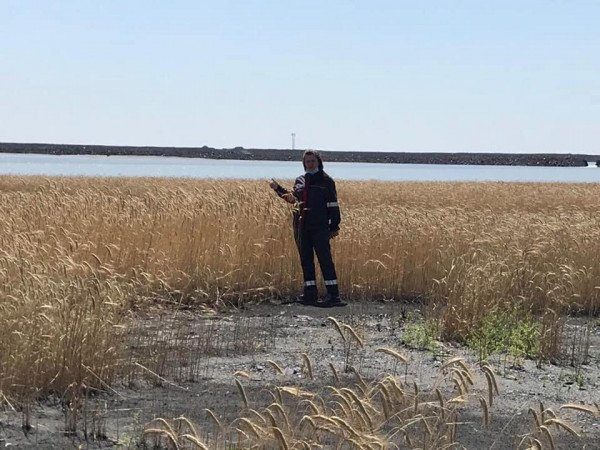 To combat dust formation at the tailings and dumps of the Ingulets Mining and Processing Plant (INGOK), rye has been sown since last year. Today, rye grows and spikes abundantly there, and its ramified root system forms a solid barrier to spraying the topsoil.

The plant's ecologists note that the cereal plants have taken root well in the conditions of the tailing dump. Last year rye was sown on 6 hectares, this year - 7.5 hectares.

A similar "green" technique is used on the slopes of dumps. They are sown with rapeseed and wild-growing herbs. Since it is impossible to work with seeders and tractors on slopes, the mixture of seeds and nutrients is applied using a water jet.

“We consider biological reclamation projects to be promising and effective. They are aimed at reducing the technogenic load on the environment. Firstly, plants significantly restrain the amount of dust, and secondly, they improve the aesthetic appearance of disturbed lands, ”says Evgeny Bokhonsky, head of the environmental protection department of Inguletsky GOK of Metinvest.

To improve the environmental situation, young trees are planted annually in the area of ​​the Ingulets housing estate and surrounding villages on the initiative of INGOK. This year, twenty fir trees and two hundred ash trees have been planted on the residential area, and last year, thanks to the plant, five and a half thousand trees were greened.

Recommended:
Ukrpromvneshekspertiza predicts a decline in scrap prices in Ukraine this week
Novokramatorsk Machine-Building Plant built and tested two new straightening-pulling machines
Belarus limits the export of steel pipes to the European Union for six months
On this topic
Severny GOK implements a set of measures for dust suppression at the tailing dump
State Environmental Inspection in Court Demands to Stop Construction of New Tailings Dump at
Metinvest invested UAH 2.6 billion in environmental projects of Ingulets GOK
Central GOK of Metinvest will produce less dust thanks to sowing of rye and reed
Metinvest: the Enterprise became a victim of circumstances, but it remains a good taxpayer
Metinvest trains drivers of IngoK dump trucks in Spain
Partner news
Сomments
Add a comment
Сomments (0)
News Analytics
State Environmental Inspection filed claims against ArcelorMittal Kryvyi Rih in17-09-2021, 10:28
US Steel will build an electrometallurgical plant with a capacity of 3 million17-09-2021, 10:48
Airbus begins designing a hydrogen-powered aircraft17-09-2021, 10:06
There are already 779 enterprises in Ukraine that officially carry out17-09-2021, 09:16
Low-cost carrier Ryanair plans aggressive expansion in Ukraine16-09-2021, 21:34
Moody's changes its outlook for the mining and metals industry from "positive"14-09-2021, 18:39
European steel prices decline from summer highs and remain stable high04-09-2021, 10:38
Rise in European steel prices to dizzying levels finally fizzled out - Bloomberg27-08-2021, 13:18
Gold continues to be the most efficient portfolio asset - WGC26-08-2021, 12:38
Falling iron ore prices caught Wall Street by surprise - WSJ23-08-2021, 13:57
Sign in with: