The Syrian Girls and Women Center has created hobby classes, including design courses and robotics training. 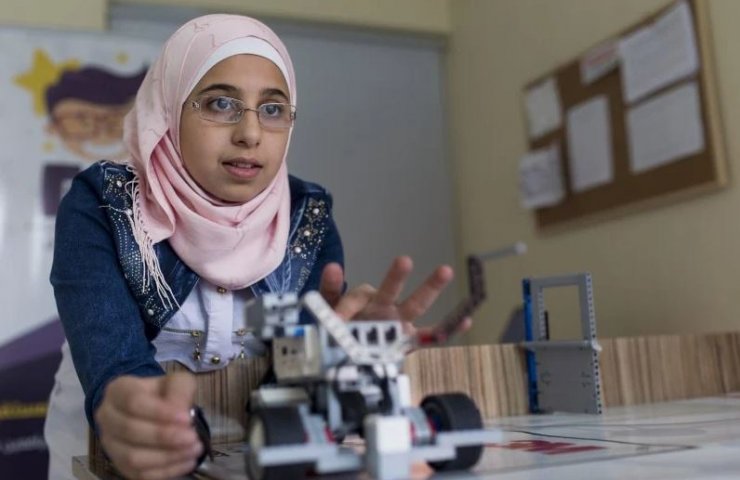 The robotics courses, organized at UNFPA centers in northwest Syria, were attended by 659 female residents aged 10 to 16. Education in these classes, experts say, not only allows girls to gain knowledge of mechanics and programming, it develops creativity, teamwork skills, the ability to make decisions and think critically, and also strengthens their self-confidence.

Unlike many other programs, where women are mainly taught to cook, sew or do hair, there are design classes here, thanks to which women discover new abilities.

Of the 4.2 million inhabitants of this part of Syria, more than half are internally displaced persons, and 3.5 million are in need of humanitarian assistance. The pandemic brought additional difficulties and further complicated life in northwestern Syria - schools were closed, it became more difficult to obtain medical and humanitarian assistance.

Girls are one of the most vulnerable groups in the population. “They are affected primarily by the crisis in Syria and are often victims of gender-based violence,” says Rim Khamis, a staff member of the United Nations Population Fund (UNFPA). The local office of the organization is located on the other side of the border, in Turkey, but the main work is here, in the border regions of Syria.

Recommended:
ArcelorMittal Kryvyi Rih is not ready to increase salaries of employees by 30%
IMF Raises Global Growth Forecast To 5.5% Amid High Uncertainty
VostGOK presented a program for the development of the nuclear industry to the Public Council under the Ministry of Energy of Ukraine
On this topic
Karl Sturen: benefits for "green" electrometallurgy threaten Ukraine's energy security
Steel suit: from knightly armor to smart workwear
Blast furnace tragedy. Black page of the history of the Dnieper steel plant
Where to order a selling text on a website in 2020
Yuzhmash told whether it is possible to launch reusable rockets from the Black Sea
Steel Musel is crucial in the production of champagne
Add a comment
Сomments (0)
News Analytics
Iran is satisfied with the reaction of the world community to 60% enrichment of18-04-2021, 13:24
Gas prices in Ukraine have reached a record value over the past two years -16-04-2021, 17:24
Ukrmetallurgprom asks the Antimonopoly Committee to allow Metinvest to bid for16-04-2021, 17:23
A fatal accident occurred on the territory of the Dnieper Metallurgical Plant16-04-2021, 13:01
Cars built for Euro 2012 will be repaired at the Kryukov Carriage Works16-04-2021, 12:46
World Steel Association predicts a good year for metallurgists15-04-2021, 18:19
World Steel Association defines green steel and its variations12-04-2021, 13:14
China unlikely to cut steel capacity in 2021 due to high steel prices07-04-2021, 12:11
Scrap metal market at the beginning of April02-04-2021, 11:10
Rising Chinese Prices Fueled Rising Global Steel Prices - MEPS25-03-2021, 18:54
Sign in with: