Trucker protests against quarantine measures in Canada out of control

In Canada, an indefinite action of truckers "Convoy of Freedom" is taking place. Ottawa is "losing this battle" and the city is "completely out of control," said Mayor Jim Watson of Canada's capital. 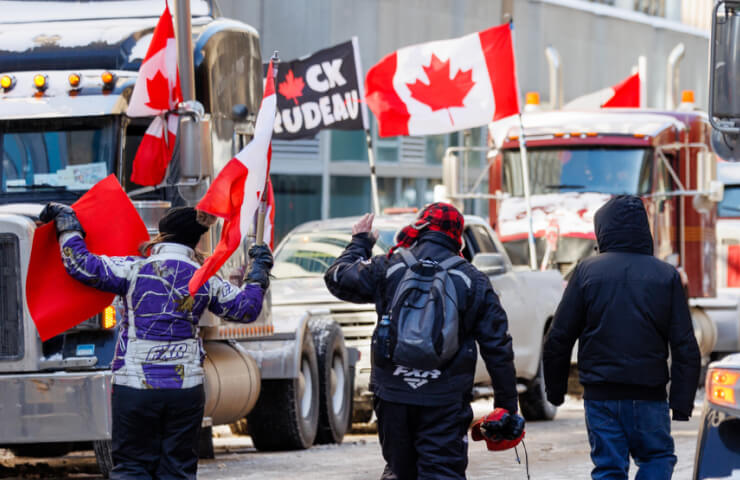 The mayor of Ottawa, Canada, Jim Watson, declared a state of emergency as the situation, in his opinion, "grew out of control" after a week of protests by truckers against coronavirus restrictions. He added that the protests pose a threat to the safety of residents.

The City is advising residents that traffic and service issues will continue on Monday, February 7th. Residents are advised to avoid unnecessary travel to or around the city center.

To date, more than 60 criminal cases have been filed by Canadian police in connection with the protests, involving mischief, theft, hate crimes and property damage. 10 protesters were arrested and taken into custody.

The rally, dubbed "Freedom Convoy", was prompted last month by the introduction of a new rule requiring all truckers to be vaccinated to cross the US-Canada border, but the protests have morphed into broader protests over restrictions on freedom of movement.

The demonstrators demand that the federal and regional authorities lift all restrictions related to the pandemic. On January 29, Prime Minister Justin Trudeau and his family left the capital's residence for security reasons. He stated that he did not intend to enter into negotiations with the "marginal minority".

Covid-19 vaccines have reduced the risk of severe illness in those infected with the virus, and serious side effects are extremely rare. Over 80% of the Canadian population is fully vaccinated, and a recent poll found that a majority of Canadians are in favor of more restrictions on the unvaccinated.

Финансовая аналитика, прогнозы цен на сталь, железную руду, уголь и другие сырьевые товары. More news and analytics on Metallurgprom telegram channel - subscribe to get up-to-date market information and price forecasts faster than others.
Сomments
Add a comment
Сomments (0)
On this topic
The Government of Canada advised its citizens to refrain from traveling to Ukraine
Canada has promised to urgently ratify the USMCA agreement
Abnormal heat in Canada leads to the suspension of uranium mining at a mine in Saskatchewan
US imposed new duties on steel from Mexico and China
Two Russian citizens can be jailed in the US for 20 years for trying to buy turbine, the Vectra 40G
Canada will not ratify new agreement with US until steel tariffs are lifted
Recommended:
Chinese automaker Chery reports strong growth in NEV sales in first 4 months of 2022
Ukraine and Great Britain signed an agreement on the abolition of import duties and tariff quotas
Canada will cancel all import duties for goods from Ukraine
News Analytics
The largest producer of titanium raw materials in Ukraine OGCC will sell25-05-2022, 20:48
Glencore accused of bribery in London pleads guilty in the US25-05-2022, 10:44
Swiss oil and gas equipment manufacturer Sulzer leaves Russia24-05-2022, 13:08
BIR: European Commission's decision on scrap metal will be the most tragic24-05-2022, 11:41
Rejection of Russian palladium destroys markets24-05-2022, 11:41
US steel market sentiment becomes more price neutral05-05-2022, 10:15
The global high-strength steel market will grow steadily by 5% annually for the04-05-2022, 08:45
China steel inventories hit 13-month high amid COVID-19 outbreak30-04-2022, 16:38
Slowdown in global auto sector affects steel prices27-04-2022, 12:36
World alumina production reaches a record 138 million tons21-04-2022, 09:54
Sign in with: