Canadian scientists have proposed to "collect" CO2 from the atmosphere using railways. wagons 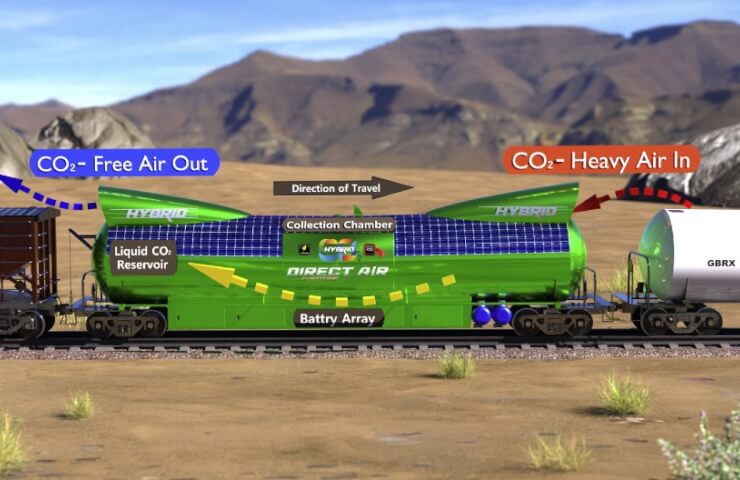 Inventors at the University of Toronto have proposed the use of rail cars to capture and recycle atmospheric CO2 due to the fact that fixed direct air capture plants require large areas of land and the construction of new renewable energy sources.

Obtaining proper operating permits can be difficult, and many residents oppose the construction of these large facilities in their cities. “This is a huge problem because almost everyone wants to overcome the climate crisis, but no one wants to do it at home,” says co-inventor Jeffrey Ozin, a carbon dioxide management chemist and chemical engineer, and director of the solar fuels group. to the University of Toronto. "Direct air capture railcars do not require zoning or building permits, and generally remain out of the public eye."

In purpose-built cars, it is proposed to use large air intake vents, which eliminates the need for energy-intensive fan systems that are used in fixed direct air intake systems. Once sufficient carbon dioxide has been captured, the chamber is closed and the collected carbon dioxide is collected, concentrated and stored in a liquid tank until it is drained from the train into nearby geological storage.

The inventors claim that direct air capture is becoming an even more viable solution for the climate as the rail system already exists. “The infrastructure is there,” says Ozin. “That's the point. All you have to do is take advantage of what is already available.”

Researchers say that an average freight train with these direct air capture cars can remove up to 6,000 tons of carbon dioxide per year. Since its sustainable energy needs are provided by onboard sources, the cost per tonne is significantly lower than other direct air capture systems. “The projected cost to scale is less than $50/tonne, making the technology not only commercially feasible, but also commercially attractive,” says lead author E. Bachmann, founder of CO 2 Rail.

Финансовая аналитика, прогнозы цен на сталь, железную руду, уголь и другие сырьевые товары. More news and analytics on Metallurgprom telegram channel - subscribe to get up-to-date market information and price forecasts faster than others.
Сomments
Add a comment
Сomments (0)
On this topic
"New Hidden World" Discovered in Earth's Inner Core
What technologies help robots to become human?
SpaceX launches program to remove CO2 from the atmosphere to obtain rocket fuel
China is building an "artificial moon" for a gravitational experiment
Where to order a selling text on a website in 2020
SE "Antonov" plans to produce its military transport aircraft An-74 in Canada
Recommended:
The European Commission plans to create a European hydrogen bank with a budget of 3 billion euros
H2 Green Steel has received 190 million euros for the construction of a hydrogen steel plant
Ukraine's foreign exchange earnings from the export of ferrous metals decreased by $4 billion
News Analytics
EBRD downgrades Ukrainian economic growth forecast for 2023 from 25% to 8%28-09-2022, 13:57
EU plans additional sanctions against Russian metallurgy27-09-2022, 10:34
The European Commission has approved 5.2 billion euros of state support for27-09-2022, 10:43
China's leading industrial profits fall 2.1% in first 8 months27-09-2022, 10:20
Moody's changed the outlook for the global mining industry to26-09-2022, 19:04
China production cuts in winter will give limited boost to steel markets -15-09-2022, 10:09
Steel prices may rise as manufacturers stop production11-09-2022, 14:06
IREPAS: The global long products market is in a "dramatic situation"10-09-2022, 20:49
Steel prices are unlikely to rise significantly in the near future - analysts02-09-2022, 22:58
Steel prices may move up on new data from China31-08-2022, 12:19
Sign in with: