According to a company representative, it was decided to postpone the expansion of the plant not because of Western sanctions, but because there was an excess of steel rod on the local market, which is mainly used in the construction of the famous skyscrapers in Dubai. 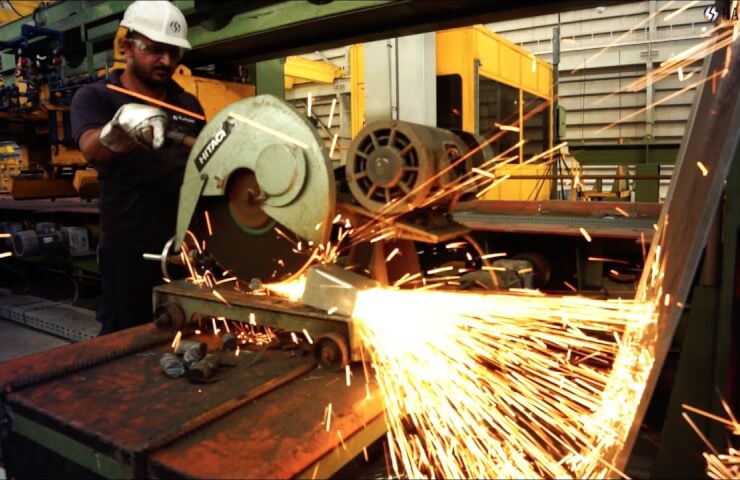 Metalloinvest Mining and Metallurgical Holding of Alisher Usmanov and partners has postponed the expansion of its steel-rolling plant Hamriyah Steel in Sharjah (United Arab Emirates, UAE), Yury Gavrilov, director of the company for strategy, mergers and acquisitions, told RBC.

Earlier in December 2021, Metalloinvest CEO Nazim Efendiev announced that the company would build a steel rod mill at Hamriyah Steel.

Steel rod is rolled metal in the form of a round bar. It is mainly used in construction - for fastening load-bearing structures, reinforcing reinforced concrete, manufacturing fences and nets, increasing the strength of brickwork and arranging grounding systems. Also, wire rod is used to make nails, sewing needles, cables and ropes.

Metalloinvest launched the Hamriyah Steel plant with a capacity of 1 million tons of steel reinforcement per year in 2010. Investments in the project amounted to about 150 million dollars.

Three more plants produce wire rod in the UAE — United Steel Industries with a capacity of 1.1 million tons of rebar and wire rod per year, Qatar Steel Company FZE (280 thousand tons of wire rod) and Emirates Steel (550 thousand tons of wire rod). “Another line for the production of steel rod in the UAE simply does not make sense,” a representative of ME Steel (the largest database and news about the steel market in the Middle East) told RBC. There is already a surplus of such products in this country, so wire rod has to be exported. “It is not so easy for wire rod produced in the UAE to compete in exports with products from China and Turkey, whose suppliers are quite aggressive,” the expert noted.

Финансовая аналитика, прогнозы цен на сталь, железную руду, уголь и другие сырьевые товары. More news and analytics on Metallurgprom telegram channel - subscribe to get up-to-date market information and price forecasts faster than others.
Сomments
Add a comment
Сomments (0)
On this topic
Alisher Usmanov's USM Group will invest 40 billion rubles in a new HBI plant
5 of the 10 most expensive aircraft belongs to the Russian metallurgists
Metalloinvest and UZTM-KARTEX to jointly develop a giant mining excavator with a 30 cubic meter
South Korean DSME to build six LNG carriers for Arctic LNG 2
Closed due to sanctions, the plant "RUSAL" will mine cryptocurrency
Russian metallurgists stop production due to the strengthened ruble
Recommended:
A converter was repaired at Polymetal Production without shutting down production
Novokramatorsky Mashzavod announced the start of the procedure for the "compulsory alienation" of property
Chinese steel mills to suspend several production lines in August
News Analytics
Salzgitter invests 700 million euros in mild steel production13-08-2022, 10:44
Evraz decided to get rid of its assets in the US and Canada13-08-2022, 09:10
S&P and Fitch consider Ukraine's agreement to defer payments on public debt13-08-2022, 09:59
Demand for electric vehicles in Ukraine shows "crazy" growth -13-08-2022, 09:07
Director General of Ukrhydroenergo initiated the construction of new bomb13-08-2022, 09:31
The US market may begin a collapse in prices for thick sheet14-07-2022, 09:39
High iron ore shortage could halt metallurgy's green transition28-06-2022, 14:02
Price volatility hits global steel market27-06-2022, 19:28
Recovery in China could be key to rising global steel prices - MEPS24-06-2022, 14:00
Conflict in Ukraine spurs Europe's drive for clean energy03-06-2022, 12:14
Sign in with: