Uralvagonzavod will change the assortment due to overproduction of open wagons

Uralvagonzavod, the second largest railcar manufacturer in Russia, will increase its annual production of flatcars for container transportation to 5,000-6,000 in the coming years, depending on demand. 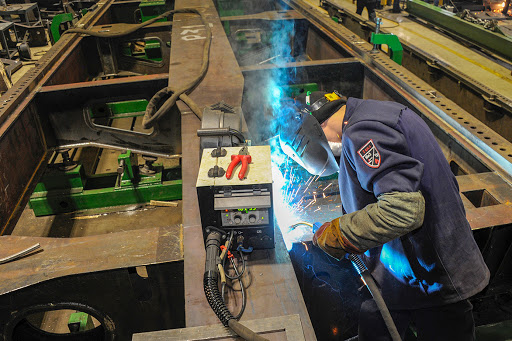 The second largest railcar manufacturer in Russia, Uralvagonzavod (UVZ, part of Rostec), has decided to convert half of its capacity for the production of fitting platforms for containers, Boris Myagkov, advisor to the general director of UVZ, told RBC. He recently returned to the company after working for over a year at United Wagon Company (UWC, market leader).

The decision to re-profile was made for two reasons - the global trend for container transportation and the overproduction of gondola cars in Russia, said Myagkov. He added that there is a "significant preponderance" in the transport of goods in containers. "They even want to transport coal in containers, so we see the prospects for growth in demand for platforms from Russian operators in the coming years," the adviser said.

According to him, now the plant produces "only a few units" of platforms. UVZ will start increasing their production at the end of 2021. The company has seven platform models in its portfolio.

Although UVZ believes that gondola cars will always be in demand, the demand for them is predicted to be lower than their current production. Now the plant's capacity is designed to produce 12,500 gondola cars per year, but the company can sell only 6,000-8,000 of them in any market, since replacing inefficient old-generation cars with innovative ones is inevitable, Myagkov said.

Since the end of 2019, there has been an overproduction of freight cars in Russia, including gondola cars that carry ore, coal and timber. The gondola car fleet has now reached a historic maximum of 526 thousand units. By 2025-2026, it can grow to 650 thousand even with a reduction in production to 10-15 thousand a year, experts predict.

Uralvagonzavod produces a wide range of engineering products, including freight cars and components for them. The company is 100% owned by the state corporation Rostec.

In addition to UVZ, fitting platforms in Russia, in particular, are produced by the Transmash plant (Engels, Saratov region), the asset of Iskandar Makhmudov, Andrei Bokarev, Dmitry Komissarov and Kirill Lipa, which is part of Transmashholding - the latter two are controlling shareholders, 20% owned French concern Alstom.

Recommended:
Copper could be the key to converting CO2 back to fuel
Liberty Steel requests £ 170m emergency aid from UK government
US Treasury Secretary Calls For Minimum Tax Rates For Different Countries
On this topic
Uralvagonzavod will switch to the production of a new generation railway bogie
KVSZ checked its readiness for serial production of new flatcars
Production of wagons in Russia fell by a third
One step away from bankruptcy: car builders demand from the Ukrainian government to take urgent
Uralvagonzavod implement a system to protect the cars from fraud
Closed due to sanctions, the plant "RUSAL" will mine cryptocurrency
Add a comment
Сomments (0)
News Analytics
Iran is satisfied with the reaction of the world community to 60% enrichment of18-04-2021, 13:24
Gas prices in Ukraine have reached a record value over the past two years -16-04-2021, 17:24
Ukrmetallurgprom asks the Antimonopoly Committee to allow Metinvest to bid for16-04-2021, 17:23
A fatal accident occurred on the territory of the Dnieper Metallurgical Plant16-04-2021, 13:01
Cars built for Euro 2012 will be repaired at the Kryukov Carriage Works16-04-2021, 12:46
World Steel Association predicts a good year for metallurgists15-04-2021, 18:19
World Steel Association defines green steel and its variations12-04-2021, 13:14
China unlikely to cut steel capacity in 2021 due to high steel prices07-04-2021, 12:11
Scrap metal market at the beginning of April02-04-2021, 11:10
Rising Chinese Prices Fueled Rising Global Steel Prices - MEPS25-03-2021, 18:54
Sign in with: