The total length of the tunnel is 10.226 km, the deepest point is from the water surface at a depth of more than 60 meters, and the maximum water pressure is 0.73 MPa. 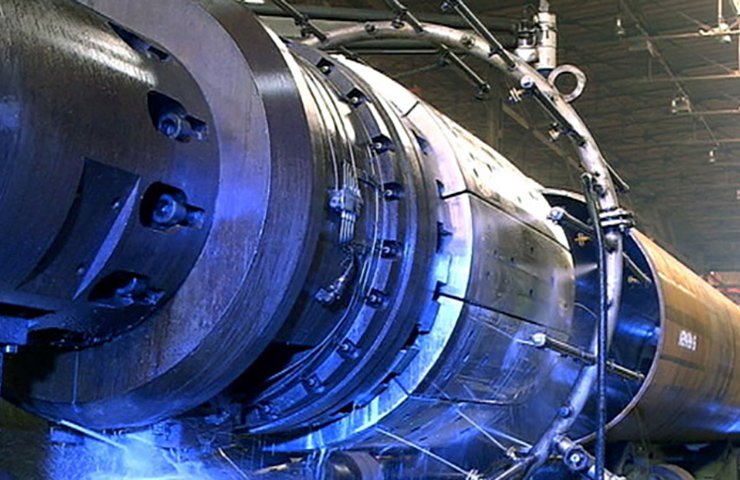 Engineering works for the construction of a shield tunnel across the Yangtze River for the construction of the Sino-Russian gas pipeline along the eastern route, which will connect Yongqing County (Hebei Province, Northeast China) and the central city of Shanghai, officially began today in Nantong City, Jiangsu Province (East China). Shield penetration length, burial depth, water pressure and many other parameters pose a challenge to the oil and gas industry.

The project is being implemented by the China Railway Tunnel Group and is a key control object of the southern section of the Sino-Russian gas pipeline along the eastern route. The crossing is located at the mouth of the Yangtze River and passes through the main channel of the river, the Great Dam and the pier. In addition, since this area is the territory of the reserve of germplasm of aquatic products, rather high requirements are put forward for the technologies and methods of construction work.

“The tunnel should run along the bottom of the Yangtze River, which has a complex shape. This poses a challenge to traditional construction technologies, ”said Liu Jianping, deputy general manager of the design department for the construction of shield tunnel for the Yangtze River Tunnel. The total length of the tunnel is 10.226 km, the deepest point is from the surface of the water at a depth of more than 60 meters, and the maximum water pressure is 0.73 MPa, he added. According to him, at the moment, from among the world's oil and gas pipelines, this project is distinguished by the largest length of shield boring, the greatest depth of occurrence and the highest water pressure.

On the construction site, a huge panel cutter blade, independently developed in China and fully owned by independent intellectual property rights, was gradually put into operation. To ensure the safety and timeliness of the shield tunneling tunnel, Nantong Haimen Power Supply, overcoming technical and construction difficulties, completed the design in just over one month. Completion of the design, installation and commissioning of a 35 kV transformer substation and external power lines ensured the successful development of the project.

As it became known, in order to protect the ecological environment of wetlands along the Yangtze River and within its water area, as well as to promote the green development of the economic belt of the Yangtze River, the principle of "zero pollution, zero discharge and zero leakage will be implemented during the construction process. ".

The southern section of the Sino-Russian gas pipeline along the eastern route runs from north to south through the provinces of Hebei, Shandong, Jiangsu and the city of Shanghai. It is expected to be completed and operational in 2025. By then, Russian gas will be supplied directly to the Yangtze River Delta region, implementing the "northern gas going south" project. After commissioning, the daily volume of gas transportation will exceed 50 million cubic meters. meters, which is almost three times the existing bandwidth.

Recommended:
Azovstal announced the complete loss of foreign markets for long products
Novokramatorsk Machine-Building Plant has manufactured a new section mill
The countries of the Eurasian Economic Union plan to completely ban the export of scrap metal
On this topic
Shanghai enters into force new rules to promote the use of cars on new energy sources
High-speed railway launched in China Beijing-Harbin highway
Full-scale construction of the southern section of the eastern route of the China-Russia gas
HPP Sanxia in China sets world record for electricity generation
Korean auto makers will switch to hydrogen engines with help from Chinese steelmakers
China's Hebei province decides to expedite the elimination of steel facilities
Add a comment
Сomments (0)
News Analytics
Rescuers continue to search for 13 missing iron ore miners in North China12-06-2021, 15:39
European Union extends protective quotas on steel supplies for another three12-06-2021, 11:31
Metallurgical plants in the temporarily occupied territory of Donbass appointed12-06-2021, 10:59
JSC "Turboatom" was visited by representatives of CJSC "Novokramatorsk Machine12-06-2021, 10:43
One of the leading mining enterprises in Ukraine announced the blocking of work12-06-2021, 10:37
Vaccinations fuel demand for platinum - World Platinum Investment Council08-06-2021, 12:55
Sharp price growth continues in the rolled metal market - Ukrpromvneshexpertiza08-06-2021, 11:04
Analysts note overheating of the global scrap metal market01-06-2021, 13:28
Hydrogen-fueled steelmaking could be competitive after 2050 - McKinsey19-05-2021, 14:22
Steel raw material prices are skyrocketing across the board18-05-2021, 12:34
Sign in with: